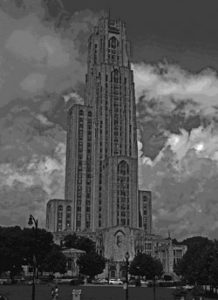 Chancellor John G. Bowman of the University of Pittsburgh commissioned the Cathedral of Learning to be built in 1921. Initially, Bowman envisioned a 52-story tower that would inspire the children of Pittsburgh to seek higher education—pun intended! It was a long and expensive venture, but Bowman’s vision came to fruition. The Cathedral of Learning quickly became an iconic symbol of the university and a remarkable educational edifice. Today, many students and residents colloquially refer to this Pitt icon as Cathy.

Before the building could begin, plans needed to be made. The university needed to acquire land, commission an architect, formulate a budget, and raise the necessary funds. Fortunately, the matter of land was solved quickly. In November of 1921, the Mellon family donated a 14-acre, $2.5 million plot of land on which to build.

Charles Zell Klauder, of Philadelphia, was commissioned to bring Bowman’s vision to life. Klauder was the foremost Gothic architect of the time and spent two years working on the design plans. The final plan was an attempt at fusing traditional Gothic architecture with a modern skyscraper. And a skyscraper it was. It was to be the tallest building in the City of Pittsburgh—and that doesn’t come cheap.

The proposed cost of the building was estimated to be between $10-15 million—quite the sum in those days. Funding for this project came in the form of monetary and material donations and grants from corporations, individuals, and foreign governments. Bowman also made sure to involve the community. He dreamed of a tower that would inspire children, so in 1925, he launched a fundraising campaign with them in mind. “Buy a Brick for Pitt” encouraged school children in the area to give $0.10 to Pitt. In return, they would receive a certificate stating that they owned a part of the cathedral. The university estimated that it issued 97,000 certificates as part of this campaign.

They broke ground for the tower in 1926. All in all, it took about a decade to complete construction. Workers completed the steel structure on October 21, 1929—one week before the stock market crash which resulted in the Great Depression. John Bowman had the honor of driving in the final rivet for the 42nd story. At 535 feet tall, the Cathedral of Learning holds the title of second tallest university building in the world—to this day. It was also briefly the tallest building in Pittsburgh until the Gulf Tower was built in 1932.

Most of the masonry was completed in a top-down approach. The exterior walls of the Cathedral are not load-bearing, which means construction of the Indiana limestone façade could start at the top of the structure. This strategy allowed for easy movement of building materials and equipment in and out of the building. Noted examples of stained glass, stone, wood, and iron work are present throughout the build.

The Cathedral hosted its first class in 1931 despite construction of the exterior continuing on until 1934. Despite interior construction carrying on into the 1940s, the official dedication of the building took place in June 1937. The final cost is estimated to have been between $8-10 million.

With 40 floors (plus a ground floor and two basements) and 2,000 rooms, the Cathedral of Learning is home to many at the University of Pittsburgh. Cathy houses scores of classrooms and administrative offices. In particular, the Dietrich School of Arts and Sciences, the School of Social Work, and the University Honors College are each primarily located in the Cathedral of Learning. Specialty spaces such as a studio theater, food court, study lounges, computer labs, and language labs are also part of the building. 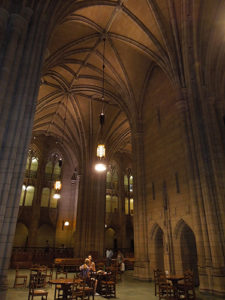 The Commons Room— a gift from Andrew Mellon—is the main room of the first floor and has always been a spot for students to congregate.  This study and event hall is a piece of true Gothic architecture. The architect, Charles Klauder designed the space to be four stories tall with a vaulted ceiling and real stone arches, strong enough to support their own weight. The use of Guastavino acoustical tiles between the ribs of vaulting helps to keep the room quiet and limit echoes. Klauder considered the Commons Room to be his greatest achievement.

Perhaps the crown jewel of the cathedral is its Nationality Rooms. The Nationality Room program began in 1926 under the direction of Ruth Crawford Mitchell and then Maxine Bruhns. Bowman and Crawford Mitchell founded the program to involve the community in the construction of the Cathedral of Learning. There are currently 31 Nationality Rooms on the second and third floors of the building. Twenty-nine of them are working classrooms, while the other two are simply for display. Each room represents and celebrates the national and ethnic groups that had an influence on Pittsburgh’s growth.

As if that wasn’t enough, there are more rooms rich with history! The Cathedral of Learning is full of other notable spaces—too many to name them all here, but let’s talk about three or four.

The Babcock Room is located on the 40th floor. It is a plush, carpeted, wood-paneled conference room, which was originally used as the University trustees’ boardroom. The room features limited access from the 36th floor. Visitors can only enter via a spiral staircase or an elevator, both of which require a key. The trustees have since outgrown this room. The university now uses the space for seminars and special events. The Babcock Room is mostly of interest today for the pairs of Peregrine falcons which have nested on the ledge outside of this room since 2002. Each spring the Pittsburgh National Aviary hosts a live stream of the Cathedral Falcons’ nest.

The Croghan-Schenley Ballroom has an interesting history. Situated on the first floor, this space is two adjoining rooms—the Ballroom and the Oval Room. A hidden passageway in the Ballroom’s fireplace connects the two spaces. These rooms originally resided in William Croghan’s Stanton Heights mansion. William S. Miller, then president of Steelwood Corp., had them dismantled and rebuilt in the Cathedral in 1955 after purchasing the Croghan mansion. Croghan, the father of Mary Elizabeth Schenley, built his house in 1830. After he died in 1850, Mary Schenley had the property managed by caretakers, as she spent most of her time in Europe, following her elopement at age 15.

The Frick Auditorium is a Fine Arts lecture hall on the third floor of the Cathedral of Learning. Its biggest feature is the Nicholas Lochoff reproduction of The Resurrection by Piero della Francesca. Helen Clay Frick purchased this work of art specifically for this space. For anyone interested in theatre arts, the Richard E. Rauh Studio Theatre resides in Cathy’s basement. It is a black box space that allows for reconfiguration depending of the production’s set requirements. This theatre has hosted several types of events such as: student-directed productions, Dark Night Cabaret, and Friday Nite Improvs (Pittsburgh’s longest-running theatre show). 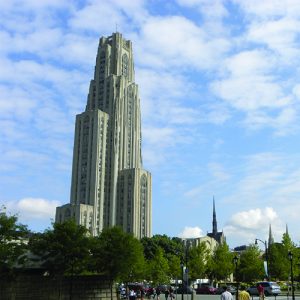 Even today, Cathy is a beloved part of the University of Pittsburgh’s main campus. Many students spend most of their days in and around this building. The Cathedral of Learning is more than a space for education; it is a place for relaxation and entertainment. It is a beacon guiding Panthers home. When the weather is nice, students fill up the lawn, having fun and soaking up the sun. After Pitt wins a football game, the Cathedral illuminates the top floors with yellow “victory lights,” signaling time to celebrate. Oakland residents and students often use the landmark as a guide when lost on the streets of Oakland after a night of celebration.

The Cathedral of Learning—a skyscraper dedicated to education—is, and always will be, a symbol of the University of Pittsburgh.