Pittsburgh Fountains: There’s Something in the Water

The Pittsburgh area is home to several impressive theatrical venues such as Heinz Hall, the Benedum and Byham theaters. However, there is a thriving theater culture beyond the Cultural District. The following are some of the other theatrical venues in the area that help to create a vibrant cultural scene.

The Apple Hill Playhouse is a community theater located in Delmont and stages adult and children’s performance in a renovated 19th Century barn.

The Comtra Theatre began in a tent in a parking lot in 1983 in Cranberry Township and then moved into an old barn on Route 19 that was renovated to become a theater-in-the-round. The name derives from the two traditional theatrical forms—Comedy and Tragedy. Volunteer actors perform the productions.

The Legacy is located on the campus of UPMC’s Cumberland Woods Village, a retirement community in Allison Park near UPMC Passavant Hospital. The Legacy stages productions, movies, and seminars.

Located in Allegheny Square on the city’s North Side in what was once the first Carnegie Music Hall, the theater hosted Pittsburgh Public Theater productions for 24 seasons. When the PPT left, it was transformed in 2004 to the New Hazlett Theater, and the nonprofit theater stages a variety of performance art disciplines.

A multi-purpose venue, The Oaks Theatre features live comedies, entertainment, movies, and events. Originally opened in 1938 as a movie theater in Oakmont, the theater was renovated in 2015.

Located in Greensburg, The Palace Theatre was once the Manos Theatre, a vaudeville movie house. In the 1990s, renovations began on the old building, and today it hosts stage productions and concerts.

For 85 years, the Pittsburgh Playhouse was located in Oakland. In the 1970s, the playhouse became affiliated with Point Park University, and the university opened a new state-of-the-art theatre in 2019 at 350 Forbes Avenue in downtown Pittsburgh.

Italian immigrants Gioachino and Rosalia Sapienza opened The Strand Theater in Zelienople in 1914. Two-thirds of the building was a theater and the other third was the Sapienza’s Fruit Market. The theatre closed in 1980 but in 2001, the Strand Theater Initiative was launched, which renovated the building. The Strand Theater reopened in 2007. Stage productions, movies and live entertainment enliven the newly refurbished theater. 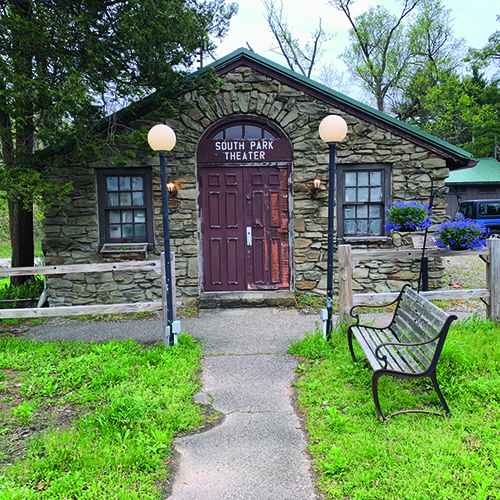 Established in 1995, the South Park Theatre is located inside South Park at the corner of Brownsville Road and Corrigan Drive, and it also has an outdoor venue. It stages adult and children’s productions.

Want to be included on this page? Click here.