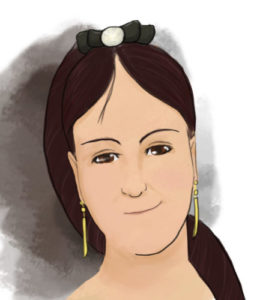 The name Schenley has been immortalized all over Pittsburgh. If Mary Elizabeth Croghan Schenley were alive today her name would certainly be in the headlines of gossip sites. She is a descendant of one of Pittsburgh’s most illustrious families. Mary was born on April 27, 1826, in Louisville, Kentucky. Her parents are William Croghan, Jr. and Mary O’Hara. Mary was the daughter of a famous Pittsburgh pioneer and businessman, Colonel James O’Hara. After his time in the Revolutionary War he established the Pittsburgh Glassworks and the Pittsburgh Point Brewery. He invested heavily in ironworks, shipbuilding, sawmills, and salt businesses. His name is attributed to streets in Pittsburgh and O’Hara Township, but even his distinguished name would be eclipsed by his granddaughter’s.

Mary Schenley’s had a tragic beginning. Mary’s mother died before her first birthday. The following year her only brother passed away. William Croghan and Mary moved to Pittsburgh where he was admitted to the bar and began to practice law. After her mother’s passing Mary was the only living heir to a vast estate. It included all the land amassed by her maternal grandfather, Colonel James O’Hara, making the young Mary Elizabeth the largest landowner in Allegheny County.

In 1830, William Croghan built a 22-room Greek Revival style mansion in the Stanton Heights area of the city. Like many wealthy families of that time, Croghan sent his daughter to finishing school on Staten Island. While at Mrs. McLeod’s School she met 43 year old Capt. Edward W. Schenley. Mary was only 15 at the time but she fell in love with the British officer. They eloped in 1842. It was Schenley’s third elopement. His previous two wives had passed away but were also from distinguished families. Many considered Schenley a fortune-hunter.

It is reported that William Croghan fainted when he heard of his young daughter’s elopement with a man nearly three times her age. Theirs elopement was heard around the world. Croghan demanded that the federal government in Washington, D.C. intercept their ship. He insisted that the Pennsylvania General Assembly in Harrisburg intervene. The ship was not intercepted as Croghan had hoped. According to a news clipping at the Carnegie Library of Pittsburgh, Schenley stopped on an island, which many believe to be Bermuda, to avoid interception.

Ministers and newspapers denounced the elopement. The March 4, 1888 issue of the Pittsburgh Dispatch stated: “When the news of Mary’s elopement reached Pittsburgh, it created a profound sensation in society and other circles. Dr. Upfold denounced the school and the governess that would permit, if not arrange, for elopements, and Mr. Bissell, Mr. Bayard, and other Pittsburghers who had their daughters there were not slow in summoning them home. It resulted in the breaking up of the school…” Mrs. McLeod’s school failed. Croghan was eventually successful in spurring the state legislature to pass a bill, signed by the governor, which placed all of Mary’s inheritance in his hands and, upon his death, in the care of trustees “who are to pay at their discretion for her support.”

This side of the Atlantic wasn’t the only place in an uproar over the elopement. In England, Queen Victoria refused to receive the couple at court. Eventually Croghan’s heart softened toward Mary and her husband. He visited them in England. The Schenleys were living under dire financial circumstances. The merciful Croghan bought a house in London for the couple. He also arranged for them to have an allowance. Croghan wished for the couple to return to Pittsburgh and live with him in the “Picnic House” mansion. He even built a large addition onto the mansion which replicated their home in London. They didn’t move but but did come to visit. Mary was asthmatic and the air in Pittsburgh was heavily polluted. It was difficult for her to live in the city.

Mary and Capt. Schenley had seven children. Her father died in 1850 and it was then that Mary came into her inheritance. It was valued at a staggering $50 million Most of which was in real estate. Picnic House was never again permanently inhabited. Until 1912 Elizabeth Koehler remained there as its caretaker.

Mary would visit the home but remained in England. One of her holdings was the The Point. She was heavily criticized for its terrible condition. Mary would come to donate land for the site of West Penn Hospital, Western Pennsylvania Institute for the Blind, the Newsboys Home, a $10,000 subscription for Riverview Park, and a gift of the Block House at The Point to the Daughters of the American Revolution.

Her largest gift to the area came after the death of her husband in 1889. For decades, the city of Pittsburgh had its eyes on Schenley land for a park in Oakland. Edward Manning Bigelow, the “Father of Pittsburgh Parks,” was the first Director of Public Works for the city. He got wind of news that a land developer was heading to London to approach Mary Schenley about making a deal for her land. Bigelow quickly dispatched an attorney, who arrived before the developer, and persuaded Mary to donate her land to the city. Her three stipulations were that the land be used for a park, be named after he and that the land never be sold.

Schenley donated 300 acres. This gave the city the option to purchase another 100 acres. 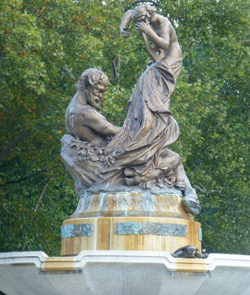 In 1903 Mary passed away in England. To express its gratitude the city memorialized its benefactress with a beautiful fountain in what is now known as Schenley Plaza. The Mary E. Schenley Memorial Fountain, entitled A Song to Nature, was dedicated on September 2, 1908. On its 100th anniversary the City of Pittsburgh and Pittsburgh Parks Conservancy restored and lit it.

In 1909, the Stanton Heights Golf Club leased the land of the Croghan Estate. They would sometimes hold events in Picnic House. A steel company owner, William Miller, purchased the mansion in 1955. He would then have the mansion’s ballroom and oval foyer dismantled and rebuilt in the University of Pittsburgh’s Cathedral of Learning. The rest of the mansion would be torn down. In 1982, the Croghan-Schenley rooms were completed and remain
a major attraction. There are rumors that the rooms are haunted with the spirit of Mary Schenley residing behind a false fireplace.

Mary Schenley is remembered in many ways. Her name can be seen all over the city. From Schenley Park, the Schenley Fountain, to the Block House. Other places that carry her namesake are Schenley High School, Schenley Hotel (now the University of Pittsburgh’s Student Union), Schenley Bridge, Schenley Plaza, Schenley Quadrangle, and the Schenley Tunnel. Time has been kind to Mary E. Schenley. The girl once scandalized the nation and England. Only to become an important philanthropist and forever remembered by Pittsburgh.