“Anytime you have an opportunity to make things better and you don’t, then you are wasting your time on this Earth.”
~Roberto Clemente 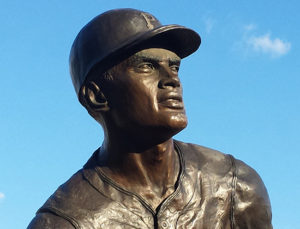 Pittsburgh awoke to a big snow storm on New Year’s Day in 1973. The news that greeted Pittsburghers that day was tragic and unbelievable. Their star Pirate baseball player, Roberto Clemente, had been taken from them in the prime of his life. That morning is one that Pittsburghers of the 70’s will never forget.

Roberto Clemente was the youngest of seven children and grew up in a poor household in Carolina, Puerto Rico. It was in Puerto Rico that he learned to love baseball.

Roberto’s major league career began with the Brooklyn Dodgers in 1954. Clemente was not their star player; in fact he did not play in a single game. He was soon returned to the minor leagues. Despite being kept somewhat hidden, he managed to catch the eye of the Pirate’s general manager. On November 22, 1954 he was signed by the Pirates for a sum of $4,000. At that time any player who signed with a professional team for $4,000 or more had to be kept on the major league roster for that first season or be available for drafting by other clubs. Clemente spent his entire career with the Pittsburgh Pirates while wearing the number 21 on his uniform.

A Star is Born 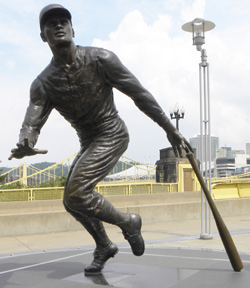 Given a chance, Roberto Clemente soon proved himself a star baseball player with a strong throwing arm and a unique batting style. Times were not always easy for Roberto. He had a heavy Spanish accent and was discriminated against by some for being a foreigner. Being black at a time when the country was racially segregated was also a hardship for him. Despite that, Clemente won 12 consecutive Gold Glove awards, earned the National League MVP in 1966, won four batting titles, was named the 1971 World Series MVP and reached his 3000th hit on his last game of the regular season in 1972. He was one of the greatest baseball players to play right field. Pittsburgh was fortunate to have Clemente on their roster for 18 seasons.

When Nicaragua was hit with a massive earthquake in December 1972, Clemente decided to take relief supplies to the stricken nation himself after learning the Nicaraguan army was stealing supplies meant for the people. Not long after takeoff from the San Juan airport on December 31, 1972, the DC-7 plane crashed into the Caribbean Sea. Sadly, there were no survivors.

The five-year waiting period was waved by the Baseball Hall of Fame. Clemente was inducted only months after his death. This made him the first Latino inductee. Clemente was not only a great ball player and a humanitarian, but he was an inspiration for a whole nation.

Today a bridge is named for him, “The Roberto Clemente Bridge.” It becomes a pedestrian-only bridge for Pirate home games and leads directly into PNC Park. In 2002 September 18 became known as “Roberto Clemente Day”. It was first announced by the Major League Baseball Commissioner, Bud Selig. Even those who were not alive during Clemente’s time as a Pirate know his great story.

Former MLB Commissioner Bowie Kuhn summed up Roberto Clemente perfectly by saying, “He gave the term ‘complete’ a new meaning. He made the word ‘superstar’ seem inadequate. He had about him the touch of royalty.” Roberto Clemente continues to inspire people to this day. Clemente never forgot where he came from and was always willing to help those less fortunate than himself. Roberto Clemente is another reason why Pittsburghers are so proud of their great city.