The records for leaders in Pittsburgh go back to the year 1794 with George Robinson as the first of eight Chief Burgesses of Pittsburgh. Then, in 1816, Pittsburgh incorporated as a city and the first mayor was appointed by the city council. Here’s a brief bio of each Pittsburgh mayor, from present day to 1816.

Ed Gainey (2022-present), Democrat
On January 3, 2022, Pittsburgh swore in its 61st mayor, Edward C. Gainey. Mayor Gainey is the city’s first African American mayor. In the primary election, Gainey narrowly defeated incumbent Bill Peduto 25,784 votes to 22,029 votes. The November 2021 general election was a decisive victory over Republic nominee, Tony Moreno. Ed Gainey won the race for Mayor of Pittsburgh with more than 70% of the electorate’s vote. Ed Gainey was born on February 19, 1970, to a single teenage mom, who raised him with the help of his grandmother in their Hill District home. By the age of seven, Gainey and his family had moved to South Oakland, and then again to East Liberty, where he attended Peabody High School (now the Barack Obama Academy of International Studies). After high school, Gainey attended Morgan State University in Baltimore, Maryland where he earned a bachelor’s degree in Business Management. While at Morgan State, Gainey met Mayor Kurt Schmoke, the first politician he had ever encountered. As the first Black mayor of Baltimore, Schmoke inspired Gainey to pursue a career in public service. After graduating, Ed returned to Pittsburgh with a clear vision. Gainey served as a Community Development Specialist under two Mayors, Tom Murphy and Luke Ravenstahl, and worked with the Pittsburgh Bureau of Police to improve hiring practices. In 2012, he was elected to the Pennsylvania State House of Representatives. In this position, Ed was recognized by the Pittsburgh City Paper as “2020 Politician of the Year” for his work to educate, as well as uplift the communities he represented. Ed and his wife Michelle (Coburn) Gainey have been married since 2006 and have three children together. Their oldest daughter is a graduate of California University of Pennsylvania (undergrad) and Villanova University (master’s degree). The couple’s two younger children attend Pittsburgh Public Schools. Ed and Michelle raised their children to understand the importance of being involved in their community.
Bill Peduto (2014-2022), Democrat
After serving on Pittsburgh’s City Council, Bill Peduto was elected as Pittsburgh’s 60th mayor. He served on City Council from 2002 until 2014. A graduate of Chartiers Valley High School, he attended Carnegie Mellon for one year and then transferred to Penn State where he attained a B.A. in 2007. He received a master’s degree from The University of Pittsburgh. Prior to serving on City Council, he operated a political consulting firm and worked for several Democratic candidates and elected officials. He ran for mayor in 2005 and lost to Bob O’Connor. After the death of O’Connor in 2006, City Council President Luke Ravenstahl assumed the position of mayor. In a special election in 2007, Peduto challenged Mayor Ravenstahl but ended his campaign prior to the primary. He mounted another campaign for mayor and was elected in November 2013 garnering 84% of the vote. He was re-elected in 2017 with 96% of the vote.
Luke Ravenstahl (2006-2014), Democrat
Just one hundred minutes after the death of Bob O’Connor on September 1, 2006, City Council President Luke Ravenstahl was sworn in as the 59th mayor of Pittsburgh. Because of Mayor Bob O’Connor’s death, a special election was held in 2007. Mayor Ravenstal won with 63% of the vote. Mayor Ravenstahl took office at age 26, making him the youngest man to hold the office of Pittsburgh Mayor and also one of the youngest mayors of any major city in the United States. 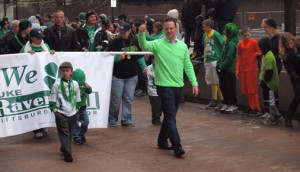 Mayor Ravenstahl worked to keep Pittsburgh on the cutting edge of being a “green” city and a national leader in green building initiatives and clean energy businesses. He was a co-creator of the Pittsburgh Promise, an initiative to invest in the future of children that graduate from the city of Pittsburgh public schools by providing funds to help with their college education. In addition, Mayor Ravenstahl continued the “Redd Up” campaign started by Mayor O’Connor and installed a 311 Response Line for the city. In February 2013, after announcing his plans to run for re-election, Ravenstahl withdrew from the race, citing personal reasons. The years Luke Ravenstahl served as mayor of the City of Pittsburgh were good years for the city’s economy. Some say that he and his team were responsible for the city’s prosperity during that time. Others feel that his group just rode the economic wave. And still others believe it was probably a bit of each.
Bob O’Connor (2006), Democrat
Bob O’Connor got into politics a little later than most when in 1991, at the age of 45, he was elected to City Council. Prior to entering public life, Bob O’Connor was a Vice President for Pappan Enterprises, a franchise of the Marriott Corporation. He was responsible for managing 36 restaurants in the Pittsburgh area and over 1000 employees. True to form, Bob practiced good public relations. The day after the election, he stood outside on a busy street corner holding a sign that said very simply, “Thanks.”

Westinghouse, another powerhouse in Pittsburgh, fell on hard times with a bankruptcy and an eventual move to New York. The “Steel City” was left without a single major steel mill in the city. Pittsburgh, once able to boast of having many Fortune 500 companies headquartered here was down to less than ten. Given the loss of the companies and the industries Pittsburgh once depended upon, it is amazing that Caliguiri was able to accomplish as much as he did. Sadly, in the late 1980s, Mayor Caliguiri was diagnosed with amyloidosis, a rare and often fatal protein disorder. Fighting to the end, Caliguiri lost his battle with the disease in 1988 at the age of 56. Richard Caliguiri is not to be forgotten though. Every year in September there is a Richard S. Caliguiri Great Race in the city. Today a statue of Caliguiri, sculpted by Robert Berks in 1990, stands on the steps of the downtown Pittsburgh City County Building on Grant Street. Richard Caliguiri is buried in Calvary Cemetery.
Peter F. Flaherty (1970-1977), Independent/Democrat
Pete Flaherty first served his nation as a navigator in the Army Air Corps in WWII. Afterward he graduated from the University of Notre Dame Law School and served as an Assistant District Attorney for Allegheny County and served on City Council before reaching the mayor’s office. Pete Flaherty campaigned as a democrat for mayor by promising to return the mayor’s office to the neighborhoods instead of the special interests. His main focus as mayor when he took office in 1970 was on the infrastructure of the city and the tax burden which had been increasing every year over the previous ten years before he took office. 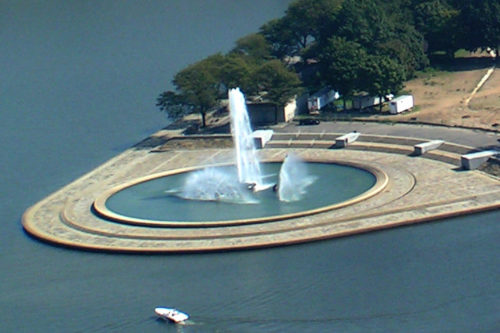 National headlines were made by Mayor Flaherty when, during the strike of the refuse collectors, he and his administrative staff used rental trucks to collect refuse during the strike. In addition to the strike of the refuse collectors his first year in office, he had to deal with the telephone operators’ strike and postal workers’ strike, as well as the Blue Flu of the city police force. During his tenure, Mayor Flaherty balanced the city budget each year without increased or new taxes and was the one to turn on the new fountain at Point State Park in 1974 The fountain at the Point became the city’s signature attraction and is a great place to relax and cool off on a hot day in the mist. When Flaherty left office in 1977 he left the city with a substantial budget surplus and the residents with a lower tax burden. He utilized the city employees to improve the city roads, collect refuse, and staff the first city emergency ambulance system. He reduced pollution in the city by converting some coal furnaces to gas heat throughout the city and increased the efficiency of the Water Department by putting in a modern centralized water filtration system. Under his leadership, the City of Pittsburgh was the first city in the state to adopt affirmative action programs for minorities and women. While Flaherty was in office the Steelers won two Super Bowls, 1974 and 1975, and the Pirates won the World Series in 1971. Right after leaving his post as mayor in 1977 he went on to be appointed as Deputy Attorney General of the United States under the Carter Administration. He returned to Pittsburgh and was elected County Commissioner in 1983. He died at the age of 80 in 2005. Peter Flaherty is buried in Calvary Cemetery.
Joseph M. Barr (1959-1970), Democrat
Joseph Barr was the youngest man up until that point to be elected as a State Senator in 1940. He stayed in the State Senate for 20 years before looking to the mayor’s office. Mayor Barr had a calm demeanor which served him well during the turbulent times he was in office. He worked hard to create additional office space in Pittsburgh and also promoted Pittsburgh as the ideal home for any corporation. Mayor Barr focused on better street lighting and improving the city’s water plant. It was during his term that the Civic Arena was built, a crown jewel for the city at the time. Joseph Barr is buried in St. Mary’s Cemetery.
Thomas Gallagher (1959), Democrat
Thomas Gallagher was the President of the City Council when Mayor David Lawrence was elected governor of Pennsylvania. He filled the mayor’s post until Joseph Barr was elected just nine months later. Thomas Gallagher was Pittsburgh’s oldest mayor taking the office at the age of 75.

During his brief tenure as mayor, Thomas Gallagher met Nikita Krushev, the head of the Soviet Union, at the Pittsburgh airport. It was during his time in office that the Fort Pitt Bridge opened, giving anyone coming to the city through the Fort Pitt Tunnels a stunning view of the city. After his position as mayor ended he returned to serve on City Council. One of the overlooks on Mount Washington is named after this mayor. Thomas Gallagher is buried in Calvary Cemetery.
David L. Lawrence (1946-1959), Democrat
In 1945, David L. Lawrence, an Irish Catholic Democrat, was elected mayor of Pittsburgh by a slim margin. At the time, Pittsburgh was not a pretty place. The smog was so thick that it was not unusual for men to change their white dress shirts in the middle of the day because they would become dirty from the air. It also was not unusual for the street lights to burn in the middle of the day for the same reason. The industrial pollution was ruining the rivers, making the air unhealthy to breathe and was forcing many companies to consider leaving the Pittsburgh area. Within days of taking office in 1946, Mayor Lawrence created a seven-point program to help with the city’s urban renewal. Since Republicans were still very much in control of the city, Lawrence, a Democrat, had to find a way to form alliances with the other side. Lawrence and Richard K. Mellon, a staunch Republican and chairman of one of the largest banks in the United States, found common ground as early environmentalists and an interest in reviving the city. The projects completed during his four terms as mayor, along with the help of Mellon, became known as Pittsburgh’s “Renaissance I.” The first task Mayor Lawrence took on was to free the air of smog. With that accomplished, he moved on to building a collection of skyscrapers in the city, new bridges, airport, parks, medical centers, expressways, public housing units, a civic and cultural center, and expanding the universities.