Explosions, fires, floods: it sometimes seems as if we are living in cataclysmic times, but if you open a book on the history of Pittsburgh, you’ll find that horrific disasters have happened before. For the most part, they have simply faded from our collective memory.

While many are familiar with the Great Chicago fire of 1871 and the legend of Mrs. O’Leary’s cow, few are familiar with the devastating fire that swept through Pittsburgh decades earlier on April 10, 1845. At that time, Pittsburgh was an industrial powerhouse and a booming town of 20,000. The population was a mix of English, Scottish, and German descent and scores of immigrants who had come to the area to work in the iron and glass works and to construct the Pennsylvania Canal. Due to the rapid growth of the area, the public works could not keep up with the demand. There were only 10 fire companies to protect all the homes and businesses, and most of these were wooden structures. The water pumping system was also deficient: only two water lines supplied the city and water pressure was notoriously low.

It is hard to imagine what Pittsburgh was like in those days, but literary great Charles Dickens visited in 1842 and described the city as “having a great quantity of smoke hanging over it.” That smoke was a flammable brew of soot, coal dust, flour, and cotton fibers released into the air from the industries thriving in the city. This industrial residue coated everything in the area.

The weeks preceding the Great Fire of 1845 had been unusually dry for spring, and April 10 dawned a very windy day. Legend has it that the blaze began around noon when a woman lit a fire near Ferry and Second Streets intending to wash laundry. The gusting wind carried a spark to a nearby ice house, which quickly went up in flames. Driven by the wind and nourished by the tinder-like dryness and flammable soot, the fire quickly spread.

A publication called “The Mystery” described the conflagration: 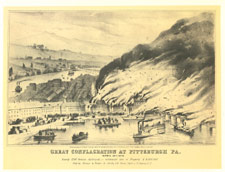 “The fire, as though impelled by the hand of the Destroying Angel rolled on from building to building, with the flight of a fiery flying serpent, consuming every house with the angry fury of a Vulcan, speeding its way with awful and terrific progress, threatening the whole city, inhabitants and all, and only ceased its mad career in the line of the river, because there was nothing more for it to destroy, having swept every thing in its way for one mile and a quarter!”

By the next day, more than a third of the city, 60 acres, lay in smoldering ruins. Countless homes and business were lost in the flames. Miraculously, only two lives were lost. For a time residents despaired, but then they began to rebuild. In the aftermath, the price of property soared and the demand for construction materials revived the city’s industrial base and spurred the area’s recovery.

With three rivers flowing through the area, flooding has naturally been a concern for Pittsburgh. While the fire of 1845 was due in part to a dry spring, another devastating disaster came from an over abundance of rain and snow melt.

On March 14, 1907, heavy rain combined with a quick snow melt sent the rivers in Pittsburgh over their banks. Bridges collapsed, towboats capsized, and towns all up and down the Allegheny, Ohio, and Monongahela Rivers were submerged. Flooding began at 20 feet and the deluged topped out at 35 feet. This was 13 feet over the danger line and marked the highest the rivers had crested in 75 years.

Ironically, nearly to the day 29 years later on March 17, 1936, the Pittsburgh area once again found itself underwater in what has become known as the Great St. Patrick’s Day Flood. Once again heavy rains and rapidly melting snow sent the rivers rising. The flood claimed 62 lives, with 500 injured and 135,000 people left homeless. The city suffered millions of dollars in damages to homes, businesses, and industries.

Another disaster that wreaked havoc on Pittsburgh could have been avoided. On November 14, 1927, 28 people were killed and between 500 and 600 were injured when an enormous gasometer, a gas storage tank, exploded in what was often referred to as the Equitable Gas Explosion.

Located on the North Side, on Reedsdale Street, near the present site of the Rivers Casino, the gas tank at the time was the largest in the world.  When filled, it contained 5,000,000 cubic feet of natural gas. Weeks before the explosion, the tank had been emptied, but when a leak was reported in the tank repairmen went to repair it with blow torches. Remaining vapors in the tank exploded. The enormous circular tank shot into the air and then exploded over the North Side. Eyewitnesses said the tank “shot into the air like a balloon. A ball of fire traveled higher than the tip of Mt. Washington, across the Ohio River from the scene. Sections of the steel framework went up hundreds of feet to crash through roofs and into the streets.” 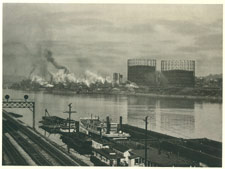 Debris from the tank rained over the North Side. The force of the blast knocked down homes, telephone, and power lines. Residents were blasted out of their beds and police officers rescued a small child who had landed in the Ohio River. Water lines were severed, and flooding the devastated region. Windows downtown were shattered and frantic survivors lined up at the morgue to search for relatives. The tanks were never rebuilt as that area of the North Side tried to recover.

Each tragedy above devastated the area and changed the city. Pittsburghers rose to overcome them and will continue to every time.