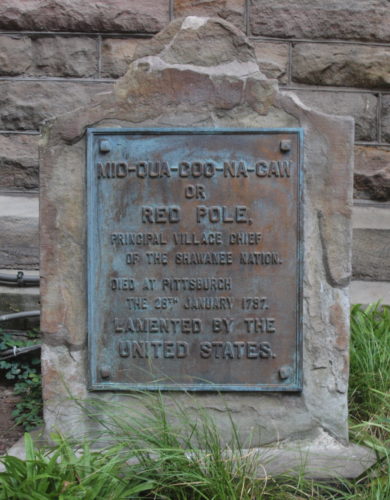 The first documented evidence of religious influence in Pittsburgh dates back to the Native Americans. When the settlers first arrived here, they found a small hill near what is now Sixth Avenue in downtown Pittsburgh. This hilltop had been used by local Native Americans as a burial ground. It is believed that the site was selected because of its elevation. It was high enough and far enough away from the confluence of the three rivers to protect this holy site from flood waters. As each wave of settlers came and lived and died here, they also buried their dead at the site. At one time, nearly 4,000 people were buried there.

Today, the burial ground is much smaller with approximately 150 graves remaining. Located in the heart of downtown Pittsburgh between Trinity Cathedral and First Presbyterian Church, the burial site is the final resting place for some of the area’s earliest residents including Red Pole, Chief of the Shawnee Nation and Dr. Nathaniel Bedford, the city’s first physician and founder of the University of Pittsburgh. A restoration project to coincide with Trinity Cathedral’s 250th Anniversary included the renovation and preservation of the burial grounds.

The first official church in the area was a small log chapel constructed by the French at Fort Duquesne and was called the Church of the Assumption of the Virgin Mary. After the fort fell to the British and was renamed Fort Pitt, Anglican services were held at the fort for the settlers. In 1787, the Penn family donated several large plots of land near what is now known as Sixth Avenue and Smithfield Street to the various Protestant denominations establishing settlements in area.

The Presbyterians erected First Presbyterian Church; the Episcopalians, Trinity Cathedral; and the German Evangelicals what is now the Smithfield United Church. The First Presbyterian Church is also noted for its magnificent Tiffany windows. The first place of public worship for Catholics was near Fort Duquesne in 1754. But from the French defeat in 1758 until 1808, there was no public Catholic worship. A church that no longer exists was eventually established at the corner of Liberty Ave and Washington Place. These are the city’s oldest churches, and the burial grounds are all within walking distance of each other. They are a must see for residents and visitors alike. 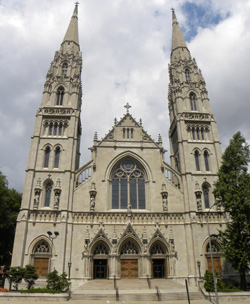 Not until the middle of the 19th Century were there enough Catholics residing in the area to form a diocese. In 1843, the Diocese of Pittsburgh was established. In 1906 St. Paul Cathedral was constructed in Oakland. Over the decades, numerous Catholic churches were built.

One of the most noted is St. Anthony’s Chapel in the Troy Hill section of the city. It has the world’s largest public collection of Holy Relics. St. Anthony’s has amassed a collection of more than 5,000 relics and attracts pilgrims from all over. Another Catholic church that attracts many of the faithful is St. Patrick’s located in Pittsburgh’s Strip District.

This tiny church is noteworthy for its statuary garden and for its Sacra Scala or Holy Stairs, which represent the 28 steps between Jesus and Pontius Pilate when he condemned Jesus to death. The original Holy Stairs were taken from Jerusalem to Rome in the 4th Century. Visitors ascend the replica of the Holy Stairs on their knees as a sign of devotion.

St. Nicholas Croatian Church in Millvale, the oldest Croatian Church in America, is distinguished by its dramatic tempera murals. Painted by Maxo Vanka, the murals tell the story of Croatian immigrants to American and the turmoil that took place in their native land.

Because Pittsburgh was settled by many different Eastern Europeans cultures, the area has numerous Orthodox churches, from Carpatho-Russsian Orthodox to Ukranian Orthodox with every ethnicity in between represented. Orthodox churches are noted for their magnificent icon screens, making each church more opulent than the next. 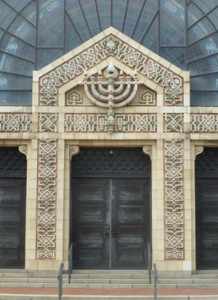 Besides Christians, other faiths have had a long history in Pittsburgh as well. Before 1850, there were very few Jews living in Pittsburgh. As more came to the area, they built temples and synagogues. One of the most beautiful synagogues in the city is Rodef Shalom located on Fifth Avenue. Rodef Shalom is also home to the Biblical Botanical Garden, which was established in 1987 and features plants mentioned in the Bible and indigenous to the Holy Land. It is the largest garden of its kind in North America and attracts many visitors.

Another majestic house of worship is the Sri Venkateswara Temple located in Penn Hills. This temple built in 1978 is the center of religious life for Hindu worshipers. The gleaming white temple is patterned after the sacred Tirupati Venkateswara Temple in Andhra Pradesh, India. Not only does the temple attract Indians living in Pittsburgh, but it also attracts those from around the world.

The region has also been home to a faith that has since died out. In 1804, George Rapp and his followers immigrated to America from Germany. This Separatist sect came here seeking religious and economic freedom. The nearly 800 farmers and craftsmen settled in Butler County establishing the town of Harmony. They left the state briefly to settle in Indiana, but returned in 1824 to Beaver County, where they established a new settlement now known as Old Economy Village.

The community believed that Jesus’ return was imminent and, therefore, took a vow of celibacy. Economically, the community was a thriving one, but due to the lack of offspring, the community began to dwindle. One-third left to follow a self-proclaimed prophet and by the dawning of the 20th Century few Harmonists remained.

Six acres of the village and its buildings were acquired by the Commonwealth of Pennsylvania. This historic site provides a trip back in time and an insight into the beliefs of this Utopian community.

In addition to this historic site, the Pittsburgh area is home to two churches listed on the U.S. National Register of Historic Places: St. Boniface Roman Catholic Church on the North Side in the East Street Valley and Emmanuel Episcopal Church also located on the North Side on North Avenue. Emmanuel Episcopal is known as the “Bake Oven Church” because of its brick-bake oven shape. St. Boniface is known for its Romanesque Revival, Byzantine Revival and Italianate architecture.

Pittsburgh has such a rich religious heritage, you could spend a lot of Sundays visiting all of these spiritual sites.