Pittsburgh Cemeteries Are Alive with History

Nobody likes to think about dying and being buried.  If you can put aside that natural aversion to death we’re sure you’ll find the cemeteries around Pittsburgh both interesting and educational.  A visit to one of these places can provide lessons in history, architecture, local customs, and religious beliefs and practices.

One of the oldest cemeteries in the area is the Indian burial mound in McKees Rocks. The mound is approximately 2,300 years old. Anthropologists believe it to be the burial grounds for the Adena people who inhabited the area between 200 B.C. and 100 A.D.  Later the Hopewell people used it. In the late 1800s, Andrew Carnegie had the mound partially excavated. Thirty-three skeletons along with stone, copper, and shell artifacts were unearthed. Those artifacts were on display at the Carnegie Museum until the late 1970s.

The mound, which is 85-feet wide and lies near the Ohio River, in what has become an industrial area. The Burial Mound was granted a historical marker by the Pennsylvania Historical and Museum Commission in 2002. There is talk of returning the Indian remains to the burial mound and having the area designated a UNESCO World Heritage Site.

The first settlers who came to the area found a small knoll near what is today Sixth Avenue in downtown Pittsburgh.  This hill had been used by Native Americans as a burial ground because it was elevated enough and far enough from the confluence of the three rivers to protect the site from flood waters.  Nearly 4,000 people were estimated to be buried on the knoll at one time.

The grave of Chief Red Pole of the Shawnee Nation remains in the heart of downtown Pittsburgh between Trinity Cathedral and First Presbyterian Church. (Dr. Nathaniel Bedford, the city’s first physician and founder of the University of Pittsburgh, is also buried there.) Today, only approximately 150 graves remain in that location. 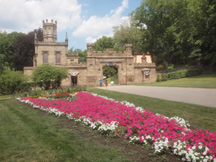 Many come to visit Allegheny Cemetery to take in the scenery.  It is one of the most peaceful and picturesque places in the city as it abounds in natural beauty.  The architecture of the Butler Street gate area as well as the wide array of bronze, granite, and marble sculptures enchant those who have an eye for beauty.

In 1886, the Diocese of Pittsburgh founded the Calvary Catholic Cemetery.  It is located in the Greenfield and Hazelwood neighborhoods of Pittsburgh. The 200-acre cemetery is the final resting place for well over 152,000 individuals.

The National Cemetery of the Alleghenies

Some noted Pittsburghers’ graves do not reside in cemeteries. Renowned astronomer, John Brashear, and his wife, Phoebe, had their ashes interred at the Allegheny Observatory in Riverview Park on Pittsburgh’s North Side. Their crypt below the observatory is inscribed with the words:

“Though my soul may set in darkness;
it will rise in perfect light;
I have loved the stars too fondly
to be fearful of the night.” 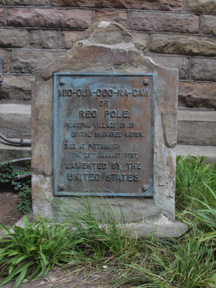 It seems that cemeteries and burial practices are reverting back to simpler methods.  Recently, Pennsylvania’s first “green burial only” cemetery, Penn Forest Natural Burial Park, opened in Penn Hills.  The “natural” or “green” burial employs no toxic chemical embalming fluids. The bodies are buried close to the ground’s surface in a biodegradable casket or cloth wrap. Causing the body to decompose naturally and provide nourishment for plant growth.  Loved ones can choose between native stones laid flat on the ground, shrubs or trees as markers.  Several local funeral homes have obtained green certification.