Pittsburgh’s military history reaches as far back as the founding of our nation.  George Washington began his military career in Western Pennsylvania during the French and Indian War.  In 1758, he and General John Forbes drove the French out of Fort Duquesne.  The fate of over half of North America was decided right at “The Point.”

Gateway to the West

At the beginning of the 19th century, Pittsburgh was the “Gateway to the West.”  Settlers heading for the new frontier came to Pittsburgh to board flatboats and embark on new lives.  Due to escalating tension with the British Empire, the War Department decided that the area would be an ideal site for an arsenal.  Colonel William Foster, the father of noted Pittsburgh composer Stephen Foster, sold 30 acres of property to the government. That area is now known as Lawrenceville.

Conflict with the British eventually erupted into the War of 1812. This gave rise to one of the area’s greatest naval battles.  Commodore Perry was the hero of the Battle of Lake Erie. Many places in Pittsburgh bear his name.  Many are unaware that there were two Perry men in these battles.  Oliver Hazard Perry commanded his younger brother Matthew C. Perry in this critical battle.  They were both instrumental.

Commodore Oliver Perry’s flagship, the USS Lawrence, was destroyed in the battle. Perry rowed a half mile under heavy fire. He  carried his battle flag, “Don’t Give Up the Ship,” and establish his command on the USS Niagara.  The Niagara was nearly destroyed but the British was defeated. Reporting to General William Henry Harrison with the famous words:  “We have met the enemy and they are ours,” thus establishing him as the “Hero of Lake Erie.”

No Civil War battles were fought in Pittsburgh. However, the arsenal established in the beginning of the century played an important role in the battle between the states.  Therefore this figured in heavily during the Civil War. As a consequence the area suffered devastating losses of soldiers and civilians alike.  Captain James Lawrence was another naval hero from the War of 1812. The arsenal that he grew up around was named for him. Many residents of Lawrenceville worked at the arsenal. It became a social center with the Post commanders holding dances and receptions there.

In 1842 Charles Dickens visited the site and described it as a “pretty arsenal.”  President James Monroe, the Marquis de Lafayette, and former President John Quincy Adams all also visited the Allegheny Arsenal.  When President William Henry Harrison died in 1840, his cortege passed through Pittsburgh and the arsenal guns saluted him.

When the Civil War broke out, the arsenal ramped up production, manufacturing arms and munitions.  One-hundred and eighty-six people worked at the arsenal, 156 of them women and girls.  Cartridges and cannon balls were some of the war materials made there.  On September 17, 1862 the fateful Battle of Antietam was being fought in, what today is, Sharpsburgh.  That same day a series of three explosions shattered the windows of the homes in Lawrenceville. The arsenal had exploded and it could be heard two miles away.  The cause was never determined. It is believed that a spark ignited the explosives used in manufacturing the weapons.

Lawrenceville had just received its first fire engine only days earlier. It was pulled by hand to the site while others rushed to the disaster to attend to the victims.  Seventy-eight workers perished in the explosion, mostly young women. 54 of whom were never identified and buried in a mass grave in nearby Allegheny Cemetery.  The Allegheny Arsenal explosion was the single largest civilian disaster of the Civil War. A marker commemorating the disaster can be found at the former site.

During the 20th Century two World Wars and other conflicts moved the fighting off of American soil.  Thousands of Pittsburghers served their country in combat. There was even a heavy cruiser called the USS Pittsburgh which served in the Pacific fleet during World War II. It earned two battle stars for Iwo Jima and Okinawa.  During World War II the Pittsburgh area and its workers figured prominently in the war effort. It again become a major manufacturer, just as it had during the Civil War. Pittsburgh produced more steel for weapons, ships, and planes than all the allied countries combined. Pittsburgh earned the title “The Arsenal of Democracy.”

Pittsburghers took to heart the old adage, “if you wish for peace, prepare for war” during the Cold War.  13 of 20 Nike missile sites in Pennsylvania were situated around Pittsburgh.  These domestic missile sites were established to defend the area. They were prepared to launch anti-aircraft weapons should a fight erupt between the world’s nuclear superpowers.  The presence of so many missile sites in the region attests to how vital the manufacturing in the area was during war time.

The region contributed heavily to the country’s military might with manpower, manufacturing, and missile sites. Additionally, it produced or has been home to some distinguished soldiers.  General Matthew Ridgeway chose to settle in Fox Chapel after his noteworthy military career. He became Chief of Staff after serving bravely during World War II and the Korean War. He succeeded General Douglas MacArthur as commander of United Nations forces in Korea.  The Medal of Honor winner served at the Mellon Institute from 1955 to 1960. The Center for International Security Studies at the University of Pittsburgh is named for him.  Ridgeway lived in Pittsburgh until his death at 98 in 1993. 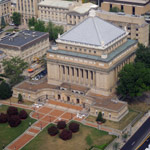 Most recently, Pittsburgh native Ret. General Michael Hayden served his country as the former director of the CIA and National Security Agency.  Hayden was from Pittsburgh’s North Side and attended North Catholic High School and Duquesne University.

Many Pittsburgh natives have served honorably in the U.S. military. Their sacrifice is remembered at Pittsburgh’s Soldiers & Sailors Memorial Hall & Museum in Oakland. It is the only military museum dedicated to honoring the men and women of all branches of service, the citizen as well as the professional soldier.  In 2010, Soldiers & Sailors celebrated its 100th birthday. It continues to honor Pittsburgh’s contributions to the service of our enduring nation.