A city’s skyline is its signature, distinguishing it from every other metropolis.  Pittsburgh’s own distinct skyline bears the mark of many who have written on the cityscape we know today.

The oldest building in Pittsburgh is the Fort Pitt Blockhouse in Point State Park. It was constructed in 1764.  The first structures built in the city were designed and built by local inhabitants. However, the oldest architecturally designed building is the Burke Building. It was designed by William Chislett and erected in 1836 at 209 Fourth Street.  It was a three-story Greek-revival building for attorneys Andrew & Robert Burke.  In 1845, Pittsburgh suffered a tragic fire that reportedly destroyed a quarter of the city. The Burke Building escaped the flames.  The Dollar Bank Heritage Center opened in April of 1871 at 340 Fourth Avenue. The building has a pair of impressive, life-sized lions flanking the entry of its baroque brownstone building.  This imposing bank was designed by Hobbs & Sons.

Perhaps one of the city’s most beautiful and ornate buildings is the Union Trust Building at 501 Grant Street. Its steep mansard roof with lavish ornaments and dormers give the building the appearance of wearing a lace cap. Atop the building are two mechanical towers that were fashioned to look like chapels.  It was constructed on the site of the nineteenth century St. Paul Roman Catholic Cathedral. The Union Trust Building is listed on the National Register of Historic Places. The Flemish-Gothic edifice was erected by industrialist Henry Clay Frick in 1915.  Its designer was Frederick J. Osterling. He designed several other buildings in Pittsburgh and left an enduring mark on the city.

During the steel industries heyday the area around Fourth Avenue housed many banks and financial institutions. This made it known as Pittsburgh’s Wall Street. Osterling also designed several buildings in the financial district. This included the Arrott Building which was built in 1922. The nearby Times Building, which was home to the newspaper “the Pittsburgh Times” was also one of his designs.  The Commonwealth Trust Building is another one of his contributions to Pittsburgh’s skyline.

D. H. Burnham, another noted architect, left his stamp on the city.  Burnham was an urban planner and architect most known for being the Director of Works for the Chicago World’s Fair in 1893. In 1910 his design of the Oliver Building in Mellon Square was completed as a memorial to industrialist Henry W. Oliver. Burnham also built the Koppers Building in 1928.

There was another building designed by Burnham and built by Henry Clay Frick. The Frick Building which of course still bears his name. It was constructed in 1901 and is located on Grant Street. Today, it’s on the National Register of Historic Places.  The building originally rose 20 stories from ground level. However, at that time Pittsburgh sat on “The Hump” or what was a part of Grant’s Hill. The city undertook a project to level the hill and what had been the basement level became the entrance level.  The earth and rocks from “The Hump” were used to fill in a portion of Panther Hollow known as St. Pierre’s Ravine. This would later be where Schenley Plaza in Oakland was constructed. 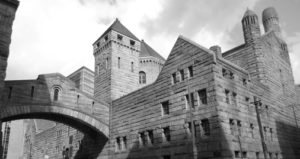 The Allegheny County Courthouse and Old Jail, on Grant Street, was designed by Boston architect H. H. Richardson. He was one of the most acclaimed American architects. Construction began in 1884 and was completed in 1888. Unfortunately, he died before his masterpiece was finished. Its architecture is characterized by Renaissance and Romanesque elements. Which included Syrian arches, Byzantine Capitals, late French Gothic dormer windows and French Renaissance roofs. The courthouse was connected to the jail by the iconic “Bridge of Sighs.” It was modeled after the one in Venice.  It is a National Historic Landmark and listed on the National Register of Historic Places.

In A case of imitation being flattery, the Granite Building at 313 Sixth Avenue, employs the same Richardson Romanesque style of H. H. Richardson’s courthouse. It was constructed from 1889-90 and was originally the home of the German National Bank. It provided banking services to Pittsburgh’s plethora of German immigrants. Pittsburgh’s Granite Building was designed by the firm of Bickel & Brennan. Charles Bickel also designed Kaufmann’s department store.

Once a vibrant train station, the stately Pennsylvanian now mostly houses luxury apartments. Union Station or Penn Station is other names its known by. It was completed in 1903 at Grant Street and Liberty Avenue. Some of its features are a huge rotunda with corner pavilions. The corners allowed turning space for carriages. 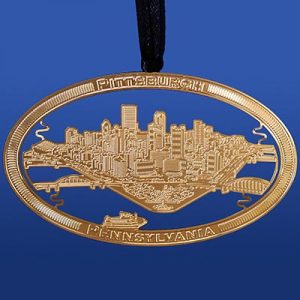 Take the Skyline home with this ornament. Click here!

Across the Monongahela River The Pittsburgh and Lake Railroad Station was constructed in 1898 by architect William Burns. It is now known as Station Square. Today the opulent passenger waiting room is now the Grand Concourse restaurant.  The surrounding structures house dining, entertainment, and shopping venues. In recent years the largest building has become home to UPMC as a teaching facility.

The Gulf Tower at 707 Grant Street was formerly known as the Gulf Building. It has served in the past as the headquarters of the Gulf Oil Corporation. Its classical lines and stepped pyramid cap look as if it came from the skyline of a Superman comic book.  Built in 1932, it reigned as the tallest building in the city until 1970. At 44 floors, it was modeled after one of the Seven Wonders of the World: The Mausoleum of Halicarnassus. Atop the distinctive pyramid is an illuminated weather beacon.  In days gone by, it used to signal changes in the weather forecast. Today, it beams various colors to celebrate holidays or show support for a group.

Also seeking its place in Pittsburgh’s night sky is the Grant Building. it was completed in 1929 at 330 Grant Street. This building also has a beacon atop it. Since its completion it has flashed out P-I-T-T-S-B-U-R-G-H in Morse Code. It is 40 floors of with an amazing art deco style.