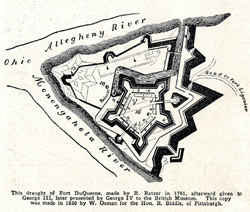 The area was mostly occupied by Native Americans and Pioneer men in forts until the late 1700s. At that time women pioneers began to move into the area as the territory expanded. This part of the New World was the frontier, and life was hard and dangerous.  The first permanent settlement was established at the confluence of the Allegheny and Monongahela Rivers in 1758, after Fort Duquesne was captured and renamed Fort Pitt by the British.  Other forts in the area were established at Bedford, Ligonier, and Redstone.

Excerpts from 1763 illustrate how precarious living in this area was at that time.  One entry details the murder of a woman and her children by Indians near Ligonier.  Another outlines the duties of women at Fort Pitt during an Indian attack: “to provide for and serve the men on duty with water” and “take care not to make the least noise in going backwards and forwards in the Fort or they will be turned out of it.” 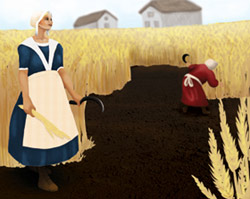 Captain Trent’s journal also shows that women who were able to wield a sickle were to turn out and cut spelt, a hardy type of grain.  The women of the fort were to hold off from ironing after washing linen when firewood supplies were low.  When it came to bathing, they were to wash at the “Batteau Shed in the Lower Town twice a week.”  This endeavor was apparently so dangerous that the women had to be escorted by armed guards.

Despite the danger, Europeans continued to settle here, and with the influx of immigrants came conflict over the land.  The settlers’ relationship with the Native Americans proved mercurial.  Sometimes the settlers traded with the Indians, and there were other times when open hostility prevailed.

During the period from 1774 to 1782, the region was repeatedly attacked by the displaced natives.  Records from the Historical Society of Pennsylvania detail some of the violence.  One young girl, who had been “shot in the Neck, and through the Mouth, and scalped,” apparently survived her wounds.  In one raid two young girls, Barbara Leininger and Marie Le Roy, were taken hostage by the Delaware and were held for four years until they escaped.  The girls sought sanctuary at Fort Pitt until they could return home to the Susquehanna Valley.  On their journey back home, they witnessed both Indian attacks and retaliations on the part of their fellow settlers.

Women of the Revolution

The Revolutionary War brought dangers of its own.  Many women followed their husbands into battle, becoming what were known as “camp followers.”  Despite the notorious connotation this term has acquired over the years, camp followers of the revolution tended to their husbands, cooking and sewing for them.  Even Martha Washington, at times, followed General Washington to the battlefield. 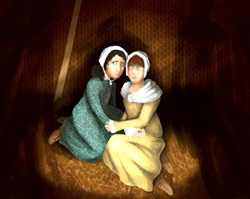 For those women who remained at home during the war, times were tough.  They had to care for farms and homes, often taking in family members displaced by the ongoing struggle for freedom.  Historical records show that many women were kidnapped and brutalized while manning the home front.

The first American census was taken in 1790, and by that time nearly 75,000 people were living in this part of the new country, most of them farming the land.  Still, existence was very difficult.  The settlers worked tirelessly merely to stay alive.  What couldn’t be transported with the immigrants had to be constructed here using natural resources.

The frontierswoman of Western Pennsylvania wore several hats.  She was at once a housewife and a farmer, doing the cooking and washing, wood chopping, spinning, and sewing, while at the same time working the land alongside her husband. 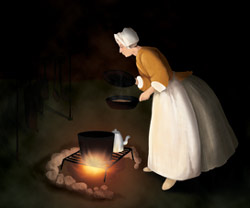 Frontier life was a dirty business.  Creating hot water was chore in itself.  It required chopping wood for a fire, laying the fire, hauling water from a spring or stream, and waiting until the water boiled.  And don’t forget, the settlers had to make their own soap too.  It’s no wonder that observers of the time described our local inhabitants as filthy!  Bathing was infrequent, a noteworthy event.

Even during times of peace, life was dangerous: diseases ran rampant and many women died in childbirth.  With their billowing skirts, women were always in danger of catching their clothing on fire.  So large was this danger of immolation that, when Benjamin Franklin was offered a patent on his safer “Franklin Stove,” the Founding Father turned it down because he wanted to make the improved stove readily available to all.

As more people flocked to our region, towns began to form.  In 1790, 11 communities were designated as towns, but by 1820 there were more than 60.  As the population grew, dirt and grime grew as well, especially when manufacturing and the use of coal took hold.  While women were not directly involved in manufacturing, a business directory from 1815 shows single and widowed women being employed (or running businesses) as laundresses, boarding housekeepers, dressmakers, and grocers.

We all have a sense of the history of women’s rights as our country matured, but the empowered women of modern-day Western Pennsylvania should not forget the earliest struggles of our region, when brutality, drudgery, disease, and danger were the comfortless reality for both men and women.  Nevertheless, the women pioneers of Pittsburgh helped lay the foundation for all that was to follow.