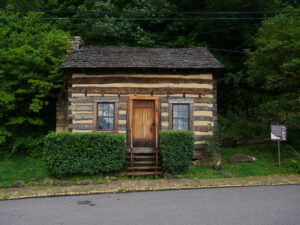 Here’s a list of log houses in the Pittsburgh area that you didn’t know you wanted until now. Most of the structures mentioned below are over 200 years old—though many of them have undergone some form of restoration. A brief history of each house is included. You may just learn something new.

The Neill Log House is the oldest existing residential structure in Pittsburgh. Like the city itself, the log house has had a bit of a spelling issue. At one time, Pittsburgh was not spelled with the “h” on the end. Likewise, the Neill Log House was spelled “Neal” until 1970, when documents showing the proper spelling were uncovered. The Robert Neal family are believed to have resided in the log house from approximately 1770 to 1795.

However, the first occupant of the home was not its namesake, but rather Ambrose Newton. A soldier at Fort Pitt, Newton was granted in what is now Schenley Park. Records show that Robert Neal bought the house and land from Newton for 34 pounds, 8 schillings. The property appreciated in value as Neal sold the house and land in 1795 to John Reed for 365 pounds, 5 schillings. Reed added more land to the estate, assuredly increasing the value even more by the time Brintnal Robins took ownership.

Changing hands once more, the Neill Log House was purchased by Col. James O’Hara. The house was handed down through the family, ultimately landing in the hands of Col. O’Hara’s granddaughter, Mary Elizabeth Schenley. (When she was 15, Mary eloped to England with 43-year-old Captain Edward Schenley.) She only visited the house once before donating the land to the city in 1889. After the Pittsburgh History & Landmarks Foundation was founded in 1964, one of their first projects was to preserve and restore the Neill Log House.

Believe it or not, we are talking about two different houses here. The Walker-Ewing-Glass house sits on Pinkerton Run Road Settler’s Cabin Park. It is believed to have been built in the 1780s by a man named John Henry. In 1785, Isaac and Gabriel Walker acquired the land and built a second cabin, the Walker-Ewing house, less than a mile down the road. The house is cared for by the Ewing family, the Pittsburgh History and Landmarks Foundation, and the Pioneers West Historical Society.

A man by the name of Alexander Gilfillan settled in Upper St. Clair in the late 1760s, where he purchased 413 acres. Around 1830, the Gilfillan family built four or five log houses for their workers. The Fulton log house is the only one to survive to present day. James and Emily Fulton purchased the property in 1923 to be used as a summer home. Their son, James Grove Fulton, served in the U.S. Congress from 1945-1971. After his death, his estate sold the house in 1972 to Upper St. Clair Township. The 1830 Log House Association was formed to preserve this glimpse into the area’s past and to use it as a teaching tool.

Originally located on Lowries Run near the mouth of the Ohio River, the Dickson log house was built approximately in 1796. It is one of the few remaining log homes north of the Ohio River. According to the Avonworth Historical Society, William Dickson purchased three plots of land in 1789. Two of the lots comprise what is now Ben Avon and Kilbuck Township; the third is in Ohio Township. After the Indian Treaty of 1795 was signed, William’s son came to the land and built two log houses there—one for himself and one for his father’s family.

The original structure was amended many times over the years. Today, the Dickson log house is located just off Route 65 in Ben Avon, close to its original location. The 16 x 20 house was discovered in 1983 when new owners took over the property. It was initially scheduled for demolition, but with cooperation of the new owner, the local community organized to save the structure, raising money and finding experts who could disassemble the decaying structure and reassemble and preserve the log house on a small strip of land that the owner did not need. This restored piece of our pioneering past serves as a reminder of how hardy our forebearers were in settling such an untamed land.[clear]

Killbuck Lodge, located in Oakdale Borough, currently houses the Boy Schout Troop 248. The structure was originally built in the 1700s on Robb farm in North Fayette township. Sometime between 1930 and 1932, the cabin was donated to the troop, dismantled, moved, and rebuilt in its current location. At that time, the lodge was dedicated to the troop and named “Killbuck Lodge” in honor of the great Delaware chief who was an influential fixture early on in the Greater Pittsburgh area. In 2015, the lodge was rebuilt with the support of the DIY Network’s Barnwood Builders.

This two-story log house was built by John McAdow around 1774, on what is now the property of the Wilson Elementary School of the West Allegheny School District. In 1801, the house was sold to David McAdams, who’s family resided there until about 1865. The house passed through several generations of McAdams before being sold to other families, and now ultimately owned by the school district. After Wilson Elementary was built and named for a past superintendent, the name was also added on to the log house. The Pittsburgh History and Landmarks Foundation lists the structure as the only existing log house in Findlay Township. The McAdow-McAdams Wilson Log House underwent a major restoration during the 1985-86 school year.

This log house was built in 1825 by John Coventry, a Revolutionary War Veteran, a famer, and a weaver. He and his family lived in the house for 50 years before it became home to the Doehre family. The cabin was handed down through the family for another three generations. Around 1975, the (Old) Moon Township Historical Society acquired the abandoned cabin. The cabin was then moved 12 miles away to Robin Hill Park and restored over an eight-year process.

The Log Cabin at the University of Pittsburgh is located on Forbes Avenue in Oakland, adjacent to the Cathedral of Learning. It serves as a landmark that symbolizes Pitt’s origins as a frontier academy of high education. The current cabin is dated around the 1820s or 1830 but was reconstructed on campus in 1987 as part of the University’s bicentennial celebrations. It is representative of the school’s original log structure at its founding in 1787. Former University Trustee Charles Fagan III donated the cabin in honor of his wife, Ann Ebbert Fagan, class of 1962.