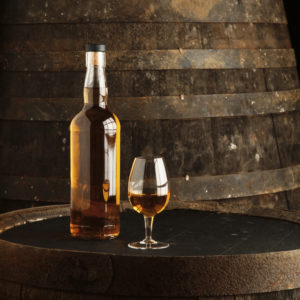 The people who settled Western Pennsylvania were a resourceful lot. They made use of everything at their disposal and wasted nothing.  Those characteristics are still present in residents here today.

The first settlers in this area faced a savage wilderness.  They feuded with the native peoples they were displacing. Their lives depended upon scratching out an existence from the untamed land.  Most of the settlers were farmers and grew grain.  After the harvest, they used their leftover grain to make whiskey.  It was not only a desired liquor, but it was also a means of currency. Farmers used whiskey to barter for services and goods.

Some of the first settlers in the area were the Walker brothers. Gabriel and Isaac Walker migrated In 1772 to Lancaster County, Pennsylvania. They purchased land near today’s Settlers Cabin Park. They farmed their land, and with the leftover grain they distilled whiskey.

The newly formed United States was deeply in debt after the war.  At the urging of Secretary of Treasury, Alexander Hamilton, President George Washington approved an extra tax on liquor to raise revenue for the new country in 1791.  At that time, Pittsburgh was the whiskey distilling capital of the country. It had more than 4,000 stills in operation.  As one local distiller noted, Pittsburgh was Kentucky before Kentucky was known as the bourbon/whiskey capital of the world.

Distillers were outraged by the tax and revolted.  Farmer-distillers in Kentucky, Maryland, Virginia, and Pennsylvania would build crude of tax collectors to burn in protest. They also engaged in disputes and launched attacks.  The distillers in Pittsburgh were particularly outraged. In the summer of 1794, nearly 400 rebels burned the Bower Hill mansion of tax collector John Neville.

Washington called up a militia of 13,000 men to quell the rebellion. The militia arrived in Western Pennsylvania in the fall of 1794. By that time the rebels had dispersed. Even so, Washington’s Army arrested 150 protesters, including the Walker brothers. They were transported to Philadelphia to face charges.  Gabriel and Isaac were released in 1795.

Two other men were convicted and sentenced to hang.  One of which was Philip Wigle.  Washington eventually pardoned them both, but The Whiskey Rebellion had already changed the country forever.  Our country’s two-party system grew out of these protests. Thomas Jefferson, a Republican, repealed the tax when elected, in opposition to the Federalists, who asserted that the Federal government had overriding jurisdiction in all matters.

Some believe that imposing taxes on the distillers in Pennsylvania caused many of them to flee to Canada and Kentucky, launching the whiskey industry there. However, whiskey was already being produced in those regions before the rebellion erupted. To appease the rebels and ensure order, Presidents Washington, and then Jefferson, offered settlers 60 acres of land in Kentucky if they moved there to grow corn. This gave birth to the bourbon trade. Bourbon is primarily corn based and aged in new, charred, white oak barrels. This is in contrast to the white whiskey distilled in Pennsylvania, which was not aged.

As the country grew, so did its thirst for whiskey.  Distilleries popped up all over the country.  Even industrialist Henry Clay Frick benefitted from the whiskey trade. In the early 1800s Frick’s grandfather, Abraham Overholt, settled a group of German immigrants in the area. It is now known as West Overton, Pennsylvania, in Westmoreland County. Overholt began to distill whiskey, which turned into a very prosperous endeavor.

Prohibition was passed just before Henry Clay Frick died in 1919. This law virtually ended whiskey trade in the area. This made him the last family member to own A. Overholt & Company. Frick’s daughter, Helen, used the considerable wealth she inherited to preserve many of the distillery buildings there.  Today, visitors can visit West Overton to learn what it was like to distill whiskey in the 1800s.

Until recently, the whiskey distilling business had remained dry in Pittsburgh.  However, several enterprising individuals have brought back our distilling history. The first whiskey distillery in Pittsburgh since Prohibition was Wigle Whiskey in 2012. It resurrected the memory of Peter Wigle. The Meyer-Grelli family opened Wigle Whiskey in the Strip District, offering rye, wheat whiskies, as well as honey rum, bitters, and gin.  Wigle Whiskey produces the white whiskey, much as its namesake did for more than 200 years ago.

Wigle has grown in a few short years from five to 30 employees and has recently opened a Barrelhouse and Whiskey Garden on Pittsburgh’s North Side.  There, visitors can tour the barrelhouse and enjoy Wigle drinks and snacks in the garden.  To commemorate the Whiskey Garden’s opening, Wigle hosted a barrel roll across the David McCullough Bridge.

Reflecting the renewed interest in whiskey, in the last decade, Fine Wine & Good Spirits has sponsored the Pittsburgh Whiskey & Fine Spirits Festival.  With the return of whiskey to Pittsburgh, perhaps in the future, the area will once again rise to prominence as a whiskey producing capital.