Guide to Banks in Pittsburgh 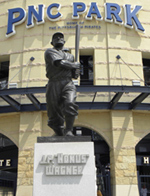 PNC Park, home of the Pittsburgh Pirates, opened in 2001. It is the fifth home of the Pirates. It combines the charm of Forbes Field with the scenic riverside location of an even earlier venue, Exposition Park.

PNC Park is heralded for its classic architecture, natural grass surface, and excellent sight lines. An intimate setting with a seating capacity of approximately 39,000. PNC is the league’s second smallest field, and it definitely brings the game to the fan. The highest seat is only 88 feet from the field. The deepest part of the park is in Left Center at 410 feet.

The shortest distance from home plate to the Allegheny River is only 456 feet. PNC Park hosted the 2006 All-Star Game. During the Homerun Derby, five different balls were hit out of the park and made a splash landing in the Allegheny River. Daryle Ward of the Houston Astros was the first player to hit a ball into the river during a regular season game on July 6, 2002. In addition to views of the river, the grandstand offers fans a stunning sight of Pittsburgh’s glittering skyline and the Roberto Clemente Bridge. 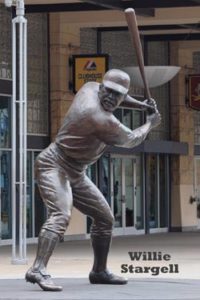 While PNC Park is a “field of dreams” for baseball enthusiasts, you don’t have to be a sports fan to enjoy the amenities of this park. Everything is state-of-the art. An interactive, one-of-a-kind tour gives fans an insight into this sports venue.

Concessions offer something to appeal to every taste. There are sandwiches from legendary Primanti Brother’s and wings from Quaker Steak and Lube. Bucaroos offers a menu that caters to children, and of course, it wouldn’t be a baseball game without peanuts and Cracker Jack. PNC’s “All You Can Eat Seats” allow fans to munch their way through the innings. Also offered are numerous beers from national brands on tap to local craft brews.

PNC Park was designed to meet the needs of its visitors. It is one of the most accommodating for disabled visitors, offering everything from drop-off zones to assisted listening devices.

Near the Right Field Gate is Kids Play Land for the children. The play area features a miniature replica PNC Park and a multi-purpose play set. Free ID bracelets that are personalized with the child’s name and seat location are offered. On select Sundays, children 14 and under have the opportunity to run the bases. Family restrooms are also situated throughout the park. 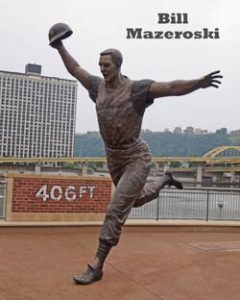 The fun isn’t limited to inside PNC Park. Each home game is a fiesta. The streets surrounding the park are filled with fans, music and children’s activities. The Roberto Clemente Bridge, which connects downtown Pittsburgh to the North Side right outside of PNC Park, is closed to vehicular traffic on game days, allowing pedestrians to walk to the park.

Statues of Pirate Hall of Famers surround PNC Park. Honus Wagner, Roberto Clemente, Willie Stargell, and Bill Mazeroski have all been immortalized. The beautifully landscaped Riverwalk along the Allegheny River connects PNC Park with Heinz Field, The Rivers Casino and Carnegie Science Center, and offers strollers a delightful view of Pittsburgh’s three rivers and the downtown area. The Riverfront Park waterfall will entice visitors to kick off their shoes and dip their toes in the cool waters.

Since the construction of PNC Park, numerous restaurants, pubs, and hotels have arisen around it. This made the surrounding area an entertainment center. Even getting to the park is fun. It is easily accessible by car, by foot or by boat. The Gateway Clipper Fleet provides a shuttle to the game. It leaves from its Station Square dock and drops off fans outside PNC Park, then shuttles them back to Station Square after the game.

Of course Pirates fan love their home park, but fans from around the country also enjoy PNC Park’s virtues. Many rival fans flock to PNC Park when their team plays the Pirates. Whether you are a Pirates fan or not, you will be a fan of PNC Park. This magnificent baseball park is worth a road trip whether you are coming from the Pittsburgh area or from across the country.