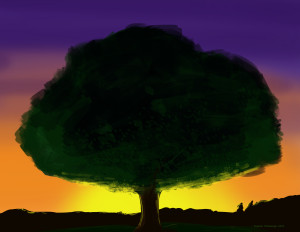 We all marvel at the giant redwood trees that dot the coastal area of Northern California, but did you know that at one time the eastern part of the nation had another colossal tree? Nicknamed the “redwood of the east,” the American chestnut grew to 100 feet or more and had trunks that often spanned 16 feet in diameter. Unlike the Cowardly Lion in the Wizard of Oz, this tree truly was the king of the forest, growing from the Deep South to Maine. The tree was everywhere. It is estimated that one out of every four hardwood trees in the Appalachian region was an American chestnut and that there were nearly 4 billion of them growing over 200 million acres in the east.

American chestnut trees were not only loved because of their great size, but they also played an integral part in the building of this country. The wood from the tree was prized because it was straight-grained, easy to work with, lightweight, and rot-resistant. The lumber was used to create everything from cradles to caskets to musical instruments to barns. It made great fence posts and railroad ties because it was so durable.

Our State North Carolina magazine reported that in 1919, North Carolina alone produced 70 million board feet of American chestnut lumber. Its bark was rich in tannins. Tannins was used by tanneries to soften the hides of animals. Additionally, settlers harvested the nuts and sold it to farmers for their livestock. It was the primary source of food for bears and other forest creatures. The chestnuts were also a food staple for humans. They were roasted and used in stuffing and bread.

In the early 1800s the trees started to decline as an ink disease killed trees in the southern apart of the country.  However, it would be the chestnut blight of the 1900s that would bring this tree toppling down. In 1904, forester Herman W. Merkel discovered a decay on the American chestnut trees at the New York Zoological Garden in the Bronx Zoo. The fungus had been accidentally imported into the U.S. on Asian chestnut trees. Those trees were resistant to the fungus but our native trees were not. The killer fungus was identified as Cryphonectria parasitica. It entered the American chestnut trees through cracks in the bark. Orange-black cankers formed on the tree’s trunk which choked off the tree’s supply of water and nutrients, killing it.

Once one tree was infected the airborne fungus spread to neighboring trees. Additionally, birds and other forest animals would come in contact with the fungus and spread it. The blight swept across the region, killing trees at a rate of 50 miles per year. To halt the devastation, a “fire break” a mile wide was cut across Pennsylvania. Unfortunately it was unsuccessful in containing the fungus. Within 50 years those majestic trees virtually disappeared. Although technically not entirely extinct, the American chestnut is extinct as a large forest tree. In 1912, the Plant Quarantine Act was passed to reduce the chance that a catastrophe of this size would ever happen again.

Even in death, the American chestnut kept on giving. The logs of the blighted trees were used to construct fences along the Blue Ridge Parkway. The coveted “wormy chestnut” lumber is derived from diseased wood that was riddled with the holes of wood-boring insects.

Today, you can see American chestnuts sprouting from the stumps of their ancestors. Their lives are often cut short as the fungus still lives in the bark of fungus-resistant trees such as the oak and ash. Most of the young chestnut trees are eventually infected and killed before ever growing to a few inches in diameter.

The Chinese and American chestnuts were crossed giving a 50 percent Chinese, 50 percent American tree, which was then back crossed with the American, resulting in a 75 percent American tree. This process was repeated until only the blight resistant properties of the Chinese variety remained in these experimental American chestnuts. Today, the Meadowview site has 30,000 American chestnuts at various stages of breeding and growth. After decades of cross-breeding and research the groups feel close to a fully resistant tree. The next hurdle is to create the natural conditions needed for the tree to thrive in the environment today.

TACF has local offices and state chapters throughout the country. With some scientific intervention and some luck, perhaps in coming years the American chestnut tree will reign as the king of the eastern forest. Pittsburgh may once again be home to these beautiful trees.