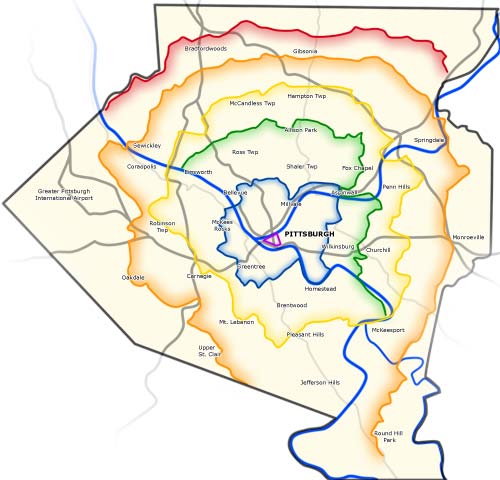 For drivers accustomed to straight east-west and north-south roads laid out like grid work, the streets in and around Pittsburgh can pose confusing navigational problems.  Due to our many streams and rivers, mountainous terrain, and numerous valleys, most of our roads are circuitous, following the natural lay of the land.  In Pittsburgh, this means the road you are on could be more crooked than a dishonest politician.

To ameliorate this situation and to address the increasing congestion on our city’s roads, in the 1940s the Allegheny County Department of Public Works began to develop a beltway system that would aid drivers in finding their way.  Using existing federal, state, and municipal roads, color-coded routes that encircled the city were created.  The signs for the belts are white rectangles with a colored circle corresponding to the name of the belt, with the color spelled out as well.  Initially, five loops were developed.  Then in 1995, a sixth belt, The Purple Belt, was added.

Based on the order of the colors in the rainbow, the outermost loop is the Red Belt.  It is followed by the ever-decreasing circuits of the Orange, Yellow, Green, Blue, and Purple Belts.  The Red and Orange Belts are not complete loops because the rest of their circumference would fall outside of the county.  The Green Belt is also incomplete, making an arc through the northern and eastern suburbs.  It comes so close to the neighboring Yellow Belt, it was not necessary to complete the southern and western portions.

The Orange Belt is the longest beltway and is nearly three times longer than the Red Belt at 92 miles.  The second of three incomplete loops, it begins in the south at Library and nearly completes the circle, falling just short, ending in Elizabeth Township.  Among the points of interest found on the Orange Belt are many of the county’s parks and the airport.

The first complete belt around the city is the Yellow Belt.  It is 76 miles long and passes through numerous municipalities and communities.  It traverses all three of Pittsburgh’s rivers, the Allegheny, Monongahela and the Ohio.

With the Green Belt, we return to an incomplete loop once again.  This semi-circle arcs through the northern and eastern suburbs.  The 39-mile belt begins in the northwestern portion of Allegheny County in Emsworth and ends in McKeesport on the Yellow Belt.  It is the only belt that has a terminus on another belt.  Travelers along this belt will find a contrast in the communities it visits.  The swanky suburb of Fox Chapel, home to many of the area’s wealthiest individuals, differs greatly from the older industrial towns of the Mon Valley such as Duquesne and McKeesport.  Along its course, attractions such as Kennywood Park and the Pittsburgh Zoo are found.

The Blue Belt flirts with the city, dipping in and out of the suburbs and into the Pittsburgh’s city limits in several locations.  It is a 38-mile circle and visits numerous city neighborhoods and suburban enclaves.  Like the Yellow Belt, the Blue Belt also crosses the city’s three rivers.  It crosses the Allegheny via the Highland Park Bridge, the Monongahela via the Homestead High Level Bridge and the Ohio via the McKees Rocks Bridge.

The newest belt, The Purple Belt, is also known as the Cultural Loop.  It is the only belt whose jurisdiction resides entirely in the City of Pittsburgh, and all of the streets lie within the downtown area.  The Purple Belt helps travelers to navigate the Golden Triangle easily.  It avoids one-way streets and difficult left turns.  The Purple Belt is part of the Wayfarer System, which was designed in the mid-1990s by Bob Firth of Informing Design of Pittsburgh.  This belt has different signage than all the other belts.

The Wayfarer System divides the city into five color-coded sections.  Light blue represents the North Side; green the South Side; Downtown, purple; The Strip District, greenish-brown; and East End, orange.  Destination signs are also part of the Wayfarer System.  They are found outside specific venues and the sign is the color of the area in which the location is found.

Although driving the street and highways of Pittsburgh can be tricky, the belts of Pittsburgh are an indispensable accessory that helps to make navigating in the area easier, not to mention more colorful!