Rehabilitation Services in the Pittsburgh Area 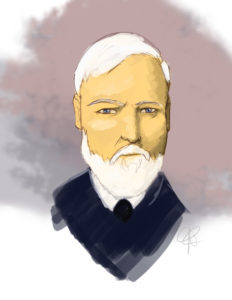 Andrew Carnegie is a name well known around the Pittsburgh area and beyond. But do many know the past in this distinguished man’s life. His story is a fascinating one of rags to unfathomable riches.

Andrew Carnegie was born in Dunfermline, Scotland on November 25, 1835. Dunfermline was well-known for two things. Abbey Church and the country’s linen industry. However, Carnegie’s entire family was banned from the church and its surrounding 60-acre park. This was due to his father’s and maternal grandfather’s radical political views against the monarchy. His father, William, was a skilled linen weaver. He wove the family’s clothes in the family’s small cottage. With the onset of the Industrial Revolution, hand weaving gradually became obsolete.
William lost his livelihood. Carnegie’s mother, Margaret, was very concerned with status and wealth. To make ends meet she opened a small grocery shop in their cottage and mended shoes. By 1848, many in their town were starving. In his writings, Carnegie detailed how he had to watch his father beg for work. He vowed that when he grew up, he would make sure that he would never have to do that.

In 1848 the family could no longer make a living in Scotland. They borrowed money and immigrated to the United States. Andrew was 12 at the time and his younger brother was just 4. They rented two rooms from his mother’s sister in Slabtown on Rebecca Street in Allegheny City. They escaped the poverty and squalor of Scotland only to find the same in Pittsburgh. Luckily, there were at least jobs here in America.
Andrew had only five years of schooling. He went to work, at the age of 13, stoking boilers in a textile factory. His days were 12 hours long and the job often gave him nightmares. He soon left the mill and went to work as a messenger boy in a telegraph office. This position gave him the opportunity to meet businessmen from all over the city. Carnegie made it a point to commit their names and faces to memory. He would then always greet them by name on the streets to make an impression.

One of those men was Thomas A. Scott. Thomas was the superintendent of the Pennsylvania railroad’s Western division. The Pennsylvania was the most prominent railroad in the country. At 18, Carnegie began to work there with Thomas as his supervisor. With Scott as his mentor, Carnegie worked to streamline the railroads and minimize costs. Together the two men invested in bringing new sleeping cars to trains. Carnegie saw his investment earn a profit of $5,000 a year.
Additionally, Carnegie realized that iron bridges would likely soon replace the old wooden ones. He formed an iron company to start making them for the railroads. This investment soon made him, Scott, and J. Edgar Thomson wealthy. Thomson was president of the railroad and had invested in Carnegie’s company using his wife’s name to avoid the perception of conflict of interest.
In 1865, Carnegie left the Pennsylvania Railroad. He and his mother moved to a posh hotel, St. Nicholas, in New York City. While there Carnegie was introduced to Herbert Spencer and his philosophies. Spencer’s had a classical liberal belief that advocated Social Darwinism, or “survival of the fittest”.

In his early 30s, Carnegie wrote of aiming to retire at 35. That all changed after a trip to England in 1872. This trip would spur him to work another 30 years. During his trip abroad, he saw English iron mills expanding into steel mills because of the invention of the Bessemer Furnace. That furnace made converting great quantities of iron into steel easier and far more profitable.
Carnegie borrowed money and opened a steel plant with Bessemer furnaces in Braddock. On August 22, 1875, the first steel was produced at what would be Carnegie’s Edgar Thomson Works. It was named for his friend and the president of the Pennsylvania Railroad. Carnegie promptly set out to corner the rail market. At a meeting of steel mill owners, Carnegie showed up and demanded an equal share of rail production. Understandably the other owners protested. Carnegie explained that he knew the other owners were making $50,000 to $80,000 a year but had enormous expense accounts. He then told them that he only made $5,000 a year and had no expense account. They couldn’t compete with him and eventually were put out of business.

The Edgar Thomson Works business was such a success that Carnegie bought the Homestead Steel Works in 1883. While there were occasional labor tensions at the Edgar Thomson Works, they had usually been settled amicably. That would not be the case at Homestead Steel Works. In 1892 a fierce Unions strike led to a gun battle, leaving at least a dozen dead. Carnegie was away in Scotland and had left his friend and business partner, Henry Clay Frick, in charge. Although he initially supported Frick, he later criticized his actions.
Ironically, during his early steel-making days, Carnegie wrote several essays championing union rights, and settled several labor disputes at various plants. While he may have been, or perceived himself to be, a friend of labor, Frick clearly was not.

Carnegie was also associated with another fiasco, the Johnstown Flood. He was a member of the South Fork Fishing & Hunting Club. Sixty-one of Pittsburgh’s leading industrialists had purchased the Western Reservoir, later known as Lake Conemaugh. It provided water for the Pennsylvania Canal that ran between Pittsburgh and Johnstown. Before the group bought the property the dam there had been neglected. Additionally, previous owners had removed its drainage pipes. Nevertheless, the group purchased the lake and its surrounding area as a refuge from the dirty, crowded city of Pittsburgh. Like their predecessors they too neglected to properly care for the dam. They failed to reinstall the drainage pipes and made modifications to the dam that would have dire consequences.
An enormous storm blew through the area on May 31, 1889. This caused the dam to burst, sending water downstream to Johnstown. This flooding killed 2,209 people in its wake. The people of Johnstown aptly blame the business of Pittsburgh and felt that they got away with murder.

An End or Beginning

Carnegie rebounded from these setbacks and by 1900 was producing more steel than the entire steel industry of Great Britain. However, that year he faced a new challenge when customers stopped buying Carnegie’s steel because of J.P. Morgan. Morgan had begun to purchase finishing plants that fashioned steel into rods, nails, etc. In addition, he opened his own steel production plants.
Carnegie’s plants were more efficient and cost effective, so Carnegie knew he could crush Morgan if he chose to. Morgan also knew this, leaving him only one option. He would need to buy out Carnegie Steel. Carnegie was 65 when Morgan made his move. For whatever reason, Carnegie accepted Morgan’s offer of $480 million, a sum that many felt was way below the company’s true value.

Earlier in his life Carnegie had written that a man should spend the first third of his life acquiring an education, the second third acquiring wealth, and the last third giving it away. Carnegie remained true to his belief and became the most generous donor in the nation’s history. It is estimated that he gave 90 percent, $350 million, of his wealth away.
He established nearly 3,000 libraries. Two-thirds of those were in the U.S. He founded Carnegie Technical Schools, which evolved into today’s Carnegie Mellon University. His Carnegie Hero Fund honors those who have risked their lives to rescue others. He also started the Carnegie Foundation for the Advancement of Teaching; Carnegie Relief Fund; which aided injured steelworkers; Carnegie Corporation, a grant-making organization, which among its many accomplishments has been the development of Sesame Street; Carnegie Dunfermline Trust; and Carnegie Trust for the Universities of Scotland. Although not a religious man, he purchased 7,500 organs for churches. In Pittsburgh, he funded the Carnegie Museum and Carnegie Music Hall.

In October 1886 Carnegie’s younger brother, Tom, and his mother passed away. At the time Andrew himself was sick with typhoid. Later that year, at the age of 51, he wed 30-year-old Louise Whitfield. They had one daughter, named for his mother Margaret, on March 30, 1897. He purchased Skibo Castle in the Scottish Highlands. He would live in Scotland for many years to follow.
Carnegie was also interested in world politics. He urged the formation of the “league of nations” and endeavored to bring together Theodore Roosevelt and Kaiser Wilhelm, who were creating tension in Europe. Carnegie was able to convince the two to meet. However, the peace talk failed, and World War I erupted.
In 1914, with war on the horizon, Carnegie left Scotland for America. In 1916, the Carnegie family moved into Shadow Brook, a 100-room mansion in Massachusetts, and lived there for several more years. Four months after giving his daughter away in marriage to Roswell Miller, Jr., Carnegie died from pneumonia on August 11, 1919, at the age of 84.

While he was on his deathbed, he sought to reconcile with Frick and dispatched a message to him, inviting him to come to his house. Frick sent back a note, “Tell Mr. Carnegie I’ll meet him in hell where we are both going.” Frick died four months later of a heart attack at the age of 69. Carnegie was buried in Sleepy Hollow Cemetery in Sleepy Hollow, New York.
In 1920 his autobiography was published. In it he credited Col. James Anderson who had opened his library to the working class. “Colonel James Anderson, I bless his name as I write, announced that he would open his library of four hundred volumes to boys, so that any young man could take out, each Saturday afternoon, a book which could be exchanged for another on the succeeding Saturday.”

Andrew Carnegie is a great example of how hard work and determination can lead to a great life. The path had ups and downs with twists and turns. At times he was a ruthless businessman and others a charitable savior. Therefore, he was a human being just like the rest of us. Trying everyday to be the best version of himself. Sometimes failing but always trying to do better.