George C Marshall Jr is known for many things: he was an American army officer, a statesman, and a Nobel Peace Prize winner. He was integral in the economic reconstruction on Europe post-WWII and was distinguished enough to share a table with the Queen. And he hails from Western Pennsylvania. 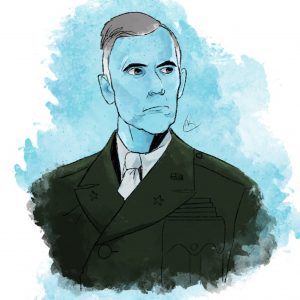 In 1902, Marshall married Lily Cater Coles, only to ship out to serve in the Philippine-American War a few days later. Over the next decade or so, Marshall received various postings in the United States and the Philippines. While state-side he continued his military education and rose through the ranks.

By the time the U.S. entered World War I in 1917, Marshall was assigned as assistant chief of staff for operations of the 1st Division. His roles in the planning of both training and operations earned him much recognition while stationed in France. He is credited with the first notable American Victory of the war for his planning of the Battle of Cantigny. He also made an impression on General John Pershing, commander of the American Expeditionary Force (AEF). Rather than silently accepting criticism of the division, Marshall stood up to the General, advocating for the division’s accomplishments despite the obstacles they faced. Marshall’s bold action impressed Pershing; he quickly become a trusted adviser to the General. In mid-1918, Pershing brought Marshall onto his staff.

Between World War I and World War II, Marshall took on many roles—and succeeded in modernizing military processes and education. Marshall served as aide to Gen. Pershing, taught at the Army War College, and served as executive officer of the 15th Infantry Regiment in China. In 1927, as a lieutenant colonel, he received an appointment as assistant commandant of the Infantry School. The changes he initiated from this position proved to be beneficial during WW II.

That same year, Elizabeth Carter Coles, his wife of 25 years, passed away. Elizabeth, who went by “Lily”, died of heart failure due to the strain of thyroid surgery. In 1930, Marshall married his second wife, Katherine Tupper, with Gen. Pershing as his best man.

The next several years sent Marshall to various stations around the country. In 1938, he repeated history by voicing his dissent of a proposed military plan to President Franklin D. Roosevelt. Once more, Marshall’s candor proved to be rewarding; Roosevelt nominated Marshall for the role of the Army Chief of Staff. Marshall received a promotion to General and was sworn in as chief of staff on September 1, 1939. That same day, Germany invaded Poland, starting the second world war.

Marshall figured largely in turning the U.S. military into a powerhouse that enabled the Allies to win the war. He organized the largest military expansion in the country’s history. He needed to turn an army of drafted civilians into a force of over eight million. Marshall used his experience of teaching and developing modern warfare techniques, as well as his skills in military organization and his talent for inspiring others. Marshall recommended many of the American generals who received top commands in the war. The list includes Dwight D Eisenhower and Lesley J McNair.

However, that is not to say that Marshall never experienced failure. In 1943, he was feeling pressure from government and business leaders to adjust his troop replacement system in order to preserve manpower for industry and agriculture. Thus, we switched from a 265-division army with a system of unit rotation, to a 90-division army with an individual replacement system. The results exacerbated problems with unit cohesion and effective transfer of combat experience to new soldiers.

At the same time, Marshall was instrumental in preparing the U.S. Army and Air Forces for the European invasion. He drafted the Allies central strategy for the European operations and worked closely with Winston Churchill. Though the two likely had disagreements, Churchill characterized Marshall as the organizer of Allied victory. In December 1944, Marshall became the first American Army general to receive a promotion to five-star rank. He also took on the newly created title of General of the Army. In November 1945. Marshall left his position as chief of staff. Dwight Eisenhower was appointed as his successor.

In 1947, President Truman appointed Marshall as Secretary of State. His became the spokesperson for the State Department’s efforts to reconstruct a war-ravaged Europe. At the insistence of the President, the (formally named) European Recovery Program, was instead call the Marshall Plan. Enacted in 1948, the Marshall Plan was a four-year plan which provided funding to help finance the reconstruction of the bombed-out cities, industries, and infrastructure. The program was remarkably successful and resulted in a rapid economic recovery in Europe.

Marshall is also known for his opposition to the state of Israel while Secretary of State. He believed that recognizing the Jewish state would result in a war in the Middle East. Truman repeatedly rejected Marshall’s advise on the matter.

Marshall retired from this position in 1949 due to ill health. However, the following year, Truman called on Marshall to the position of Secretary of Defense. Truman needed Marshall to restore confidence and morale to the department after a poorly prepared start in the Korean War.

After one year as Secretary of Defense, Marshall finally entered full retirement. Rather, as fully retired as a General of the Army is allowed to be given regulations which stipulate Generals of the Army remain on active duty for life. He withdrew from public life as much as he could. He spent much of his time gardening with his wife. George grew vegetables and Katherine tended to her roses. Considering the 49 continuous years of public service, Marshall certainly earned as much rest and relaxation as he could get.

But a man like Marshall could never truly stay away for long. In 1953, President Eisenhower appointed Marshall to the head of the American delegation to the coronation of Queen Elizabeth II. As he walked the aisle of Westminster Abbey for the coronation, Marshall was surprised as the audience rose to its feet as a gesture of respect. He was likewise honored with being the only non-royal seated at the Queens table for the post-ceremony banquet.

General Marshall died on October 16, 1959. He had stipulated that he wanted a simple military funeral and burial. He was buried in Arlington National Cemetery with his first wife. His second wife was also buried there upon her death in 1978.

In 2002, Uniontown honored its distinguished son with a bronze statue of the General, which is in George C. Marshall Memorial Plaza. It was formally dedicated Oct. 26, 2003, by Prince Andrew of the United Kingdom.