The Siege of Fort Pitt

What’s in a Name – Washington County 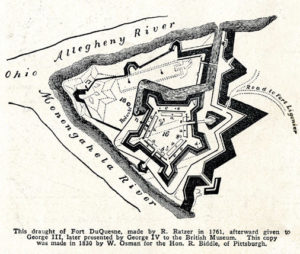 Land has always been valuable and the source of much conflict amongst people, and the confluence of the Allegheny and Monongahela Rivers made this area, and what would later become Pittsburgh, choice real estate and the site of much violence.
Initially in the 1740s, when English trader, William Trent, first came to the area and set up a trading post at the headwaters of the Ohio River to trade furs with the Native Americans, everyone got along swimmingly. However, things changed when the French came to the region in 1754. They captured Trent’s trading post–several other British settlements in the area–and began to construct Fort Duquesne.

The British were not happy to have been pushed off the land. The result is what many in North America call the French and Indian War. However, it is known as the Seven Years’ War elsewhere. The British outnumbered French inhabitants of the New World by approximately 2 million to 60,000. As a result the French recruited the Natives, often referred to as “Indians”, to battle the British with them. And so, the first name came to be known.

However, this war is also considered a part of the ongoing battle between France and Britain, which took place on five continents and drew in many other countries. While France, Britain, and Spain battled for dominance in the New World, Prussia faced off against Austria, France, Russia, and Sweden in a fight for European dominance. Many historians believe this to be the first true world war.

The French Leave in a Blaze of Infamy

Eventually, the French would lose Fort Duquesne to the British. Before departing the area in 1758, the French burned the fort to the ground. The 400 British troops living there were forced to shelter that winter in Mercer’s Fort, a small embattlement that was constructed on the banks of the Monongahela River, until the larger Fort Pitt could be constructed. The new fort and the city itself were named for William Pitt The Elder, the first Earl of Chatham. The French and Indian war technically ended in 1760, but hostilities wouldn’t cease for the Europeans until 1763.

Europeans pushed Indigenous tribes further off their own land as more settlers came to the area. This enraged the Native Americans. The resulting violence became known as ‘Pontiac’s War’. Pontiac had once sided with the French and now channeled his ire on behalf of Native Americans. Other tribes rallied around the Ottawa chief to express their dissatisfaction with the behavior of the British. He first struck Fort Detroit in May of 1763; the fort proved impenetrable, so he laid siege to it. While the British troops were trapped in the fort, Pontiac’s men went through the area killing everyone except for the French settlers.
Other tribes joined Pontiac and during May and June of 1763, Pontiac attacked and burned eight more British forts. The ninth fort, Fort Edward August, in what would later become Green Bay, Wisconsin, became abandoned after a battle left many of the soldiers dead. Survivors burned at the stake. Pontiac also ravaged settlers on his expedition throughout the territory.

And Then There Were 10

The British back in England paid little attention to the skirmishes taking place in the colonies. But that all changed with The Siege of Fort Pitt. On May 29, 1763, 500 Native Americans attacked Fort Pitt. However, the soldiers defended the fort successfully. The Natives could do nothing but rampage across the area killing in Western Pennsylvania, Western Maryland and Virginia while keeping the soldiers holed up in the fort. Fortunately, for the British in Fort Pitt, a message was sent to Fort Ligonier before the natives attacked for the third time.

A Bouquet Is Sent

The British decided to engage upon hearing that Fort Pitt was under siege. Colonel Henry Bouquet led an expedition through hostile territory from Carlisle, Pennsylvania, to Fort Pitt. He and his troops traveled the Forbes Road to Ligonier arriving on August 2. After regrouping, Bouquet and his men left Ligonier on August 4. Bushy Run Station was their first intended stop. This area had a water supply and meadows where their livestock could forage.

All’s Fair in Love and War

Throughout the summer, conditions in Fort Pitt continued to decline. As the Natives wreaked havoc in the area, settlers fled to the safety of Fort Pitt. The number of people inside swelled to 1,500, which was well over its usual capacity. Food was running low and smallpox was running rampant. On two occasions the Native Americans offered safe passage to the inhabitants if they would surrender the fort. The commander of the fort, Captain Simeon Ecuyer, didn’t trust them, and during one negotiation, Ecuyer offered the Natives blankets from the smallpox infirmary, with the hope that they would take the blankets and fall ill. However, the germ warfare did not work.

With the knowledge that Bouquet was on his way to the fort, the Natives doubled down and made attempts to breach the walls of the fort. However, Ecuyer’s men launched grenades and boiling liquids on them to repel the attack. This continued for five days until August 1 when things suddenly became eerily quiet.
Patrols ventured out of the fort to discover the Natives were gone. It was believed that they had left to ambush Colonel Bouquet at Bushy Run. Those inside the fort could only hope that Bouquet would repel the attacks, otherwise their futures looked quite bleak.

The Native Americans ambushed Bouquet and his troops in a gully between two hills at Bushy Run. Bouquet’s men were instructed to head into the woods after the Natives. After battling for two days, Bouquet and his troops proclaimed victory, although 50 men had been killed and 60 wounded. After regrouping, Bouquet set out to finish his mission of liberating Fort Pitt.
Fortunately, for Bouquet and his troops, they met no resistance along the way and arrived at Fort Pitt on August 10. They found it still standing and the Union Jack still flying.

Bushy Run effectively ended Pontiac’s War. As the Natives in the area were vastly outnumbered by the Europeans, they could no longer afford to suffer casualties. The Siege of Fort Pitt would be the last attack on the fort. The British decommissioned the fort in 1772.