The Grant Building’s Presence in Pittsburgh 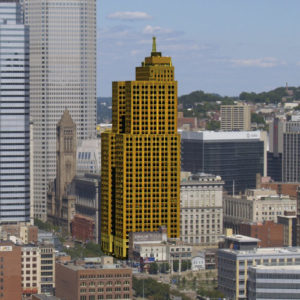 We often show off our city’s skyline to visitors from atop Grandview Avenue. Make sure to point out that the lights on top of the Grant Building flash out the word P-I-T-T-S-B-U-R-G-H in Morse code. While the Morse code fact is attention getting, there is a lot more to be said about this skyscraper.

In the late 1920s and early 1930s, the Pittsburgh skyline experienced a dramatic change. During those years, the Koppers, Gulf, and Grant Buildings were built. This drastically changed the city’s skyline. Architects Henry Hornbostel and Eric Fisher Wood’s 485-foot-tall Grant Building became the tallest building in Pittsburgh in 1929. It kept that title until the Gulf Buildings was finished in 1932.

The Gulf and Koppers buildings served as corporate headquarters, while the Grant Building was constructed to be a modern office building. The Grant building was named for James Grant, a British soldier, who led and lost a battle to defeat the French at Fort Duquesne on September 14, 1758. The French solider given credit for Grant’s defeat (and Braddock’s) was Francois-Marie Le Marchand de Lignery, and he remains mostly forgotten. The building provided office space to the city’s growing professional residents. To many it appeared that the Pittsburgh skyline would continue to change. However, the Great Depression and WWII brought construction of additional skyscrapers to a halt. Things wouldn’t change much until the 1950s.

The Grant Building tenants that occupied this structure in the early days appreciated the amenities it offered. They say location is everything, and the Grant Building certainly had that. Located by the Court House and the City County Building, it provided convenient office space for the lawyers and other professionals who had to visit those public buildings on a regular basis. A walking tunnel from one of the Grant Building’s five sub-basements allowed tenants to get to appointments without dealing with inclement weather or soot-filled air. Possibly the most appreciated feature was that every floor of this 40-story office building was equipped with a shower. This proved to be a major perk for the professionals living and working in the dirty Pittsburgh of 1929.

Three years were devoted to the construction of this massive U-shaped structure. Terra-cotta ornamentation was a key feature of this Beaux-Arts architectural design. Swedish and Belgian granite wraps the Grant Building’s lower floors while limestone, buff brick, and cast stone were used above.

Shortly after completion, the Grant Building’s third floor became the home of the pioneer radio station KDKA. It was America’s first station to broadcast regularly scheduled radio programs. The red neon lights flashing the word P-I-T-T-S-B-U-R-G-H in Morse code could be seen as far as 75 miles away. Some spotters reporting the beacon visible at 150 miles away-on those few very clear evenings.

During the Grant Building’s infancy, one could ascend to the 37th floor observatory. Once there you could take in an astonishing view of the city and its hills, rivers, and skyscrapers.

The city of Pittsburgh and the Grant Building have seen many changes since 1929. The building has undergone updates, and its design may now be best described as post-modern. Pittsburgh has moved from being a very dirty place to being one of the most improved cities in the world. With the improvement of the city’s air quality, the subterranean connecting tunnels have been abandoned and the showers that were once on every floor are no longer remembered even by the oldest tenants of the building.

The Grant building still provides modern office space to the city’s growing professional residents. The Morse code message still beams out P-I-T-T-S-B-U-R-G-H for everyone to see. This makes it easy to see why buildings like this remain a part of our skyline.