10 Common Trees Found in Our Neck of The Woods

Since Pittsburgh is located in Pennsylvania, which means "Penn's woods," you know the region must have many trees. Sometimes you don't really appreciate how thickly forested the area is until you travel to another part of the country. In Cheyenne, Wyoming, where the trees are few and far between, they have a T-shirt showing of "The Wyoming State Tree." It's a photo of a telephone pole!

According to the Pennsylvania Department of Conservation and Natural Resources, there are 134 native and 62 introduced species of trees found in the state. Living here, you see trees everyday, but when was the last time you really looked at the ones surrounding you? Have you wondered what kind they are?

Trees are primarily identified by three things: their leaves, seeds, and bark. Below are some of the trees you will find in our neck of the woods. 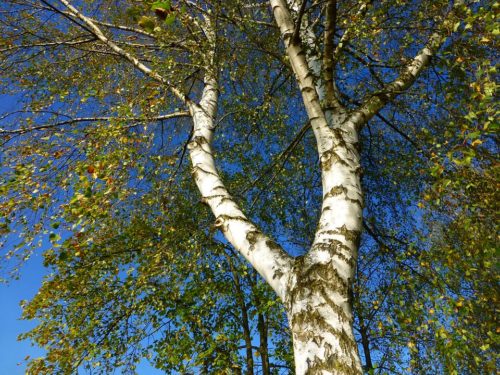 There are several types of birch trees found in the area, but the easiest to identify is the white birch because of its bright white bark. Unfortunately, these striking trees do not live very long because they are susceptible to insects. They look especially beautiful against a clear blue sky. 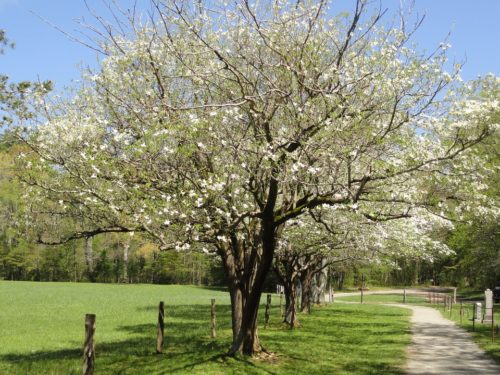 The flowering dogwood is probably one of the prettiest trees you will find in the area. In the spring, it blooms with either white or pink bracts, and in the autumn, the leaves turn a bright red. A native tree, these are often planted seasonally as well. They are smaller in stature and their profiles are aesthetically pleasing in the landscape. 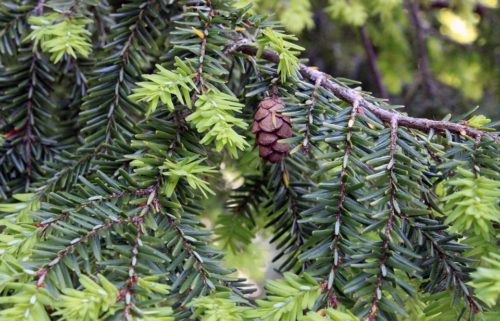 In 1931, Pennsylvania named the hemlock as the state tree. These trees are slow-growing and long-lived. It takes a hemlock 250 to 300 years to reach maturity, and it can live up to 800 years. Additionally, this evergreen tree was used by settlers in the region to build log cabins. 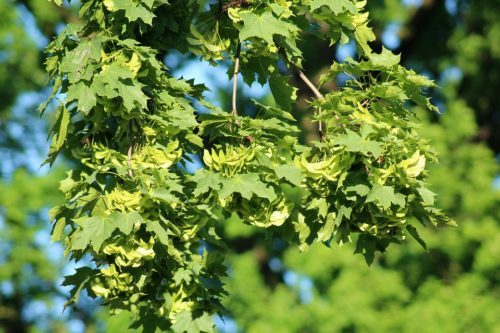 Maples in the area come in several different types, but the red maple is the most common tree in the state. The leaf of the maple tree is most likely the easiest to identify as it is found on the Canadian national flag and on the uniforms of the Toronto Maple Leafs. In the spring, maples shed their winged seeds that many people refer to as "helicopters," but the technical name for them is samaras. In autumn, maples turn a bright scarlet or brilliant orange. 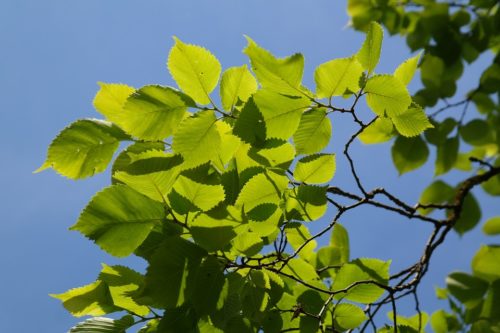 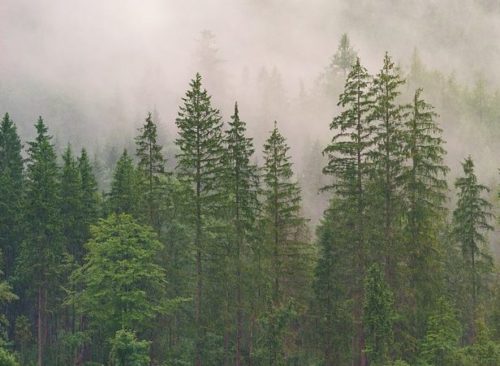 There are numerous species of pine trees in the area from white pines to pitch pines. In addition, there are numerous varieties of spruce and firs here as well. It is often hard to tell them apart, but generally, pines have needles in clusters while spruce needles are usually short and pointed. The needles are square in shape and easily rolled between he fingers. Firs, on the other hand, have soft, flat needles that are difficult to roll between the fingers. 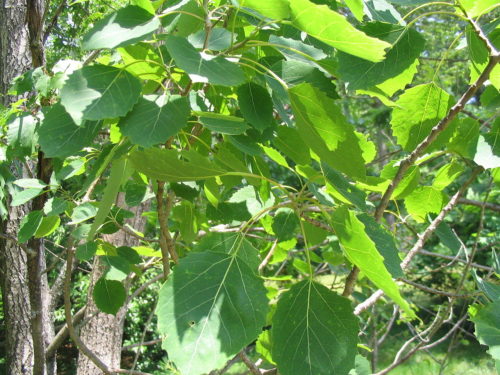 Poplars grow to be some of the largest of the eastern hardwood trees. In pioneer times, their trunks were hollowed out for use as canoes. The lobed leaves turn yellow in fall. Poplar wood is often used in musical instruments. 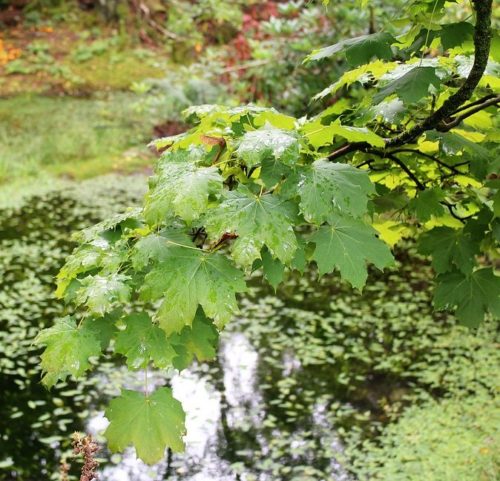 Sycamore trees are identified by their fan-shaped leaves and their round ball-like seed pods. These trees can grow very tall, up to 125 feet. Sycamores have smooth, whitish bark, which often peels off in large sheets. The leaves turn brown in the fall. 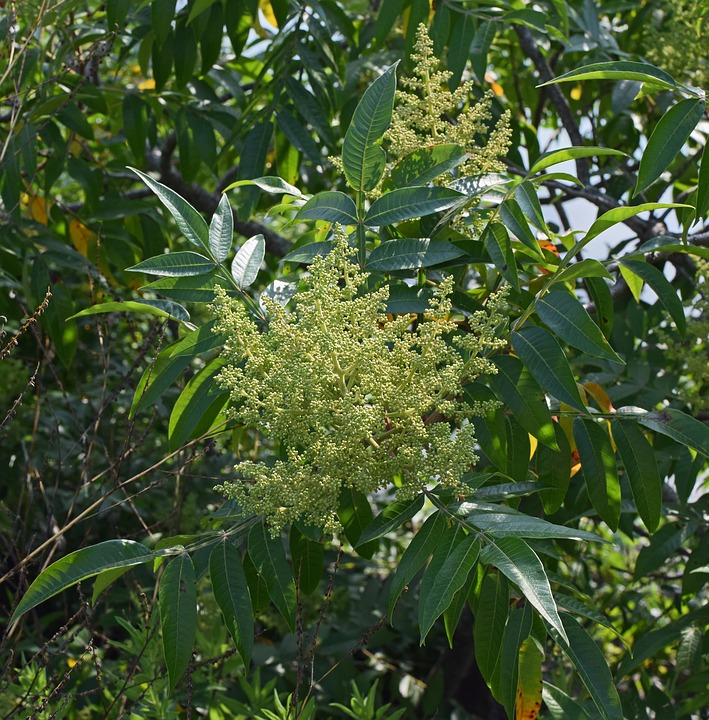 You may know this tree as a sumac tree. This species of tree was introduced in 1784 by an amateur gardener in Philadelphian and unfortunately, it has migrated to our region and beyond. It is an invasive tree that grows rapidly and produces chemicals in its roots that also prevent other plants from growing near it. It also gives off a foul odor, and its extensive root system has been known to damage sewer lines and building foundations. 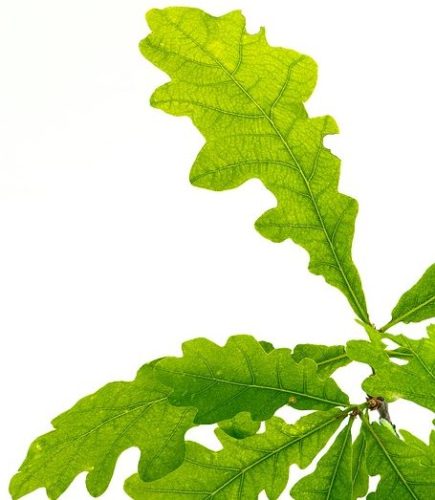 The Pittsburgh area is home to several different types of oak trees. Next to the maple, the oak leaf is probably the most easily identified, but it is this tree's fruit that seems to be ubiquitous. The acorn is a food source for many woodland mammals. Depending on the species, oaks can turn yellow, red, or brownish in autumn. White oaks can live 400 or more years, and its wood is prized for hardwood flooring and for whiskey barrels.