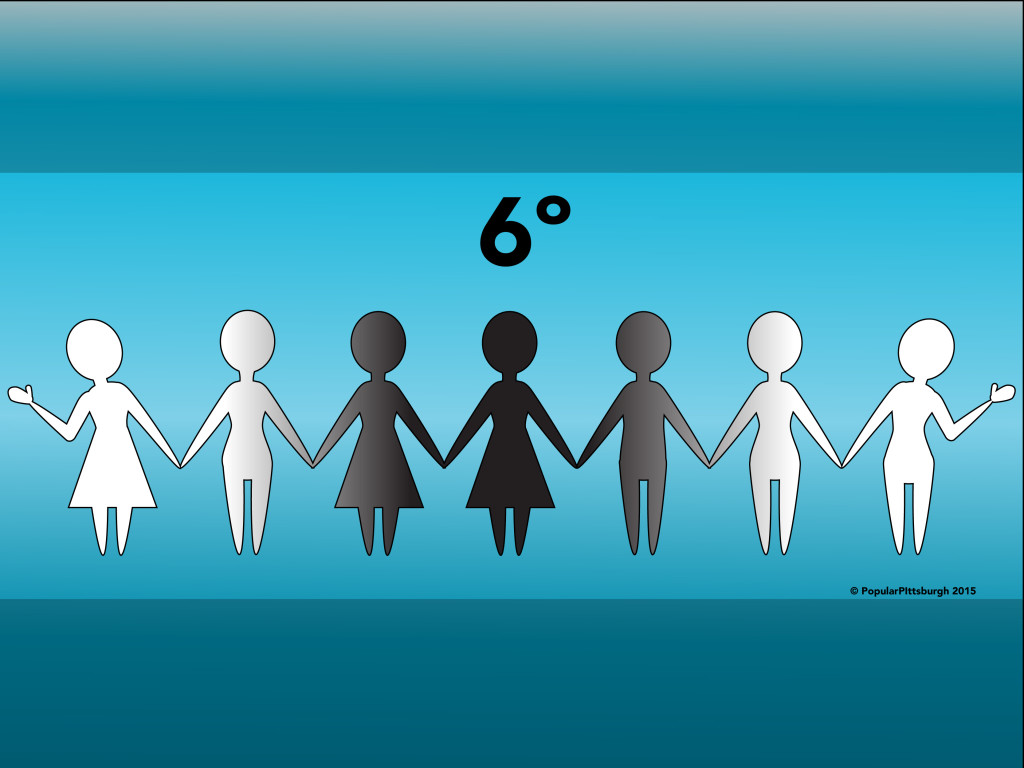 Most have heard of “Six Degrees of Kevin Bacon”. For those who haven’t it’s a game to connect any actor with a movie Kevin Bacon was in with 6 connections or less. It originates from a game referenced as “six degrees of separation” which poses that any two people on Earth can be connected by six or fewer friends or acquaintances. That’s sure to be the case in Pittsburgh.

It could be because we are in the top 50 cities of homeowners who have been in one house for over 30 years. In fact, as of late 2020 around 33% of homeowners moved in before 1990. It’s also certainly true that a large number of those born in Pittsburgh remain here their entire lives.

Pennsylvanians’, and specifically Pittsburghers’ lay down roots in the area. Therefore, it can be easy to connect a new friend with your cousin’s boyfriend’s mother. Or a wide range of other connections. I can’t tell you how many times I meet some one and find out they know me from a friend of a friend.

These deep rooted connections has given rise to a game my family and I enjoy playing that I call “Six Degrees of Pittsburgh.” In my version I try to connect new acquaintances to someone my family already knows in Pittsburgh. More often than not, I discover that we share a mutual friend or acquaintance. “You’ve Got A Friend in Pennsylvania” was on our old license plates for a good reason.

I must not be the only one playing this game. A few transplants have commented that they had been a little put off by Pittsburghers’ “nebbiness.” They feel as if they’re being interrogated when we ask where they’re from, where they work, where they go to church, and where they live. Understand, we aren’t being “nebby”.  We’re just trying to figure out how we are already connected to you.

However, not everyone in my family enjoys playing Six Degrees of Pittsburgh. In fact, when  my daughter was a teen, she was quite annoyed by it.

As she grew and acquired her own social group, I continued to engage in the game. She came home from school her freshman year of high school and asked if we could take her new friend to the football game.  The last name sounded familiar so I began searching my memory for others with it.

“I wonder if she’s related to Dirtbag that went to school with your uncle?” I asked.

My daughter glared at me. “Don’t you dare ask her if she’s related to someone named ‘Dirtball.’ “

“Dirtbag,” I corrected her.

I respected my daughter’s wishes when we picked up her friend. I refrained from questioning her, but only because I couldn’t find a tactful way to phrase the question, “Is your father Dirtbag?”

A few weeks after that, as I drove a car filled with teenage girls home from a dance, I reveled in the chance to play my game with a whole new gaggle of girls. I discovered that one girl’s family owned the corner bar near the neighborhood where I grew up. Another’s second cousin and I went to school together. We all laughed when I told how, in fourth grade at St. Athanasius, that cousin won the privilege of naming a baby we adopted through the Holy Childhood fund and chose Wolfgang Sean.

However when we arrived home I discovered the only one who wasn’t laughing was my daughter.

“Do what?” I asked innocently.

“You know what. Interrogate my friends.”

“I’m only trying to be friendly,” I replied, and to change the subject, I asked if she danced with anyone.

“Yeah,” she said, and I eventually pried an identity out of her.

“That name sounds familiar,” I mused, rubbing my chin.

She groaned and walked away, knowing I was well on my way to playing Six Degrees of Pittsburgh. The name tumbled through my head like a lottery ball until one stood out. I called my sister for verification. “I think I worked with his father,” she said. “Nice guy, an accountant with a colossal comb-over.” I got off the phone and called up the stairs to my daughter. “Your aunt thinks she worked with the father of that boy you danced with. Do you know if his dad is an accountant?”

My daughter opened her bedroom door and sighed letting me know I was right, “Can’t I know someone on my own?”

I smiled, satisfied and walked away mumbling to myself. “Not in Pittsburgh, sweetheart.”