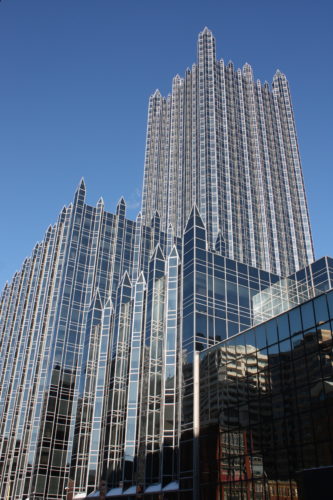 While the design harkens back to other historic structures, the buildings at PPG Place are like no others in the world. The six-building complex combines Gothic architecture with modern materials and the urban skyscraper with a fairytale castle.

PPG, founded as Pittsburgh Plate Glass Company in 1883 by Capt. John B. Ford and John Pitcairn, opened the nation’s first successful plate glass factory in the United States in Creighton, Pennsylvania. Its first corporate headquarters was located on Fourth Avenue in Downtown Pittsburgh. During its more than 135 years of existence, PPG has grown, prospered, and expanded across the world.

They broke ground for the new head quarters complex on January 28, 1981.  Architects Philip Johnson and John Burgee designed the buildings. It encompassed 5.5 acres, a three-city block area in downtown Pittsburgh not far from their first office. Prior to construction, they built an 8-foot-tall, 600-pound model. It was assembled in the basement of Renato Chieruzzi’s home in Tarentum. The glass for the model was made at PPG’s Ford City plant.

Construction of PPG Place did not go as expected. The new building site had, 200 years before, been located 1,600 feet from the outskirts of Fort Pitt and was originally the King’s Garden and King’s Orchard. Construction workers unearthed more than 10,000 artifacts from Pittsburgh’s pre-Revolutionary War era. While construction took place during the day, anthropologists from the University of Pittsburgh sorted through the remains of glassware, leather goods, and medical materials found in the dirt and rubble.

The offices opened for occupancy in August 1983. The next year, on April 11, PPG held a dedication ceremony. PPG Place encompasses One PPG Place, a 635-foot, 40-story central tower; four six-story buildings; and one 14-story story building surrounding a one-acre European-style plaza. One of the most noted features is the glass-enclosed Winter Garden. London’s Victoria Tower, the Allegheny County Courthouse, and the Cathedral of Learning were the inspirations behind the castle-like design of the complex. The complex has 231 spires and was constructed of more than 1 million square feet of PPG Solarban 550 clear reflective glass. PPG Spandrelite Glass cover the lobbies and a laminated cracked glass mirror panels the elevators. The total cost of construction was $200 million.

While most thought PPG Place to be a beautiful asset to the city and a bright spot on the face of the city’s skyline when it opened, there were detractors. In a 1983 Washington Post article about PPG Place, the writer said, “To some it looks funny-ha-ha, to others funny-strange.”

But since its opening more than 35 years ago, people have come to love this glittering gothic gem in Pittsburgh’s skyline and how its mirrored glass reflects the best of our city back to us.

The plaza has become an increasingly important gathering place since PPG Place debuted. In warmer weather a water fountain burbles around a pink granite obelisk in the center of the plaza. In the winter, PPG transforms the plaza into a winter wonderland; the obelisk gets covered by a Christmas tree, and a skating rink is erected in the plaza. There’s no more magical a winter evening than skating around the gleaming castle with snowflakes and lights reflecting in the buildings’ glass. And there is no more magical, beautiful building in Pittsburgh’s skyline than PPG Place.