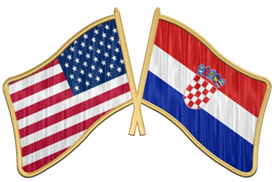 Croatia is a bit smaller than the state of West Virginia. Many Croatian immigrants settled in the Pittsburgh region. Therefore, this tiny country in southeastern Europe made a big impact in Pittsburgh. According to the U.S. Census Bureau’s 2007 Community Survey, approximately 414,714 Americans claim to be of full or partial Croatian descent. That’s a considerable number since Croatia’s population is only around 4 million.

The Immigration Encyclopedia reports that Croatians were the earliest of the southern Slavic people to settle in the United States. They first settled in San Francisco. By the 20th century, the greatest concentration of Croatians had shifted to Pittsburgh and the western Pennsylvania area.

It was estimated that in the early 1900s, there were more than 200,000 Croatians living in the Pittsburgh area. It is difficult to estimate just how many Pittsburgh residents are of Croatian descent today. This is due to the fact that Croatia, as a country, has not always enjoyed the status of an independent nation-state. Immigrants who identified as Bosnians, Dalmatians, and Hungarians could be of Croatian descent.

The American Dream and Pittsburgh Steel

Croatians came to the Pittsburgh for political and economic reasons. Historically, Croatia has had a very turbulent existence. It has been conquered, ruled, and partitioned under many different forms of government. This is the main reason Croatians sought refuge in the United States. However Croatians also came to the states for the same reason as other nationalities. They came for the opportunity to better oneself and the American dream.

Frequently the Croatians who came to Pittsburgh found employment in the steel and coal mills or in other heavy industries. For many life was difficult. They knew little English and performed backbreaking labor to survive.

To support each other, the Croatians formed social groups. In 1893 a young newspaperman, Zdravko Muzina, came from Chicago to Pittsburgh to start a Croatian newspaper. He sought to create an organization to benefit the Croatians living in the area. He had hopes for it to be similar to the National Slovak Society. This was achieved with the help of several other Croatians in the area.

Their first organizational meeting with over 300 people was held on January 14, 1894. However, only 30 signed on to what became known as Lodge No. 1 of the Croatian Fraternal Union. Soon other groups formed nearby in McKeesport, Johnstown, Rankin-Braddock, Etna, and Benwood, West Virginia. In August 1894, these lodges came together and applied for a charter as the Croatian Association. The charter was granted in October 1894. 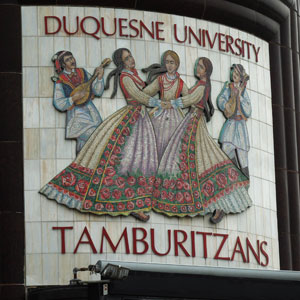 Like most others nationalities, the Croatians have blended their heritage into the American culture. One of the most recognizable efforts to keep the Croatian culture vibrant is the Tamburitzans.

A tamburica is a lute-like instrument favored by Slavic nations. Those who play it are known as Tamburitzans. The word has come to encompass so much more. It celebrates the costumes, songs, and folk dance of Croatia and other Eastern European Countries. There are quite a few Tamburitzan groups throughout the region that appear in shows or at local festivals. The Duquesne University Tamburitzans are the longest-running multicultural song and dance company. Since 1937 they have been entertaining with the folk traditions of Eastern Europe. For more than 60 years the city has hosted the annual International Pittsburgh Folk Festival which features many local ethnic traditions, including those of Croatia. 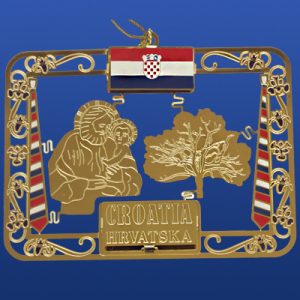 Croatians are typically Roman Catholic. In the 1900s the Croatian community in Pittsburgh built St. Nicholas Croatian Catholic Church in Millvale. The church is listed on the National Register of Historic Places due to its unique murals. In 1937 the European artist Maxo Vanka was commissioned to paint a series of murals in the church. By that spring he had completed 11 paintings. He returned again in 1941 to complete the second series of murals which depict the struggles of Croatian peasants. It represented their battle in their homeland as well as their strife as immigrants. The murals are so remarkable that Time magazine did a story on them and the artist in its July 1937 issue.

The Yugoslav Room at the University of Pittsburgh’s Nationality Rooms in the Cathedral of Learning opened in 1939. It preserves the Croatian heritage under its former country name. Throughout the year the Croatians gather at events such as Croatian Day at Kennywood and at picnics at Millvale’s Schitzen Park.

So strong are the ties of the Croatian-Americans to their homeland that Pittsburgh has a Croatian Consulate. It is located at 100 Delaney Drive in the East Hills. The Croatians who came to Pittsburgh may have left their homeland but they never forgot where they came from. They still work tirelessly to preserve their culture. Their efforts have not only enriched those who boast a Croatian heritage but have enriched and influenced the Pittsburgh area.