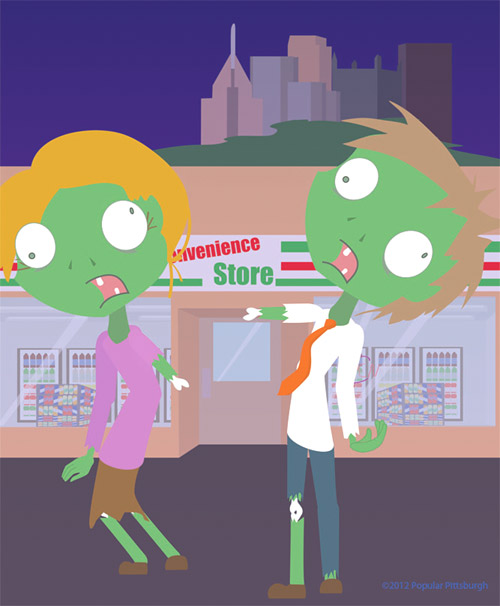 With the rising popularity of zombies in American culture, many cities are fighting over the title of “Zombie Capital of the World”. There may be no settlement to this dispute, but it’s certain that Pittsburgh has strong roots in zombie pop culture history and remains an important part of what makes Pittsburgh unique.

Originally, zombies in film were much different from the zombies of today. Movies like 1932’s White Zombie and 1954’s Plan 9 From Outer Space created zombies from the power of magic and aliens. Today’s zombies are created from a mishap in a laboratory or biological outbreak.

The Godfather of Zombies

George A. Romero changed the way zombies were portrayed in film and pop culture in the 1960’s. He was a Carnegie Mellon University graduate that got his start filming shorts for Mister Rogers Neighborhood at WQED in Pittsburgh, but is now known as “The Godfather of Zombies”.

In October of 1968, George A. Romero gave us Night of the Living Dead. The film was shot in nearby Evans City, Pennsylvania in Butler County and defined the modern day zombie. These zombies were dressed in their every day garb or burial clothes. They were slow and stupid like most zombies, but not as grotesque. The film premiered at the Fulton Theatre in Pittsburgh, now known as the Byham Theatre. It is ranked among the top profitable horror movies of all time.

The zombie trend began in the 1970’s with various adaptations of Romero’s concepts. These films were struggling to make use of these new ideas Romero brought to horror, but most fell short on creating a compelling story. It wasn’t until he released Dawn of the Dead in 1978 that the zombie movies received proper clarity.

Dawn of the Dead was filmed at the Monroeville Mall just outside of Pittsburgh and is often hailed as the greatest zombie movie ever made. The zombies this time were fast and very grotesque. Romero said he found inspiration for the movie when he saw the crawl spaces above the shops. He called upon Pittsburgh native Tom Savini to help with the special make-up effects for the film. They had worked together previously on Romero’s 1977 film Martin. Dawn of the Dead allowed Savini to highlight his ability to create gruesome effects on a limited budget and helped launch his career. Savini is now known as “The Godfather of Gore” and has his own special effects school in the Pittsburgh area.

To date, Romero has released six films in the Night of the Living Dead series and has made Pittsburgh a common setting in many of them. His 2005 film Land of the Dead was his first film made through a major studio. It was filmed in Canada due to budget reasons, but set in downtown Pittsburgh. His 2007 film Diary of the Dead follows a group of film students at the University of Pittsburgh who hear reports of the dead coming back to life while filming their own horror movie in the woods.

Romero’s vision has become a matter of pride in Pittsburgh. The city hosts a number of Zombie Walks throughout the year. It encourages people to dress as zombies and move in shambling zombie hordes. The first Guinness World Record for largest Zombie Walk was recorded on October 29, 2006 outside of the Monroeville Mall. Cities from all over the world now compete annually for the record.

Since Romero paved the way for zombie pop culture, many others have recognized Pittsburgh as the birthplace of the modern genre. Video games like Left 4 Dead make reference to Pittsburgh with in-game locations such as Mercy Hospital and Allegheny National Forest. GameWick Games in New Jersey released the card game Pittsburgh 68 that pays tribute to the original zombie classics. My Chemical Romance wrote the song Early Sunsets Over Monroeville in reference to Dawn of the Dead. Gift items such as maps of Pittsburgh’s zombie attacks and Monroeville zombie memorabilia are available for sale as well if you check out the Shop section in our Menu.

Romero and Savini aren’t the only ones in the entertainment industry making a name for Pittsburgh in the zombie world. Pittsburgh native Greg Nicotero got his start working on Day of the Dead in 1985 with an acting role and working in the special makeup department. His other experiences in zombie cinema include makeup effects for Evil Dead II, Army of Darkness, Bride of Re-Animator, Planet Terror, and more. Nicotero is currently the co-executive producer and makeup artist for AMC’s The Walking Dead.

Pittsburgh’s advancements in zombies aren’t limited to film and pop culture. In June 2005, the University of Pittsburgh’s Safar Center for Resuscitation Research made an announcement. They had managed to place dogs into suspended animation and reanimate them. The dogs were drained of their blood and then had a low temperature solution injected into their veins. Once the dogs were clinically dead for three hours the blood was returned. Then an electric shock to their hearts brought the dogs back to life.

Local Pittsburghers are very proud of the city’s zombie history. Zombie related events such as zombie walks and parties take place all year. Local writer Lucy Leitner wrote Working Stiffs, a zombie story that is set in the city’s South Side neighborhood. Pittsburgh is also home to The Zombie Opera, The Zombie Attraction at the Monroeville Mall, and Lawrenceville’s House of the Dead that all showcase the city’s rich zombie heritage.

Other cities may boast that they’re big in the zombie world. None will hold as much relevance or carry as much pride as Pittsburgh, Pennsylvania. This is where horror film legends like Romero and Savini defined themselves in the industry. They created the most influential zombie movies in horror history. The city hasn’t just developed the fictional dream of reanimation, but implemented it as reality through scientific advancements. The people of Pittsburgh join together regularly to celebrate this part of Pittsburgh that is truly unique.  It is entirely probable that Pittsburgh is the Zombie Capital of the World.

Read our Pittsburgh Zombie Contingency Plan to be ready for a zombie apocalypse.