George Romero: The Man Who Made Zombies Cool

I Just Want IT To Work

The Best of Washington County 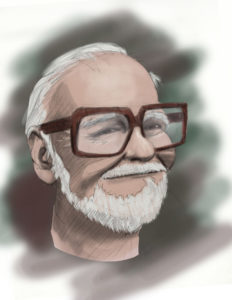 There were zombie movies before George Romero made the 1968 cult classic Night of the Living Dead, but none of them had the impact that this independent horror film had. Despite the film’s decades long cult following, the low-budget flick premiered to a less than stellar reception. Vince Canby, The New York Times movie reviewer, described his experience when seeing the movie in his review of December 5, 1968 as such:

The dialogue and background music sound hollow, as if they had been recorded in an empty swimming pool, and the wobbly camera seems to have a fetishist’s interest in hands, clutched, wrung, scratched, severed, and finally, in the ultimate assumption, eaten like pizza.”

In his January 5, 1969, review of Night of the Living Dead, renowned movie critic Roger Ebert described what it was like to be in the audience of a Saturday afternoon matinee of the film:

“The kids in the audience were stunned. There was almost complete silence. The movie had stopped being delightfully scary about halfway through, and had become unexpectedly terrifying…. This was ghouls eating people up and you could actually see what they were eating,… little girls killing their mothers. This was being set on fire. Worst of all, even the hero got killed.”

So how, when dismissed and derided by the critics, did Night of the Living Dead become the nascent film for the contemporary zombie genre? How did George Romero become such an esteemed writer/director?

To understand, you must go back to 1968. The Vietnam War was raging; Martin Luther King and Robert Kennedy had been assassinated; U.S. Olympic athletes had stunned with their Black Power salute on the medals stand. In short, the world was in cataclysmic upheaval.

Movies were changing too. So much so that the Motion Picture Association of America felt it necessary to institute a rating system. The system went into effect on November 1, 1968, just a month after Night of the Living Dead premiered at the Fulton Theater in Pittsburgh.

Prior to The Night of the Living Dead, kids flocked to see horror films. At the time they were campy and creepy rather than gory and gruesome. With this little film, George Romero tapped into the culture’s mindset and broke the horror genre mold. He did so by casting a black man as a main character, filming cannibalism and explicit gore, and ultimately killing the movie’s hero. While the film may have been too much for pre-teens used to such flicks as Hillbillys in a Haunted House or Frankenstein Created Woman, older audiences ate it up.

The Father of Zombies

Romero’s Night of the Living Dead  left its mark on Pittsburgh.  As the production location for the film, Pittsburgh became the zombie capital of the world. However, the filmmaker was not a Pittsburgh native. He was born February 4, 1940, in the Bronx in New York City. He was raised by a Lithuanian-American mother and Cuban father. Romero came to Pittsburgh to study at Carnegie Mellon University and graduated in 1960. Strangely for him, one of Romero’s first projects was to shoot a segment for Mister Rogers Neighborhood about having a tonsillectomy.

Romero and John A. Russo co-wrote Night of the Living Dead, which was originally titled Night of the Flesh Eaters. Unfortunately, the pair saw little profit from their groundbreaking film because of a glitch with the picture’s copyright.

Romero went on to film other movies like Creepshow and Knightriders, but none achieved the success of the “Dead” franchise. He also appeared in many of his films and had an acting part in Silence of the Lambs.

Romero died on July 16, 2017 at the age of 77, but his fans will not soon forget him. Each year Pittsburgh is home to A Zombie Fest, as a tribute to his work. There is a Living Dead Museum in Evans City, PA (Butler County). Through his films Romero has achieved immortality, and he was prophetic when he said, “I’m like my zombies. I won’t stay dead!”