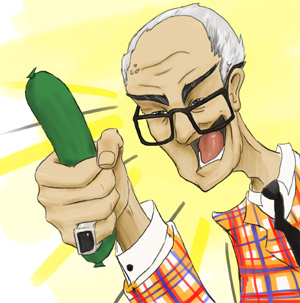 For centuries, people have looked to good luck charms to enhance their fortunes.  The ancient Egyptians wore Eye of Horus talismans, the Celts carried rabbits’ feet, and the Druids pocketed four-leaf clovers.  It seems a bit fanciful to believe that necklaces, animal appendages, and common weeds can bring good fortune, but in light of some of the Pirates lucky pieces, they don’t seem all that strange.

Fans become so invested in sports teams that they want some way to help the team and enhance their chances of winning.  Over the decades, fans of the Pirates have embraced some rather unusual charms to bolster the team’s fortunes.

Legendary Pirates broadcaster Bob Prince is credited with the birth of the green weenie during the 1966 baseball season.  The green weenie was believed to possess powers that could hex an opposing team.  Its origin is purported to come from Pirates trainer Danny Whelan, who allegedly wagged a green, rubber hot dog at Houston Astro’s pitcher Dave Giusti as he pitched to a Pirate.  Whelan shouted “You’re going to walk him!”  Whelan proved right as Giusti did walk the batter and the Pirates won the game. Prince related the weenie incident during the next Pirates game broadcast and the fans seized upon the talisman.

Green plastic rattles that looked like oversized Heinz pickle pins were created and were quickly scooped up by Bucco fans.  An article from the August 2, 1966, issue of the St. Petersburg Times chronicled how green weenie fever afflicted Pirate fans: “By now, long green balloons representing the Green Weenie adorn the broadcasting booth and other vantage points in Forbes Field. An enthusiastic fan, with a large pickle on a string, occasionally dangles it over the roof of the visitors dugout.”

The next big Bucco good luck charm, Babushka Power, was also a Prince invention.  Babushkas are women’s head scarves, and Pittsburgh had (and still has) a large population of people with Eastern European roots.  In 1974, Prince asked that the women in the area attend a certain game with the scarves tied under their chins.  Droves of babushka-clad women showed up for the game, with one woman, Dolly Mehan, being crowned Babushka Queen.  To spur on the Pirates, the women would twirl their babushkas in the air.  Within a few years, the babushkas lost their magic but not before spinning off the Terrible Towel.  It is reported that the babushkas gave Myron Cope, the iconic Steelers announcer, the idea for the Terrible Towel. 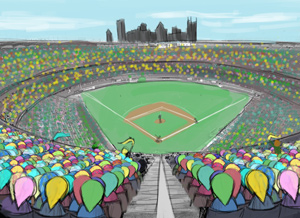 For nearly four decades, the Pirates have been without a good luck charm and for two decades without a winning team.  Enter the Zoltan.  As with the green weenie and babushka power, which were conceived out of silliness, so was the Zoltan.  Its roots are in the movie Dude, Where’s My Car?  The movie premiered in 2000 and starred Ashton Cooper and Seann William Scott.  It is one of those movies that is so bad, it’s good.  During an April road trip in 2012, for lack of something better to do, Neil Walker and some of his teammates in the visitors clubhouse decided to watch it.

“It all started in Atlanta when we were watching television in the clubhouse, and there was nothing we wanted to watch,” said second baseman Neil Walker, recalling the incident in an interview with the Post-Gazette.  We saw Dude, Where’s My Car?  And guys were like ‘Oh, we haven’t seen this in a while.’ So we watched it.  It was just so terrible and stupid. We just pulled that from it. It’s just kind of our team way of bonding, I guess.”

The thin plot of the movie is that Cooper and Williams lose their car and during their quest to find it, they endure various escapades including an encounter with Zoltan, who is the leader of a UFO cult.  Zoltan’s followers salute him by making a “Z” hand sign.

The Zoltan salute is made by opening your left hand and positioning your thumb downward, and touching your right thumb as your right hand is open and the palm facing toward your body.

After watching the movie, Neil Walker began flashing the Zoltan every time a Pirate got a hit.  Then his teammates also began to flash the salute when something good happened on the field.  And like the other good luck charms, the fans picked up on it and embraced the Zoltan.

T-shirts with the hand sign can be seen all over the area.  There are even YouTube videos giving lessons on how to properly do the Zoltan and a Facebook page called Zoltan Pirates.  To add to the lore, on July 26, 2012, Hal Sparks, the actor who played Zoltan in the movie, threw out the first pitch when the Pirates played the Cubs. 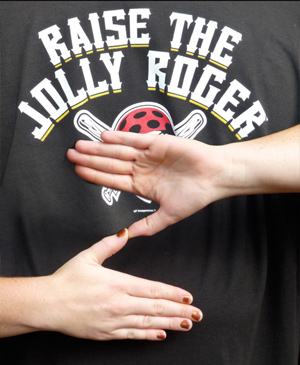 Bringing Back The ‘Z’

Many had thought that the Zoltan would die with the 2012 season, but on April 8, 2013, Andrew McCutchen sent out a tweet that said: “I’m bringing the ‘Z’ back…stay tuned.”  McCutchen scored in the first inning against the Diamondbacks and flashed the ‘Z’.

Whether a coincidence or evidence that the Zoltan is working its magic this season, in early September, the Steelers signed a new punter whose name is Zoltan Mesko.  On September 4, Mesko tweeted a photo of himself flashing the Zoltan.  A Zoltan giving the Zoltan!  Surely, that portends good things to come for the Pirates.

So whether you believe in the wonders of the green weenie, the power of the babushka, or the mojo of the Zoltan, all of these charms connect the fans to the team, help to cheer them on, and make watching the Pirates all that more fun and exciting.