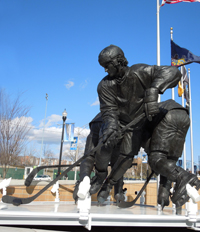 The Pittsburgh Penguins, over the past forty-plus years, have turned themselves into one of the most storied franchises in the history of the National Hockey League.  Today, led by their young captain, Sidney Crosby, the Penguins have proven year after year to be one of the NHL’s most successful franchises. They also have the title of Stanley Cup Champions in 2009.

There has been one man who has been absolutely crucial to the structure of the franchise. He was introduced to the city of Pittsburgh as a young eighteen-year-old out of Montreal.  That one man is Mario Lemieux.  Currently residing in Sewickley, PA, with his wife and four children, Lemieux is one of two current owners of the Penguins. He is the only person to win the Stanley Cup both as a player and as an owner.  Mario purchased the Penguins in 1999 to save the team from bankruptcy. Eight years later he made an agreement for a new arena, the Consol Energy Center. This would not only prevent the Penguins from being relocated, but keep them in Pittsburgh for the next 30 years.  Of course Mario’s days on the ice are what the sports world will always be remembered.

Lemieux was born in Montreal, Quebec, as the youngest of three sons to Jean-Guy and Pierrette.  One of his older brothers, Alain, found his way to the NHL for a brief period, even playing one game as a Penguin alongside Mario.  In their youth, Mario and his brothers would use anything sitting around the house to practice hockey.  Eventually their father crafted an ice rink in their front yard for them to play on.  According to old stories passed on by his family, they would pack snow onto the living room carpet so the boys could continue practicing when it became too dark outside.

At the age of fifteen, Lemieux started playing for the Laval Voisins of the QMJHL, a junior hockey league.  He walked into the league with the utmost confidence, predicting that he would break league records.  In 1983, his final junior season, he put up 133 goals, breaking Guy Lafleur’s twelve-year-old record of 130.   He set the league record that year for points in a single season as well with 282 points.  He did all of that in a mere seventy games.  Throughout Lemieux’s three years of junior hockey, he amassed an incredible 562 points.

Mario made a name for himself.  Early on, he was expected to be a sure-fire superstar once drafted. This fueled competitions for teams to finish at the very bottom of the standings in order to secure him for their team. 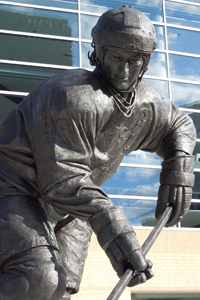 Mario was drafted by the Pittsburgh Penguins in the NHL’s 1984 entry draft, which may as well be called the Mario Lemieux Sweepstakes.  Lemieux made his presence known by scoring his first career goal the very first time he touched the puck as a Penguin.  He distinguished himself above all others in his draft class by being named to the All-Star team as a rookie, and being the only rookie to be named the MVP of the All-Star game.

Over the course of his seventeen-year professional career, Lemieux more than lived up to the expectations that were placed upon him.  He made a name for himself as one of the most dangerous and decorated scorers the game has ever witnessed.

He holds one record that, though not officially recognized by the NHL, is always held close to the hearts of Penguins fans.  On New Year’s Eve, 1988, Mario became the only NHL player to score five goals in five different ways.  He scored a goal at full strength, or five on five, a power play goal, a shorthanded goal, a penalty shot, and an empty net goal.  From a team standpoint, Lemieux won back-to-back Presidents Trophies and Stanley Cups as the captain of the Penguins in 1991-92.  In both years, he won the Conn Smythe Trophy as the MVP of the playoffs.  As a member of Team Canada, Mario was a critical component in the defeat of Team USA for the Gold Medal in the 2002 Winter Olympics in Salt Lake City, Utah.

Mario’s on-the-ice achievements, while nothing short of miraculous, were certainly hindered by the many serious physical ailments that he was forced to overcome.  His first obstacle was a back injury which developed into a herniated disc in 1990.  He missed over half of the following season, and despite the incredible pain he was facing, Lemieux led the Penguins to their first Stanley Cup, and won the Conn Smythe Trophy after leading all players in points.

The 1992-93 season started off, for Lemieux, with more promise than any other.  He went on a tear of twelve games in which he scored at least one goal–a Penguins’ record.  He was on pace to contend with Wayne Gretzky’s records of 92 goals and 215 points in a single season.  This incredible run came to a screeching halt on January 12, 1993. Lemieux made a shocking announcement that he had been diagnosed with Hodgkin’s lymphoma.  He missed two months of the season while undergoing radiation treatments.  The last day of his treatment coincided with a game against the Penguins’ archrivals, the Philadelphia Flyers.  The usually brutal Philly fans gave Lemieux a standing ovation before a game in which Lemieux recorded a goal and an assist in a 5-4 loss.

Mario was twelve points behind the leader for the league’s scoring race when he made his return. With the help of a seventeen game winning streak he won the scoring race. The Penguins earned the most points in the NHL for the season.  After the season Lemieux had his second back surgery. It caused him to miss sixty games in the following season and the entire 1994-95 season.  When he made his return he, once again, lead the NHL in points, winning his third MVP award.

The Penguins were eliminated in five games in the first round of the Stanley Cup Playoffs in 1997.  All of his various injuries had taken too much of a toll on his body. Thirteen years after Lemieux’s NHL career started, it ended, or so we thought.  He announced his retirement, and was inducted into the Hockey Hall of Fame later that year, being one of a select few to have the mandatory three-year waiting period waived.

Winning the Stanley Cup as both Player and Owner

Lemieux bought the Penguins in 1999. He promised to keep the team from moving out of Pittsburgh, or possibly folding altogether.  The following year he made his comeback to the NHL, again as a Pittsburgh Penguin.  He kept his game at a high level, leading the league in points per game every year. His health forced him to miss massive chunks of games each season.  He announced his final retirement in 2006.  The Penguins went on a dry spell by not making the playoffs from 2001 to 2007.  It wasn’t until June 12, 2009 that the Penguins helped Lemieux make history. They did this when they won the Stanley Cup over the Detroit Red Wings in seven games, making him the only person to win it as both a player and an owner.

His career has helped put him in the conversation as one of the best hockey players of all time, along with Wayne Gretzky and Bobby Orr.  It is fun to imagine, however, how his career would have played out if he had remained healthy.

Lemieux’s success as a player is only rivaled by his positive impact to hockey off the ice.  In 1993, the same year he was diagnosed with Hodgkin’s lymphoma, Lemieux created the Mario Lemieux Foundation. It provides funding for promising medical research projects.  The Foundation also supports other organizations such as the Leukemia Society, the McGowan Institute for Regenerative Medicine, the University of Pittsburgh Cancer Institute, the Lupus Foundation and the Children’s Home of Pittsburgh.

Mario also joined with many other athletes in starting another charitable organization, Athletes for Hope.  Lemieux even opened his home to young star players to mentor them and give them a place to live until they got settled in the city.  Mario Lemieux is not native-born to Pittsburgh. However, he has made the city proud and Pittsburghers have claimed him as one of their own.