The Cultural District as we know it today took shape in the early 1980s.  Pittsburgh was suffering from industrial decline and the downtown area was vacant.  It was at that time a group of leaders joined together to transform downtown.  One man that led this revitalization was the late John Heinz.  He was the chairman of the H.J. Heinz Company and an art lover.  Mr. Heinz had renovated Heinz Hall in 1971 and looked to expand the revitalization.  In 1984 the Pittsburgh Cultural Trust was formed to further carry out his vision.

Today the Cultural District encompasses a fourteen block area in the heart of downtown that offers a wide variety of art and live entertainment. Included are classical and contemporary music, ballet, modern dance, visual art, opera, musical theater, and drama. There are approximately 1,400 performances held each year that draw millions of patrons to the area giving it a cultural variety that, at times, can be unmatched. The Pittsburgh Cultural Trust, a non-profit organization, is still in charge of the Cultural Districts promotion and development.

Culture and entertainment in Pittsburgh is a more varied subject than any one website can hold!  We hope this list will whet your appetite for all the possibilities Pittsburgh has to offer. 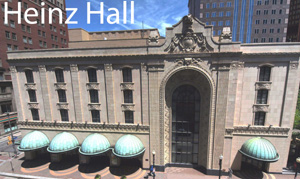 Heinz Hall is home to the Pittsburgh Symphony Orchestra and is the cornerstone of the Cultural District of Pittsburgh. This concert hall is centrally located and is what helped revitalize the downtown area of Pittsburgh.  It is known internationally as a showplace of grandeur and excellence.

The structure was built in 1927 as the Loew’s Penn Theater and was later renovated and dedicated as Heinz Hall for the Performing Arts in 1971 by the Howard Heinz Endowment.  Events include symphony concerts and a variety of other attractions such as children’s concerts and national Broadway touring shows.

The Benedum Center for the Performing Arts

The Pittsburgh Public Theatre performs in The O’Reilly Theater.  The theatre opened in 1999 and is the only newly constructed theater in the Cultural District.  Its layout allows the audience to view performances on three sides of the stage giving the theater enthusiast an up-close experience.

Adjacent to the O’Reilly Theater is Theater Square.  This area was designed by Michael Graves, in collaboration with WTW Architects of Pittsburgh.  Here you will find the main box office for any performance in the cultural district, as well as accessible parking.  In addition there is the Cabaret at Theater Square, the Backstage Bar, and the Carolyn M. Byham WQED fm89.3 Studios.

The August Wilson Center for African American Culture opened the doors to its new facility in May 2009.  The August Wilson Center encompasses all aspects of the African American experience.  It includes galleries, classrooms, a 486-seat theater, a gift shop, a cafe, and many multipurpose spaces available for rental and use by the community and to be used for visual and performing art and expression.

Formerly a vaudeville house that was known as the Fulton Theater, Byham Theater has grown and thrived since its reopening in 1991. In 1995 it was restored and renamed the Byham Theater.

It was formerly known as The Art Cinema and was reopened after renovation in 1995.  It is named in honor of native Pittsburgher John P. Harris, who created the nation’s first nickelodeon in downtown Pittsburgh.  Movie goers enjoy visiting these theaters for contemporary and foreign films presented by the Pittsburgh Filmmakers.

There are also a variety of visual art galleries in the Cultural District.  These galleries offer an eclectic assortment of art to viewers and admission is free.  Galleries include the Wood Street Galleries, Three Rivers Arts Festival Gallery, American Institute of Architects Gallery and Space.