Museums Worth a Visit

A trip to the museum can expand your knowledge, amaze the senses, spark your imagination, and provide hours of fun. The Pittsburgh area has a plethora of museums ranging from the world class to niche interest. The following is a list of museums in our area. Please remember to call ahead for individual museum hours and to inquire about new digital tours! 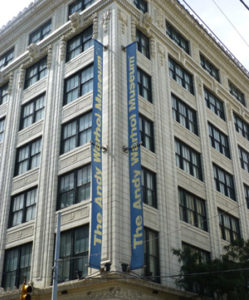 The Warhol Museum, part of the Carnegie family of museums, is dedicated to the works of Pittsburgh-born artist Andy Warhol. Located on the city’s North Shore, the Warhol Museum houses an extensive collection tracing the artist’s work from illustrator to pop icon.

Located in in O’Hara Township at the sprawling mansion of its founder, Charles B. Brown III, the Bayernhof Music Museum houses an extensive collection of music boxes and other automated musical instruments including “monkey” organs, carousel organs, and an automatic banjo.

Located in a former Pennsylvania and Lake Erie Railroad freight station, the Beaver Area Heritage Museum houses the actual dueling pistols used in the fatal duel between General Lachlan McIntosh, builder of Fort McIntosh in Beaver, and Button Gwinnett, signer of the Declaration of Independence.

In 1763, the Battle of Bushy Run engaged on this acreage, pitting the British against Delaware, Shawnee, Mingo, and Huron Indians in the conflict that was known as Pontiac’s Rebellion. Tours of the battlefield and educational programs on this turbulent time in Western Pennsylvania are available.

The Carnegie Museum of Art has more than 35,000 objects in its extensive collection and has been the place to experience some of the world’s greatest art for generations. Located in Pittsburgh’s Oakland neighborhood, it was established in 1895 and showcases fine art, architecture, sculpture, and photography.

Founded in 1895 by Andrew Carnegie, the Carnegie Museum of Natural History is also located in the Oakland area of Pittsburgh. It is ranked among the top five Natural History Museums in the country. The museum features 20 exhibit halls including Dinosaurs in Their Time, where visitors stand in awe gazing upon the colossal size of the dinosaurs that once roamed the earth.

The Carnegie Science Center, located on Pittsburgh’s North Shore, has something for everyone. Featured exhibits of the Science Center include: the USS Requin submarine exhibit, the Omnimax Theatre, the Miniature Railroad & Village, Highmark SportsWorks, and the Buhl Planetarium. Children and adults alike will be amazed with all this popular area museum has to offer.

The Children’s Museum of Pittsburgh combines fun with learning and exploring. Located in Allegheny Square on Pittsburgh’s North Side, the Children’s Museum delights youngsters and brings out the child in grown-ups. The hands-on exhibits encourage little ones’ creativity. One of the highlights of this museum is the Fred Rogers & Us exhibit, where children can visit a recreation of the Neighborhood of Make-Believe.

Since 1971, The Society for Contemporary Craft has offered exhibits in contemporary art in craft media. Located on Smallman Street in the Strip District, it also has a satellite gallery at BNY Mellon Center. In addition, it has a retail store so you can take home some works of art you enjoy.

Located in the beautiful Laurel Highlands, Fort Ligonier was established in 1758 during the French & Indian War. Eight acres of the original fort have been preserved, and visitors can learn what it was like to live on the frontier during war times.

Part of the Heinz History Center, the Fort Pitt Museum, located in Point State Park, tells the story of Western Pennsylvania’s role during the French & Indian War, the American Revolution, and as the birthplace of Pittsburgh.

The Frick is the legacy of Helen Clay Frick, daughter of industrialist and art collector, Henry Clay Frick. While there you can tour, the Frick’s mansion, Clayton, and the surrounding buildings. The Frick Art Museum can also be toured. it is home to the Frick family’s personal art collection as well as decorative art. A visit to The Frick Art & Historical Center is like stepping back in time to Pittsburgh’s Gilded Age.

The Harmony Museum is aptly located in Harmony, Pennsylvania. It captures 250 years of history which includes presentations of George Washington’s 1753 mission, Harmonist and Mennonite Religious Societies, and a collection of sporting rifles from Harmony gunsmith Charles Flowers.

The Mattress Factory is a museum dedicated to contemporary art installations. It is located in three historic buildings on Pittsburgh’s North Side in the Mexican War Streets. Exhibits change often.

Part of the Heinz History Museum, Meadowcroft Rockshelter is an archaeological site of the first Americans who inhabited the area some 16,000 years ago. Also located there is the Meadowcroft Village. It allows visitors to experience 19th Century rural village life. Temporarily closed as of March 2022

In 1824, the Harmony Society, a religious community, established a settlement in Ambridge. The group formally dissolved in 1906, but their five-acre settlement has been preserved and was designated a National Historic Landmark District in 1965. Step back in time with a visit to Old Economy.

The Pennsylvania Trolley Museum’s mission is to preserve Pennsylvania’s trolley era. It began in 1954 with three trolleys and now has a collection of more than 50 cars, attracting 30,000 visitors each year. Temporarily closed as of March 2022

Located on Pittsburgh’s North Side on East Ohio Street, Photo Antiquities has the region’s best collection of vintage photographs and antique cameras. It is focused on the preservation and education of the history of photography from 1839 to 1939.

Pittsburgh Center for the Arts/Pittsburgh Filmmakers

In 2006, the Pittsburgh Center for the Arts and Pittsburgh Filmmakers merged and became the area’s foremost visual arts organization. It has galleries in Shadyside, the Filmmakers Gallery in Oakland, and three theaters exhibiting first-run foreign and independent American films, classics, and documentaries. Exhibitions change often.

The Senator John Heinz History Center is Pennsylvania’s largest history museum and is an affiliate of the Smithsonian Institution. Located in Pittsburgh’s Strip District, it opened in 1996 and has become one of the area’s most popular museums. It chronicles the past 250 years of Pittsburgh’s history.

Soldiers & Sailors, located in the Oakland neighborhood of Pittsburgh, began as a way for Pittsburghers and Allegheny County residents to honor those who had served in the Civil War. Dedicated in 1910, Soldiers & Sailors, during the intervening decades, has evolved into a memorial to all who have served and the largest memorial in the United States honoring all military veterans. It has artifacts from the Civil War to current military conflicts.

The Western Pennsylvania Model Railroad Museum is dedicated to the exhibition of model trains and historical railroad items. It is located in Gibsonia. This nonprofit promotes and preserves the history of railroads in Western Pennsylvania through the hobby of model railroading. The museum hosts its Annual Holiday Train Show from Mid-November o Mid-January.

The Westmoreland Museum of American Art was founded in 1949. It is located in Greensburg and has amassed a collection of significant American Art. Some of which include paintings from Mary Cassatt, John Singer Sargent, and Winslow Homer.