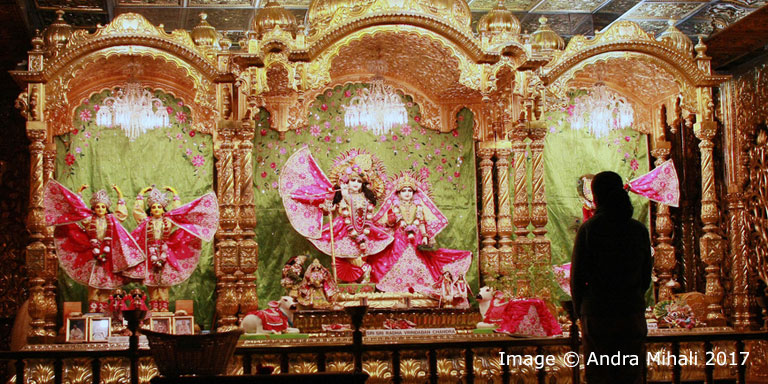 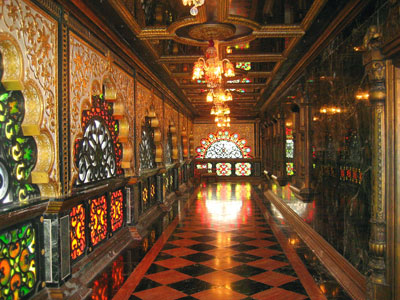 As you approach New Vrindaban, the golden spires of the Palace of Gold soar among the West Virginia trees. One does not expect such a sight in the Mountaineer State. It’s about 70 miles southwest of Pittsburgh, near Moundsville, WV. The Palace of Gold sits proudly as a memorial to the late A. C. Bhaktivedanta Swami Prabhupada, the founder of the missionary society ISKCON (International Society for Krishna Consciousness), also known as The Hare Krishna movement.

It is touted as American’s Taj Mahal and has been listed as one of the eight religious wonders to see in the United States by CNN. The Palace of Gold was originally designed in 1972 as a home for the community’s founder, Prabhupada. When he died in 1977 the palace was repurposed as a shrine. Today, the palace is open to visitors. From the exterior to the interior, the Palace of Gold is dazzling. The outside walls alone are covered with more than 8,000 square feet of 22-karat gold leaf. The interior is decorated with fine marble, mirrors, and crystal chandeliers. Astonishingly, the funds for the materials, which were estimated to cost $600,000 were raised by the members of the community. The craft work was also done by the devotees. Today, estimates of how much the palace is worth range from $10-15 million.

The majestic building is part of New Vrindaban, which was founded in 1968. It was once considered the largest Hare Krishna community in the country. In it’s heyday, there were nearly 500 members living there. A scandals caused a decrease in members and by the late 1990s, only roughly 225 remained. 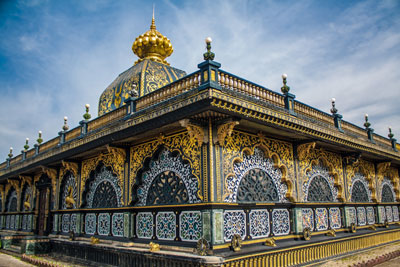 The Palace of Gold is surrounded by lush gardens. Additionally, the village is only a short walk from the palace. There, you’ll encounter a Krishna temple with a gorgeous stain glass dome under which pilgrims pray. Whether a devotee or tourist, you will be kindly welcomed and asked to remove your shoes as you step into the ashram, a site designed for meditation.

In the village is also a Govinda, a vegan restaurant that complies with the principles of healthy eating, the science of Ayurveda. On the menu, you will find the traditional samosas and chutney as well as veggie pizza and a non-meat version of a Philly steak sandwich.

Outside the temple, enjoy the promenade, which meanders around gigantic statues of Radha and Krishna. The photo-worthy scenery includes peacocks, swans, and rustic cottages that pilgrims rent for meditation and retreat purposes. 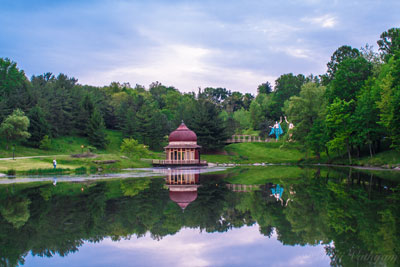 During September, New Vrindaban hosts The Festival of Colors, which is described as The World’s Happiest Event. It is an Americanized version of the traditional Indian Holi Festival. People throw colored powder at one another to promote love and friendship. You can have a fun day with family and friends.

Image © Raji Vathyam 2017The community promotes activities such as bhakti-yoga, which teaches the awakening of the love for God. According to the New Vrindaban website, they are planning to build a spacious yoga pavilion that will offer spa, sauna, massage center, and a fitness facility.

For those interested in a longer stay, The Palace Lodge on the grounds provides accommodations with a spiritual atmosphere.

If you want to escape to another world or culture a trip to New Vrindaban, is delightful and is less than 100 miles away. Your GPS might led you down unpaved roads and even a river bed so its advised to get the directions from their website.