He has no weather radar, no weather maps, and no wind speed meters, yet Punxsutawney Phil is the most famous weather forecaster in the land. Others, like Staten Island Chuck from New York City, General Beauregard Lee from Lilburn, Georgia, and Buckeye Chuck from Marion, Ohio have tried to swipe some of Phil’s forecasting fame. Phil is an original. He is often imitated, but never duplicated.

Each Groundhog Day the “seer of seers”, Phil emerges from his burrow on Gobbler’s Knob in Punxsutawney, Pennsylvania. He predicts whether there will be 6 more weeks of winter or not.

Groundhog Day had its origins in Europe and was probably brought to the United States by German immigrants. It is linked to the Christian feast of Candlemas. Both are celebrated on February 2nd. Candlemas Day is held 40 days after Christmas. It observes Jesus’s Presentation in the Temple and Mary’s Purification. In the Jewish tradition, a woman who had given birth to a male child was prohibited from entering the temple until 40 days had passed. When Simeon, a devout man awaiting the arrival of the Messiah, saw the infant Jesus in the temple, he proclaimed that the Child would be “a light for revelation to the Gentiles.” Since candles provided the major source of light, it became the custom for people to bring candles to church to have them blessed at mass. Hence, the word Candlemas. 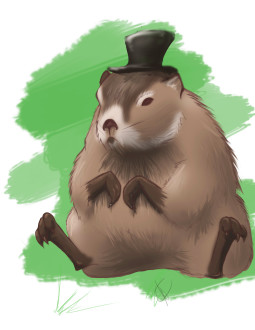 There are many sayings and songs associated with Candlemas Day and weather. A German one mentions a badger.
The badger peeps out of his hole on Candlemas Day,
and, if he finds snow, walks abroad;
but if he sees the sun shining
he draws back into his hole.

When the Germans arrived in Western Pennsylvania there weren’t that many badgers. However, Penn’s Woods was crawling with groundhogs. They adopted this fellow as their new weatherman.

Punxsutawney is located 84 miles northeast of Pittsburgh in Jefferson County. It has been celebrating Groundhog Day since the 1800s. While some assume Punxsutawney means “groundhog,” it is actually an Indian word meaning the “sand-fly place.” In the early days, Phil gave his prediction in the privacy of the woods outside of Punxsutawney. In 1887, the first official observance of Groundhog Day, Phil gave his prediction from his burrow on Gobbler’s Knob.

Life of the Party

Phil is quite the mover and shaker. He traveled to the White House to meet President Reagan in 1986 and sat down with Oprah Winfrey in 1995. He is also a bit of a party animal. During Prohibition, Phil threatened 60 weeks of winter if he wasn’t allowed a drink. Like all celebrities, Phil has an entourage called the Inner Circle. It is a group of local dignitaries who care for and feed him. They also accompany Phil when he travels. They act as translators because he’s only fluent in “Groundhogese.” In addition, the Inner Circle is responsible for planning each year’s Groundhog Day bash.

While those in Western Pennsylvania have known and loved Phil for many years, it wasn’t until the movie Groundhog Day was released in 1993 that Phil became a worldwide superstar. The movie featured Bill Murray as Phil Connors, an obnoxious weatherman. He’s sent to Punxsutawney to cover the Groundhog Day festivities…again. While there Connors winds up trapped repeating Groundhog Day over and over again. The movie became a classic comedy and the term ‘groundhog day’ has come to signify something that keeps happening over and over again.

A 1986 United Press International reported that 2,500 would be watching Phil emerge from his burrow. After the movie was released, Phil had become more popular than ever. Crowds have flocked to Punxsutawney ever since, swelling the enthusiasts to approximately 40,000 visitors a year. In accordance, Punxsutawney rolls out the welcome mat for those making the pilgrimage to Gobbler’s Knob.

It’s not easy to gain access to the “Seer of Seers.” The gates to Gobbler’s Knob opens at 3:00 a.m. on Groundhog Day. However, Phil won’t emerge with his prediction until around 7:30 a.m. For several days leading up to Phil’s proclamation, Punxsutawney hosts many events such as Phil’s Phind Scavenger Hunt and the Crowning of Little Mr. & Miss Groundhog. In addition, the Inner Circle hosts its annual Groundhog Ball. You can also purchase Phil paraphernalia and souvenirs from hats to cookie cutters in the shops in town.

There are so many events and parties leading up to Groundhogs day. Festivities kicked off with the Crowning of Little Mr. & Miss Groundhog. After that Breakfast with Phil & Gobbler’s Knob Tours begin. During the day, partiers join in on the fun at the Gobbler’s Knob Got Talent contest. Other events such as Chain Saw Carving, Groundhog Day Cornhole tournaments, Groundhog Story Time & Crafts, Meteorological Hall of Fame induction, live music, craft show, and the Annual Groundhog Comedy Extravaganza occur. You can even drink Punxsutawney Philsner beer.

They hold a free showing of the movie Groundhog Day, the Groundhog Eve Dance, and the Shadow Summit, when an illuminated fiberglass Phil is raised to the summit. Around town you can find Historical Hay Rides, Groundhog Day Weddings, Autograph Signing Session with Phil, and various parties. The events conclude with The Groundhog Day Art Show, the Groundhog Bingo, and S’mores Making among other events.

Phil doesn’t hibernate the rest of the year. In the spring the town hosts the Hogtoberfest Craft Beer Festival, and summer brings the Groundhog Festival. In the fall the Gobbler’s Knob Wine Festival celebrates autumnal glory and local wines.

Phil works only one day out of the year, but who can blame him since he has been at his job for more than 125 years. There has only been one Phil. He credits his longevity to drinking “the elixir of life,” a secret recipe, which he sips each summer at the Groundhog Picnic. While some celebrities often summer in the Hamptons, Phil, spends his days off in his second home at the Punxsutawney Memorial Library.

Phil claims 100 percent accuracy, while others in the weather prediction business say it is nearer to 50 percent. But when you are sitting atop the weather predication heap, everyone is a critic. Like the star that he is, Phil pays his detractors no mind because he is too absorbed in doing what he does best: greeting fans, making weather predictions, and being the true star of Groundhog Day.