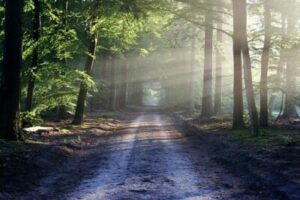 People who live in Western Pennsylvania don’t walk in the footsteps of giants but in the footsteps of Native Americans. Paths the local tribes used to get from one location to another all over the region—some were local and some traversed long distances.

The Indian Trail Steps followed a once well-used path down Mount Washington, to the Monongahela River. Chief Pontiac and his warriors used this path during the 1763 attacks on Fort Pitt. In 1909, the city built a 1,000-step set of stairs along that path. At one mile long, the Indian Trail steps were once the longest city steps in the area. Many residents used the stairs to get to work from the neighborhoods atop Mt. Washington to the banks of the Mon River. Unfortunately, the city had the steps dismantled in 1935. Yet, even today, hardy explorers have been known to try to tackle this old and obscure trail.

Before the creation of Route 19 North/Interstate 79 North, we had the Venango Path. This Native American trail ran north/south from the Forks of the Ohio River in Pittsburgh to Presque Isle on Lake Erie. It is named for the Lenape native village of Venango, which is now the site of present-day Franklin, PA.

The French and the British used this path as a military route throughout the early and mid- 1700s. In 1753, George Washington, along with explorer Christopher Gist, travelled this route to deliver a message to Fort Le Boeuf near Venango Village. The trail saw a lot of use by the French during the Seven Years War, and then by the British thereafter. The military use of the path made the nearby forts a target during Pontiac’s War in 1763. Today, Federal Street and Perrysville Avenue on the North Side run close to the old Venango Path.

The Kuskusky Path follows along the Beaver River to connect the areas that are now New Castle and Pittsburgh. Shawnee, Lenape, and Susquehannock tribes are known to have regularly used this trail. Many historians believe that during the 1800s, fugitive slaves used the Kuskusky Path as part of the Underground Railroad to freedom. Eventually, the paths were all but erased and replaced with roads. Sections of state routes 18, 51, and 65 follow portions of this trail today.

The Kittanning Path spanned east to west, crossing the Allegheny Mountains at Kittanning Gap. The path began southeast of Altoona at Frankstown and ran west, ending at the Village of Kittanning on the east bank of the Allegheny River. Kittanning is the first major Lenape (Delaware) Tribe settlement of the area. They used this path as a raid route in retaliation of a treaty which took away much of their land rights in Pennsylvania. The native village was eventually destroyed by British soldiers.

Before the word Nemacolin became associated with a resort, it was named for the Lenape (Delaware) Chief Nemacolin. The Nemacolin trail ran from Cumberland, Maryland, to Brownsville, Pennsylvania.  At the behest of explorer and surveyor Christopher Gist, Chief Nemacolin and Thomas Cresap worked to improve the trail in 1749-50. This route eventually became known as Braddock’s Road after General Braddock marched his troops along the trail in his attempt to capture Fort Duquesne. Nemacolin’s trail became the template for the Cumberland Road, the National Road and subsequently the National Pike and the National Highway or Route 40.