Should You Rent or Buy a Home in Pittsburgh?

The Road to Canton: Steelers in the Hall of Fame

You’ve probably heard the term constable before, but do you know exactly what a constable is and what one does? Unless, you’ve had a run in with the law, you may not.

Constables have been around for centuries. The term “constable” comes from the Old French word conestable meaning “steward.” The first constables were established in France at the beginning of the 5th Century. They soon became the Chief Household Officers and had the responsibility of commanding the king’s army in his absence.

In England, King Alfred established the first constable in the year 871. He made the constable the highest judge in the military and in matters of chivalry. The constable was also the supreme referee in tilts, tournaments, and martial displays.

How it came to be the English word we know today is most likely a result of how the English language adapts foreign words and creates new ones. Constable is a merging of the English words “counts of the king’s stables.” Sheriffs, who oversaw the administration of a shire (equivalent to a county) often shared the duties of the constable. That changed when William the Conqueror appointed constables to oversee individual communities or boroughs within a shire.

When the English arrived in the New World, they brought their system of law enforcement. The first constable was appointed in 1632 to serve the Plymouth Colony. The leading official was the Justice of the Peace who was assisted by the constable. The first constable in Penn’s Woods began to serve in 1664. Pennsylvania became a Commonwealth in 1681, and constables were among the first public officials of the Commonwealth of Pennsylvania.

For most of the 1800s, what a constable did was based on what type of municipality they served. In towns, townships, and wards their duties were to maintain the peace, executing warrants issued by the local justices, and policing crowds. However, in boroughs where things were less formal, they were also responsible for regulating the sale of bread, wine, and wood. Some were even allowed to pass local ordinances and levy fines.

As more municipalities established their own police forces, the role of the constable began to erode. For those that remained, laws were instituted to make the constable’s powers more uniform across the state.

What They Do Now

Today, constables are elected to their position. They may be elected at the municipal level but are governed by state law. They belong to the executive branch of government, falling under the jurisdiction of the governor of Pennsylvania. Strangely, they perform services for the Pennsylvania Magisterial courts, but do not belong to the judicial branch. They work as independent contractors.

Constables serve a six-year term. Before taking office they must complete state certification and training. In addition to functioning as peace officers, upon request by the sheriff, they may also serve the courts, (primarily District Courts). They serve arrest warrants; transport prisoners; serve summons, complaints, subpoenas, protection from abuse orders, and eviction orders as well as judgement levies.

Constables are the only law enforcement officers allowed to be present at the polls on Election Day. Deputy constables are appointed by Constables. In Allegheny County, those appointments must be affirmed by Order of the Court. 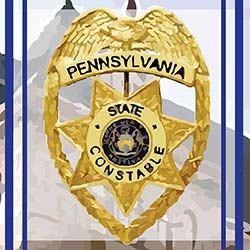 Many states across the country have done away with the position of constable. Philadelphia abolished them in the 1970s. Naturally, those in favor of constables say they save money as they draw no salary from the taxpayer and must pay for their own expenses such as uniforms, firearms, vehicles, etc. They are reimbursed on a set fee schedule.

However, many criticize the use of constables for several reasons. First, they seem to lack oversight. Reporting to the executive branch of the state and the governor, but working for the judicial branch and the magistrates.

Second, a rash of unprofessional, in some cases illegal behavior by constables, was exposed by the Associated Press in 2008. Those infractions included stealing court money, having sex with prisoners, as well as threatening people with weapons.

Whether the position of constable stands the test of time or not, someone is still needed to fulfill those duties. There’s a need for someone to serve legal documents and transport prisoners. Someone will have to monitor the polls on Election Day. While some argue that this work could be done by the police, don’t bet on the position of constable being eliminated anytime soon without a battle. It’s been around for more than 1,100 years, and with that kind of longevity, it might be difficult to eliminate the position altogether.