Fast Food and Nutrition in America 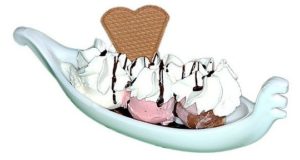 The Big Mac and the banana split were both invented in our area, illustrating how much Pittsburghers have always loved fast food. But does fast food love us?

In 2017, the Allegheny County Health Department released data on our fast food restaurants. The health department defines fast food as chain restaurants without a liquor license, whether local or national, having one or more locations in the area. According to that data, there are more than 150 different chains operating in the county.

Therefore, fast food has become a staple in the American diet. According to the website Statista.com, in 2004 Americans spent $187 billion on fast food. That sum has increased every year since until spending topped $299 billion in 2018. Along with our increased consumption of fast food our waistlines have also increased. In 2020, the U.S. Obesity rate exceeded 40 percent. We may want to blame fast food but we need to recognize our own personal daily choices. There are many factors to consider when it comes to our diet and health.

As America has grown more affluent and more women entered the workforce, people came to embrace the ease and convenience of hitting the drive-through after work.  In the 1950s there were many more single income households which allowed for more at home cooking.

There’s a debate about exactly what a healthy diet should consist of. In 1992 the first food pyramid was introduced, which advised Americans to limit fats and consume 6-11 servings of carbohydrates. Experts have been changing the food pyramid ever since.  In 2010 “MyPlate” was introduced as a new dietary guideline. It cuts back significantly on carbohydrate intake. Additionally, it doesn’t even have a category for healthy fats, which experts say are crucial for heart health.

According to a 2008 article by Ann F. La Berge from the Journal of the History of Medicine and Allied Sciences, there was one major factor that occurred to increase weight gain:
“Throughout the 1980s and 1990s, Prevention’s dominant diet recommendation was the low-fat, high complex-carbohydrate diet, labeled the Prevention diet. Prevention writers recommended this diet for both heart health and weight loss, because they assumed that a low-fat diet was low-calorie, and hence would promote weight loss. This long-standing association of low fat with low calorie would soon be upended, however, as the food industry flooded the market with low-fat—but fattening—foods. In many of these foods, sugar replaced fat so that low fat became high calorie.”

Many food manufacturers took out the fat and replaced it with sugar. According to the Diabetes Council, America tops the world in sugar consumption with the average American consuming 126.4 grams of sugar a day. In 1915, the average person consumed 17.5 pounds of sugar a year. As of 2011, it has risen to an astronomical 150 pounds per year.

Increased sugar consumption has been devastating for the health of Americans. According to an article in Harvard Health Publishing from Harvard Medical School called “The Sweet Danger of Sugar” this sweet substance is harmful to our health as Dr. Frank Hu explained: “The effects of added sugar intake — higher blood pressure, inflammation, weight gain, diabetes, and fatty liver disease — are all linked to an increased risk for heart attack and stroke,” says Dr. Hu.

Studies have shown that sugar can be as addictive. Howard Moskowitz was a psychophysicist and market researcher in the 1970s. He discovered the “bliss point.” The term states that if food contains the perfect combination of sugar, salt, and fat, than it would evoke a pleasure experience. Studies have shown that sugar stimulates the same part of the brain that addictive drugs do. Therefore, sugar addiction can be real.

Food companies know that and have increased the sugar content in their products to sell more. A tablespoon of ketchup has four grams of sugar, which is more than the sugar in a chocolate chip cookie. Read food labels, and you will be astonished to see that added sugar has been put into so many foods.

So, are fast food companies the only contributor to our obesity and health problems? No, but they can be a factor. When McDonalds debuted back in the 1950s, the restaurant offered a single patty hamburger on a bun and a 7- ounce Coke. Today, we have double Big Macs and large cokes that contain 80 grams of sugar. That is equals to 19.2 teaspoons of sugar. It is recommended to get no more than between 6 to 9 teaspoons added sugar per day. However, many fast food chains have added healthier choices to their menu, such as salads and unsweetened drinks. Consumers benefit when there are clear nutritional guidelines so they can make an informed decision. However, knowing something and acting on that knowledge is different.

Many Americans have abandoned dining at home for the convenience of fast food. We have also chosen to eat unhealthy meals. This all contributes to our poor health. In order to reverse the downward turn of our diets we need to be responsible with our food choices.