The Buzz on Pittsburgh’s Bees 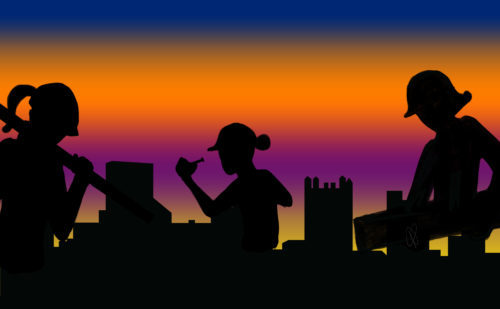 During the 1960s and 1970s, the feminist movement pushed for women to enter careers that were exclusively male-dominated, including the trades. As a result, women broke down barriers and became painters, plumbers, electricians, and the like. This movement was even reflected on the silver screen in the movie Flashdance, which featured a young woman welder as the main character.

Today, there isn’t the same campaign to push women into trade work. Rather, the attention has now turned to encouraging women to enter the STEM (Science, Technology, Engineering, and Math) fields. But the trades still offer excellent opportunities for women to make a living.

There are several pathways to enter the trades. A career in the trades does not require a four-year college degree. Receiving training through a trade school, community college, or an apprenticeship programs are the most common ways.  Education in the trades consists of coursework that geared to your employment field. There are no fluff courses. You will enter the workforce quicker and will be making money while your friends are still racking up debt in college. These factors make trade work a great opportunity for women looking to change careers.

Community college is a much more affordable option than a four-year college education. Trade schools can be a bit costlier than community college, but there are scholarships for women entering the trades. Apprenticeship program educate workers on-the-job and in the classroom at no cost to the trainee, while at the same time allowing the apprentice to earn money while acquiring skills.

Not to mention, trade jobs are available. According to The Associated General Contractors of America (AGC), 70 percent of contractors are having a difficult time finding skilled trade workers. There has been an increase in construction in the Pittsburgh area. That, combined with the retiring Baby Boomers, mean these jobs are available here, now. The Allegheny chapter of the AGC estimates that the region will be short 80,000 skilled trade workers by 2025. There will always be a need for someone to fix leaky pipes, lay bricks, install electrical wires, etc., so these types of careers are not likely to disappear with innovation or technology. Furthermore, the positions usually pay well. This provides women the opportunity to earn a lucrative living as well as job security.