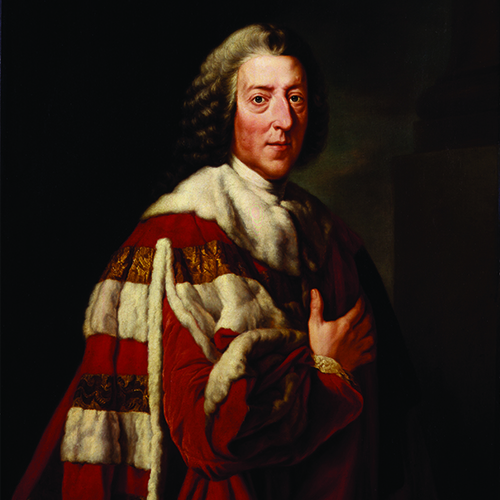 Pitt was born on November 15, 1708, in Westminster, England, to Robert Pitt, a Member of Parliament, and Harriet Villiers, granddaughter of the Fourth Viscount Grandison. His paternal grandfather was Thomas “Diamond” Pitt, who was governor of the East India Company in Madras, India. He acquired the “Diamond” nickname because of the valuable diamond he secured while in India, one of the world’s largest. He sold this gem to the regent of France, netting a large fortune and establishing the Pitt family as one of standing but lacking in nobility.

William Pitt was educated at Eton, and it was there that he first experienced an attack of hereditary gout—something that plagued him for his entire life. In 1727, he entered Trinity College at Oxford. However, when his father suddenly died, Pitt left Oxford and transferred to study at the University of Utrecht in what was then the Dutch Republic.

After a brief stint in the military, he was elected to the House of Commons. There, he established himself as a great orator, an opponent of the patronage system, and an outspoken critic of Prime Minister Robert Walpole’s policies. Criticizing the Prime Minister was essentially criticizing the king, and earned Pitt the wrath of King George II.

Pitt was appointed to various prestigious positions such as paymaster-general and Secretary of State for the Southern Department, which included southern England, Wales, Ireland, and the American Colonies. Many of these positions were known for being rife with corruption, where the occupant could line his pockets, but Pitt proved to be upright and honest. He married Hester Grenville in 1754 and had five children with her.

He was also an adept political leader during the Seven Years’ War. During this time, Pitt treated the American colonists as compatriots and not subordinates to the English crown. Those actions earned him the respect and admiration of the colonists. So much so that after Fort Duquesne was captured from the French by the British, the fort was renamed Fort Pitt in 1759 in his honor. Fort Pitt grew into what is now known as Pittsburgh.

Pitt eventually returned to the House of Commons, and after George II died, Pitt was charged with forming a new government and was appointed Lord Privy Seal, which came with elevation to the House of Lords, necessitating Pitt to accept a peerage, something heretofore he had declined. William Pitt was named the Earl of Chatham in the county of Kent. He served as Prime Minister from 1766-1768.

As King George III imposed increasingly harsher penalties on the American colonies, Pitt came to their defense. Although Pitt did not support American independence, he did advocate for finding a compromise with the American colonies over rising tensions. He proposed the “Provisional Act,” which would both keep Parliament as the authority but would also meet colonial demands and grant the colonists rights. The House of Lords would have none of it and defeated the proposal. Once war broke out, Pitt predicted that the American colonists would not be defeated.

The colonists so esteemed Pitt that the June 5 issue of The Pennsylvania Gazette reported that the residents of Baltimore erect a statue for Pitt, reporting “in Honour of the glorious and truly patriotic WILLIAM PITT, esq; as in Acknowledgment for the innumerable Services (not only) done to this Province, and continent, but to the Lovers of Liberty in general.” The same issue also reported that in Boston patriots hung portraits of William Pitt in their homes.

By 1778, Pitt was crippled by gout and attended his last session of Parliament on April 7, 1778. He retired to his home in Kent where he died on May 11, 1778. Though he had ruffled many feathers while in Parliament, he nevertheless was known for being fair, upright, and honest, earning him the moniker of the “Great Commoner.”

After a public funeral, Pitt was laid to rest in Westminster Abbey with the following inscription on his monument:

Erected by the King and Parliament As a Testimony to The Virtues and Ability of WILLIAM PITT EARL OF CHATHAM During whose Administration In the reign of George II and George III Divine Providence Exalted Great Britain To a Height of Prosperity and Glory Unknown to a Former Age Born November 15, 1708; Died May 11, 1778.

His son William Pitt the Younger also became Prime Minister, taking the helm at the age of 24, the youngest Prime Minister ever. He is also well-regarded and noted for working for the “Catholic Emancipation Act,” which would have granted Catholics freedoms and for attempting to abolish the slave trade. Sadly, the “Catholic Emancipation Act” was defeated in Parliament, prompting Pitt to resign. A friend of abolitionist William Wilberforce, Pitt worked with Wilberforce to eliminate the slave trade, but he was stymied in Parliament once again. It was only after Pitt’s death that slavery was abolished. Like his father, William Pitt the Younger is well-regarded and buried in Westminster Abbey.

Both men were noted for their integrity and for being champions of freedom. In addition to Pittsburgh, numerous streets, towns, counties, and colleges and universities around the world bear either the name Pitt or Chatham, commemorating the two men including our own Chatham College and the University of Pittsburgh.

In addition, there is a bust of Pittsburgh’s namesake, William Pitt the Elder, in the City-County Building on the first floor. It was presented to the city in 1922 by former London Mayor Sir Charles Wakefield to Mayor William A. Magee on the anniversary of the Battle of Grant’s Hill.