Many think of Shamrocks, Green beer and Parades for St. Patrick’s Day. For Floyd Hughes, my late grandfather, it always made him think of flooding and rubber boots. 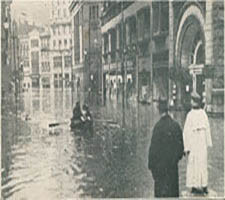 In March 1936, my grandfather, was a 21-year-old shipping clerk for Eastman Kodak in Pittsburgh. He was a husband and father of a 9-month-old daughter. From Spring Hill, where he lived, he took a streetcar Downtown to work everyday. He began his career at the 606 Wood St. location seven years earlier at the tender age of 14, working as a delivery boy.

As a grandson of Irish immigrants, he planned to celebrate the holiday in the traditional ways. However, in 1936, the three rivers surrounding Pittsburgh would change the plans for a parade and so much more.

Pittsburgh was in a precarious situation. It was a time before flood control and Weather Channel meteorology. A rapid spring thaw caused the waters to flow over the banks of the rivers. The waters rose and, one by one, swallowed the streets of the city. The water continued to rise and reached my grandfather’s building on Wood St.

The rear of the Eastman Kodak offices shared Arbuckle Alley with the Duquesne Club. The water rose rapidly. Many of the workers and patrons of the exclusive club were left stranded inside.

My grandfather and some of his co-workers donned their boots. They then began carrying the people inside the Duquesne Club to the higher ground of the Presbyterian Church on Sixth Avenue.

By the time all were safe my grandfather’s building was engulfed in two feet of water. He couldn’t return even to get his wallet from his locker. He headed to the gas company where his cousin worked. Upon arrival, he was told that everyone had headed over to Dutch Henry’s Tavern on Diamond Street.

There, he borrowed money from his cousin and her boyfriend. The phone lines were now down. He sent a telegram to my grandmother, Gert, so she knew he was fine.

Together he and his friends walked to Pennsylvania Station. They hoped to catch a train to the North Side. Unfortunately the Fort Wayne Station on Federal Street was also under water. The group then took a train to Crafton. They spent the night at the home of his cousin’s boyfriend. He remembers celebrating St. Patrick’s Day by “sitting in the dark cooking coffee over a candle.”

The next morning he hitched a ride to the West End Bridge. From there he walked all the way to Spring Hill. By the time he was home he was exhausted and covered in mud. My grandmother and her mother, my great-grandmother Ledergerber, refused to let him into the house. They feared he’d carry a disease to the new baby. Ironically, as he was removing his filthy boots, the telegram boy arrived with the message he’d sent the day before.

The next few days at work were spent cleaning up. He was tossing flood-damaged merchandise and blasting the marble floors of the office on Wood Street with fire hoses.

To my grandfather St. Patrick’s Day of 1936 was full of water, mud, and inconvenience. he ived to 94 and had many St. Patrick’s Day celebrations. However, you can “bet your boots” that this was the most vivid in his memory.