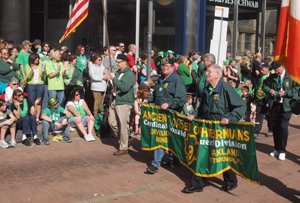 Pittsburgh is often associated with black and gold. However, when it comes to the Irish in the area, they’d paint the city green. Almost from its founding there have been Irish in Pittsburgh. The first arrivals were the Scots-Irish in the 1700s. Then later in the early 1800s the Irish Catholics began to arrive. Near the middle of the 1800s, The Great Potato Famine brought thousands more. Many found work with the railroads. According to the U.S. Census Bureau, nearly 11 percent of the city’s population claims some Irish blood. This makes Pittsburgh home to the ninth largest population of residents listing Irish as their primary ancestral group.

Pittsburgh celebrates its Irish pride year round, not just on St. Patrick’s Day. The Irish Centre of Pittsburgh strives to educate its members and the community about the culture of the Gaelic people. It hosts lectures, classes, arts and crafts, music, drama, and dance, as well as social and athletic events to preserve the city’s Irish heritage. 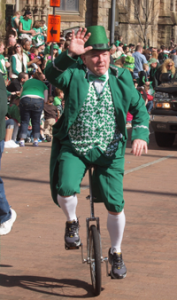 Many Irish associations are active in the area, including the Ancient Order of Hibernians and the Ladies Ancient Order of Hibernians, as well as The Knights of Equity and Daughters of Erin. Only three cities in the nation, Pittsburgh, Buffalo and Detroit boast chapters of the Knights of Equity. The Ceili Club promotes traditional Irish dancing and folk music. The Pittsburgh Ceili Club hosts lessons and a dance at Mullaney’s Harp and Fiddle pub in The Strip District. The Gaelic League of Pittsburgh sponsors classes that promote the Irish language. 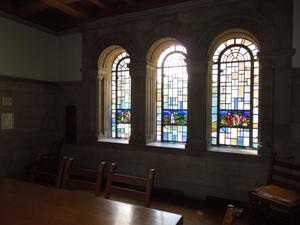 There are many Irish pubs in Pittsburgh where patrons can go to experience the Irish culture. Mullaney’s Harp and Fiddle holds several events that help patrons to connect to their inner Celt. There is an annual Oyster Fest and a Halfway to St. Patrick’s Day celebration. Perhaps their most unusual event is the Lisdoonvarna Matchmaking Festival. It is modeled after the one held annually in Lisdoonvarna, County Clare, Ireland. Singles come from all over the world to Lisdoonvarna, Ireland, to find their true love. Who says that Irish charm can’t cross the pond? At Mullaney’s, lads and lasses flock to the pub for its version of the Lisdoonvarna Festival. It is held twice a year. Local matchmakers work to pair up couples. So far more than 70 couples have found love at the festival.

For those who can’t wait until St. Patrick’s Day there’s the Pittsburgh Irish Festival’s “Halfway to St. Patrick’s Day” celebration. It  takes place in September. For nearly 20 years, this three-day exhibition of Irish culture and fellowship has drawn more than 25,000 visitors.

There are several Irish dance academies in the Pittsburgh area where you can learn the traditional steps of Irish dancing. These dance companies perform at various Irish gatherings throughout the area. They also often dance competitively. A visit to the Irish Room at The University of Pittsburgh’s Nationality Rooms at the Cathedral of Learning is another great way to immerse yourself in Irish Culture. It features Celtic symbols, architecture and a replica of the Book of Kells, an original cornerstone from the Abbey of Clonmacnoise.

The Pittsburgh Irish and Classical Theatre is committed to producing actor-centered, language driven modern classics of Irish and world theatre. It has staged acclaimed productions of The Seagull, James Joyce’s The Dead, and Jane Eyre. 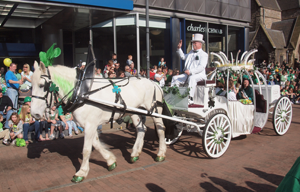 For the Irish, the pinnacle for celebrating all things Irish is St. Patrick’s Day. Pittsburgh’s first St. Patrick’s Day parade was held in 1869. It had been held sporadically during the first half of the 20th century.

It’s a good thing no parade was scheduled for 1936 for it would have taken place in a few feet of water. On March 16th that year a quick thaw caused the three rivers to overflow. The city was devastated. In the downtown area 65 businesses were flooded. For days the area was without electricity. Damage was estimated at $250 million, which would be over $3 billion adjusted to today’s economy.

During the second half of the 20th century the popularity of the parade grew. The parade has become so popular that not even enormous winter storm can stop it. In 1993, the worst snowstorm in 100 years struck on the day of the parade. Although you could barely see hundreds of hearty Irishmen and women marched in the parade.

When it comes to their ancestry, the Irish are a bit like the post office. Neither flood nor snow will keep them from celebrating their rich and wonderful heritage.