The Rolling Stones in Pittsburgh

Randy Pausch and the Last Lecture 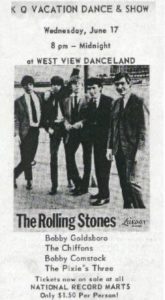 Often called the world’s greatest rock and roll band, The Rolling Stones formed in 1962 in London. The first year of “the Rollin’ Stones” consisted of members coming and going; the first stable line-up debuted Mick Jagger, Brian Jones, Keith Richards, Bill Wyman and Charlie Watts in January 1963. The group started out playing covers with roots in blues and early rock and roll. Back then, they were often associated with the youthful and rebellious counterculture of the 60’s. By 1965, they found greater success with their own material. Still active in 2021, The Rolling Stones are one of the most popular and enduring bands of the rock era.

Boasting six decades of rock fame, the Rolling Stones are in a category all their own. Only the Dutch progressive rock group, Golden Earring, has been around as long the Stones. Founded in 1961—a year before the Rolling Stones—Golden Earring called it quits in February 2021 when one of their members became seriously ill.

The Stones in Pittsburgh 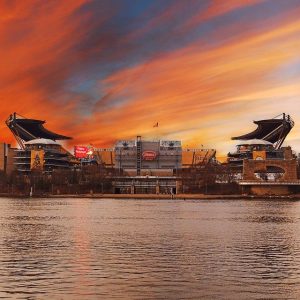 With that many years under their belt, The Rolling Stones and Pittsburgh go way back. The group has played concerts here 11 times in their six decades of fame. I’m not sure if any other group can boast playing at Heinz Field, PNC Park, Three Rivers Stadium, the Civic Arena, AND West View Park’s Danceland. Yes, The Rolling Stones first came to Pittsburgh in 1964 and played to 400 people at Danceland in West View Park. At their latest Pittsburgh show, Mick Jagger made a call back to that first appearance. He asked, “Did anyone here climb under the fence (that day)?” Then, he followed up with, “Well, thanks for coming back.”

October of 2021 finally brought the Rolling Stones back for their “No Filter Tour” (after being postponed for a year due to the pandemic). Many are speculating that this will be their last as the core members are in their mid- to late 70s. The Post-Gazette noted, “this time, the Stones travel with heavy hearts, having just lost the heartbeat of the band, Charlie Watts, in August.”  The show began with a dedication to their drummer of 59 years. For the next two hours, Keith Richards, Ronnie Wood, Mick Jagger, and the rest of their ensemble, left it all on stage with their performance. The 70-year-old rockers were full of energy as they hopped and danced through the 19-song set.

Mick Jagger embraced his short visit in the ‘burgh. While talking to the crowd he alluded to his friendship with the late Andy Warhol; Warhol designed the band’s Sticky Fingers and the Love You Live double album. Jagger quipped that he hadn’t enough time for “glaring at [himself] at The Andy Warhol Museum,” but he did fit in a stop at Primanti’s. He even pulled out a Terrible Towel during the last number.

The Rolling Stones have been around for a long time. We don’t know if they will ever be back to play in Pittsburgh again, but one thing is for sure: The Rolling Stones may just be the greatest rock ‘n’ roll band of all time. 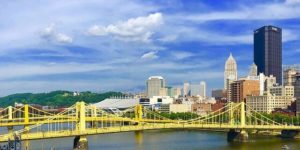 The Rolling Stones’ Appearances in Pittsburgh