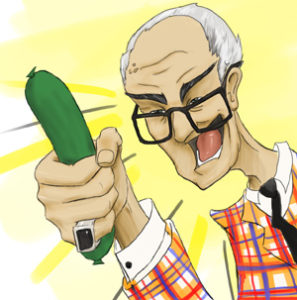 Pittsburghers are no strangers to talismans.  During the 1966 Pirates baseball season, legendary broadcaster Bob Prince introduced the Green Weenie, a green plastic rattle that was shaped like a hot dog.  When shaken at an opposing team, the Green Weenie was supposed to jinx them.  Eventually, the Green Weenie lost its magic and was replaced by another Prince creation, the babushka.  In 1974, Pirates fans were instructed to wave head scarves to bring good luck to the team.  Though like the Green Weenie, “Babushka Power” eventually lost its mojo.

But nothing has whipped up more good luck in Pittsburgh than the beloved Terrible Towel.  In the fall of 1975 when the Steelers were headed to the playoffs, the late Steelers sportscaster Myron Cope, who was then working for WTAE, was called into the general manager of WTAE radio’s office.  WTAE’s management wanted a gimmick to get the fans involved and prove to their advertisers the magnitude of Cope’s popularity, thereby inducing them to sponsor his broadcasts.

The Birth of the Terrible Towel

During the brainstorming session, one of the radio executives suggested a towel because nearly everyone had one and they were portable and lightweight.  Cope recalls saying, “We could call it the Terrible Towel.  Yes, and I can go on radio and television proclaiming, ‘The Terrible Towel is poised to strike!'”

A few days later, Cope took to the airwaves, urging Steelers fans to bring black and gold towels to wave at the playoff game, and every day leading up to the big game Cope proclaimed:  “The Terrible Towel is poised to strike!”

Cope, for all of his bravado, was not sure the gimmick would catch on, and he came under criticism from the media and some of the Steelers players for this foray into sports fanaticism.  But on game day Cope estimated that nearly 30,000 fans showed up waving Terrible Towels.  The weather was nasty, cold and wet, and after wide receiver Frank Lewis wiped his hands with a Terrible Towel, he made an acrobatic, one-handed catch from Terry Bradshaw.  A legend was born!  The Steelers went on to win Super Bowl X. 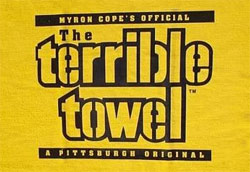 The First Towels Came from Home

At first fans brought black or gold towels they had on hand, but recognizing a blossoming market, Gimbel’s Department Store approached Cope about putting a Terrible Towel logo on towels and selling them.  In 1978, the first official Terrible Towels hit the shelves at Gimbel’s and sold out within hours.  They have been selling well ever since.  In 1996, Cope donated the rights to the Terrible Towel to the Allegheny Valley School, which cares for people with mental retardation and physical disabilities.  Cope’s autistic son David received care at Allegheny Valley School.  To date, the school has received more than $3 million in proceeds from towel sales.

All great artifacts like the Holy Grail or Excalibur inspire lore.  The Terrible Towel is no different.  During one playoff game against the Houston Oilers, Steelers fan Larry Opperman, wearing only a bathing suit with two Terrible Towels as loincloths, leaped onto the field at Three Rivers Stadium and ran, waving another Towel, past the Oilers’ bench and through the Oilers players on the field.  Two days later, Opperman showed up at Cope’s office and presented him with one of the towels he had worn.

Initially, the Terrible Towel’s magic was reserved for post-season games, but the towel’s power could not be contained.  It now can be seen waving at almost every Steelers game and in other unlikely places.  It has become the custom of Steelers fans to travel with the towel.  The towel has been to the South Pole, atop the Alps and Mt. Kilimanjaro, to the Vatican, the Riviera and the Great Wall of China.  Military personnel have taken it to Afghanistan and Iraq.  Before the 2008 AFC Championship game, the crew of the International Space Station displayed it.  Babies born in Pittsburgh during a run to the Super Bowl are swaddled in Terrible Towels and Steelers’ tassel caps in local hospitals.

The Terrible Towel Tolerates No Disrespect

It is an affront to Steelers fans everywhere to disrespect their beloved towel.  Those who do risk the towel’s wrath.  Before the 1994 playoff game with the rival Cleveland Browns, Earnest Byner of the Browns stomped on a towel that Steeler Brentson Buckner had accidentally dropped.  In turn, the Steelers stomped the Browns 29-9.

T. J. Houshmandzadeh foolishly flouted the towel’s power during the December 4, 2005, regular season game.  After scoring a touchdown, he wiped his feet with a Terrible Towel.  The Bengals won that game, but the Steelers trounced them in the playoffs on their way to winning Super Bowl XL.

On January 27, 2009, before the Arizona Cardinals left Phoenix to play in Super Bowl XLIII against the Steelers, the mayor of Phoenix gave a Terrible Towel to the Cardinals’ mascot who proceeded to wipe his armpits with the towel.  Then the mayor blew his nose into it.  They would come to rue their actions; the Cardinals lost the Super Bowl to the Steelers 27-23.

Before this year’s playoff game against the Jets, Jets fans were recorded on YouTube stomping the Terrible Towel.  The Jets fell behind early in the game and never were able to overcome the deficit.   Before his passing, Cope reflected on the enigma of the Terrible Towel:  “I did not see the Terrible Towel as witchcraft to hex the enemy.  It would be a positive force, driving the Steelers to superhuman performance, but if it experienced a yen for mischief and created fatal mistakes by opponents, I would tolerate that.”