The Spirits of the Steel Mills 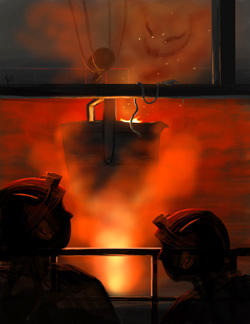 When you’re walking up through Two Shop
You’ll know someone is around
If you hear a sort of clanking
And a hollow moaning sound.
For the ghost of Jim Grabowski
Who was killed in ’22
Must forever walk through Two Shop
Which I will explain to you.
Jim fell into a ladle,
And they couldn’t find a trace,
So they couldn’t take the body
To a final resting place…
Yes, there is a ghost in Two Shop,
I have seen this specter twice,
And you’ll stay away from there at night
If you heed my advice.

This macabre poem tells the fate of Jim Grabowski, one of approximately forty workers who died at Jones & Laughlin Steel’s Two Shop at the Southside mill complex. According to legend, Jim Grabowski tripped over a rigger’s hose and fell into the foundry ladle. He was immediately liquefied. His death occurred in 1922 but until the complex was demolished in 1960, one could hear his anguished cries for help throughout the shop, followed by demonic laughter. Was the laughter indicative of the madness of a man never put to rest, or perhaps something more sinister: foul play?

Jim Grabowski was not the only man to meet his fate in the ladle of J&L Steel’s Two Shop. When a man fell into the ladle, the tainted steel would be buried or dumped in a vacant lot. Without any body to bury or even ashes to put in an urn, steel workers began honoring the fallen by taking a small portion of the polluted steel, allowing it to form into a nugget, and presenting it to the worker’s family as some form of closure.

After the Two Shop closed and during the process of building the Four Shop, some of the tainted steel was found on the site of the old Two Shop. The steel was broken up and used for scrap, a process that some say disturbed the spirits of those who died in Two Shop, forcing them to re-experience their horrific deaths in the ladle.

Today, the site of the old Southside mill complex is home to a massive entertainment and shopping center. How do the spirits of those who died at the steel mill feel about it? If you’re ever catching a movie at the SouthSide Works Cinema and you smell the harsh fumes of molten metal, ask the guy sitting next to you, because he might have been there.

Back when smoke from the J&L Steel Mill still billowed 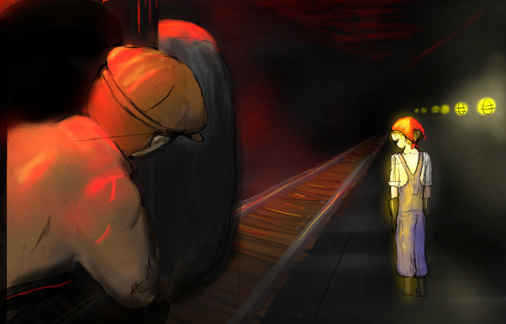 While working his shift one night, the student happened upon a young woman standing beside the track a few feet ahead of him, describing her as being dressed in coarse clothes and wearing a red bandanna tied over her hair. Fearing for her safety, the student called to the woman, telling her she was likely to be killed standing around in such a dangerous area. Her reply? “I can’t be killed. I’m already dead.” Stunned, the student drove the car out of the tunnel and immediately reported to his boss.

When told the story of the strange encounter, the foreman wasn’t surprised to hear it.  He informed the student that the woman was known as Slag Pile Annie. During WWII, she had driven the exact same train the student was currently operating. The foreman went on to tell the student that she had been killed in an accident in the tunnel five years before the student’s conversation with her. I wonder if he kept that job?

The Southside mill complex isn’t the only steel mill 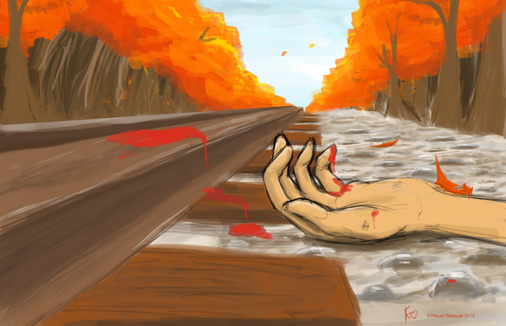 with ethereal guests. Edgar Thomson Steel Works in the North Braddock area of Pittsburgh has a few of its own as well.

One of the more bleak hauntings involves a ghost known as “The Hamburg Ghost”. Named because he can sometimes be spotted on Old Hamburg Road near the mill. The spirit was first seen in February 1967 during the graveyard shift at the No. 16 boiler. A man described it as “a faceless apparition which levitated about seven inches from the ground.” The reason for his ghostly presence? According to local legend, the ghost’s wife was murdered on Hamburg Road, causing him to fall into a depression so severe that he eventually took his own life by jumping in front of a train, severing his head in the process. He would return to the road where his wife met her untimely death, hopelessly searching for his past love.

Two other theories exist about the spirit that haunts boiler No. 16. One theory says the ghost is a man who committed suicide by jumping into a ladle in the mill; others believe it is the spirit of Joe Magerac, a mythical figure who allegedly worked at the mill.

Management at the steel mill doesn’t appreciate employees spreading rumors of ghostly visitors.  One employee recalled seeing an apparition of a man wearing coveralls, an old cap, and carrying a lantern. The upper half of his body was easily visible, but the bottom half was nothing but a green haze. The story goes that a man was backing up cars on the Union Railroad that runs through the steel mill but when he yelled for the engineer to stop the cars, the engineer didn’t hear him, and the man was cut in half. The employee said the spot where the death took place still carries an unholy chill.