Build Your Defenses Against the Flu 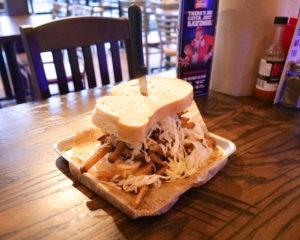 Philly has its cheesesteak. New Orleans has its po’boy. New England has its lobster roll. Pittsburgh has the Primanti sandwich.  The classic sandwich includes two slices of Italian bread, grilled meat of choice, melted provolone, vinegar-based coleslaw, sliced tomatoes, and, of course, french fries. But, how did this unique sandwich come to be?

A Need to Fill

As is often the case, necessity is the mother of invention. It is believed that the first sandwich was created in 1762 when the Earl of Sandwich, while playing cards, asked that his meat be placed between two slices of bread so that he need not have to step away from his game.

Like the good old Earl, Joseph Primanti recognized a need that needed to be filled in 1933. Truckers driving goods in and out of The Strip District needed to eat. So he set up a small sandwich cart. It may have been the Great Depression, but Joseph and his brothers were soon successful enough to open up a small eatery in the Strip.

Though, it wasn’t until a few years later that the classic Primanti sandwich topped with french fries was born.

The story goes that one winter a trucker had an abundance of potatoes, and he brought them to Primanti Bros. Joe DiPriter, a cousin, sliced them up and fried them. The smell of fried potatoes had customers watering at the mouth. Joe went ahead and plopped a handful of fries on their sandwich, giving birth to the Almost Famous sandwhich we know and love today. 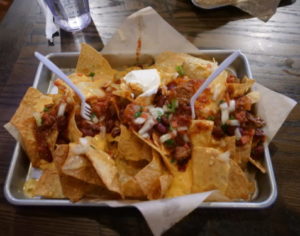 Primanti Bros. location at 18th Street in The Strip was initially open from 3 a.m. to 3 p.m. to accommodate the truck drivers and workers in the area. Today, it is open 24/7. With its reputation for good food and late hours, it has attracted an eclectic group of diners—from college students out after a night of drinking to those looking for an after-hours place to grab a bite to eat. It’s became almost a cliché that a shot of a Primanti sandwich was included in every national sports broadcast from Pittsburgh.

In the 1970s, the Primanti Bros. sold the business to Jim Patrinos, who opened a second location near the University of Pittsburgh. Since then, Primanti Bros. restaurants have proliferated as acclaim for their sandwich has spread. In Western Pennsylvania, there are now 19 locations. The chain has spread to parts of Maryland, Michigan, Ohio, and West Virginia too. It has even crept to the central and eastern parts of the state. Who knows? With its popularity, the Primanti sandwich may just take on the Philly cheesesteak to make it the reigning sandwich in Pennsylvania.