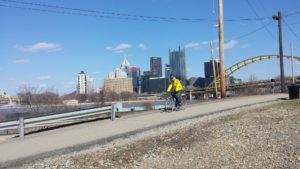 You may have seen Pittsburgh on foot, by car, from a boat, from the overlooks on Mt. Washington, or maybe even from a plane when you’ve flown over the city.  But have you ever seen it from a bicycle?  There’s something special about seeing the ‘Burgh from a bike.  Like walking, it brings you up close and personal with the city.  With the wind whipping through your hair, it gives you a sense of freedom, harking back to those carefree childhood days.  Unlike walking, biking covers more terrain in a shorter period of time, allowing you the opportunity to take in more of the city and enjoy some stops along the tour.  It’s a great way to get some exercise while enjoying the sights and sounds of the city.  Even the kids will enjoy it.

Several different trails compose the Three Rivers Heritage Trail, a 24-mile route that primarily courses along both banks of each of our three rivers.  Seeing Pittsburgh on two wheels is an easy ride, mostly on dedicated bike paths, and without many hills, and it gives you a grand tour of the Golden Triangle.  The following briefly describes each segment of the Three Rivers Heritage Trail.

Furthest to the west on the Ohio River is the Chateau Trail, which has an endpoint just south of the McKees Rocks bridge and winds past Brunot Island through the Chateau neighborhood of Pittsburgh’s North Side.  It passes the Rivers Casino and Carnegie Science Center before connecting with the North Shore Trail.

From the fountain at Point State Park, head around the bend toward the Monongahela River and the Eliza Furnace Trail, which lines the north shore of the Mon River.  Once it clears the heart of downtown Pittsburgh, it passes the Allegheny County Jail, from which this portion of the trail has acquired the nickname the “Jail Trial.”  This section of the trail is a visual history of the city as it has transformed from an industrial center to a technology and service-based economy.  You will pass former industrial sites that have been turned into office and research centers.  At the Hot Metal Bridge the trail splits. The Panther Hollow Trail leads into Oakland and the city’s education center.

The North Shore Trail, as its name suggests, hugs the north bank of the Allegheny River as it stretches from the North Side in the city of Pittsburgh, to its suburban endpoint in Millvale.  This eight-mile trail takes you past Heinz Field, PNC Park, and the Mr. Rogers statue.  It also gives you a beautiful view of the Point from a distance.  There are plenty of restaurants in this portion of the trail where you can grab a bite to eat.  Along the trail, you’ll encounter three similar bridges, or what are sometimes called Pittsburgh’s three sisters bridges: the 6th Street Bridge, also known as the Roberto Clemente bridge, the 7th Street Bridge (Andy Warhol bridge), and the 9th Street bridge (Rachel Carson bridge), all of which join the North Side to downtown Pittsburgh.

Further along, you will pass the H. J. Heinz Company and Washington’s Landing on Herrs Island in the Allegheny River.  If you’re inclined, take the side trail onto Washington’s Landing and explore the luxury homes that take river living to new heights, and  scout the office complexes that call this “island in the stream” home.  Back on the main trail, you will head north to the trail’s terminus at Millvale’s Riverfront Park.

If you cross the Hot Metal Bridge, you have two choices of directions.  Head East to connect to the Great Allegheny Passage, a 334-mile bike route that leads to Washington, D.C.  Or head west back toward the beginning of the Ohio River.  While pedaling, you will take the South Side Trail through Pittsburgh’s swinging South Side and Riverfront Park.

As you travel further west, you connect to the Station Square Trail, which passes the Station Square entertainment complex and the buildings that were once the Pittsburgh & Lake Erie Railroad’s home.  The trail ends on West Carson Street, just across from Point State Park.

Whether you take on only one portion of the trail, or several, or perhaps all 24 miles of the trail, you can be certain that you will be seeing the city of Pittsburgh up close and personal.

The endpoint for this trail is located at 24th Street in Pittsburgh’s Strip District, and this route courses along the Allegheny River’s South Shore.  Needless to say, since this trail cruises past the city’s market district, there are plenty of places for you to eat.  Heading into town, the trail skirts The David Lawrence Convention Center and leads into Point State Park and the picturesque waterscape at the confluence of the Allegheny and Monongahela Rivers.  You can be refreshed by the spray of the fountain at the tip of Point State Park while you ponder the city’s founding at the former sites of Fort Pitt and Fort Duquesne.