We’ve all heard the saying “use it or lose it.” It’s most often applied to physical health and exercise, but that saying is also apt when it comes to a community’s health and the exercising of rights, particularly the right to free speech. Pittsburgh Community Television’s mission is to encourage the residents of the city of Pittsburgh and local nonprofit organizations to exercise their right to free speech, to get on their soapboxes so to speak, by providing the community with the training, tools, and platform to produce and broadcast their own television programs.

In decades past, citizens took to their soapboxes, literally, when they had something to say. They went to the town square, stepped onto a box, and began to shout their message. Today, in Pittsburgh with PCTV, that soapbox has gone high-tech, making your message more polished and professional and giving it the capability of reaching more people than ever before. 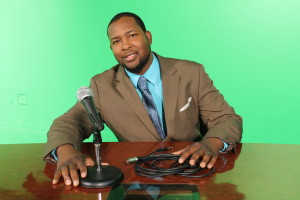 “We have more free speech than mainstream television,” said John Patterson, executive director for PCTV. “Essentially, everything makes it to air because we try to avoid impinging on free speech.” Because PCTV is not broadcast but is available on cable  (Comcast Channel 21 and Verizon Channel 47) it is not subject to FCC regulations. However, PCTV does have guidelines and producers submit their content before it is aired, but unless it is outrageously obscene or wildly inappropriate, everything is aired. And we do mean everything. Not only are serious issues addressed, but anything a producer may feel passionately about is welcome on the channel. The requirements are few: you need to be a city resident or nonprofit and had to have completed a few programming classes at PCTV’s facility. After that, you can start programming, or even develop, your own show.

PCTV has an eclectic line up of shows, everything from religious programming, to shows on sports or fitness, to one dedicated solely to the subject of UFOs. A sampling of only one days’ programming showed a range of interests from Karen’s Fishing Corner, MMA Fighting in Pittsburgh, and Fitness Gospel Aerobics, to Steel City Sports.

PCTV and the city’s goal is to make you the producer of shows. Located on the North Shore just off the West End Bridge on Western Avenue, the facility provides training at its completely refurbished production facility. The $350,000 renovation has now expanded the facility to include two studios, a classroom, edit lab, an equipment room, new lobby, and office space. “It is a huge improvement to go from having a very poorly laid out and dilapidated facility to what we have now, which is well designed and brand new. It’s a fantastic facility,” said Patterson.

Programs are even shot in high-definition, although the cable companies don’t broadcast them in high-def. However, PCTV’s programming is available online, with live streaming and on-demand programming, which makes the channel’s content available to those living outside of the city and to the globe via the Internet. 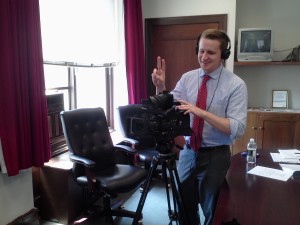 The channel, which has been around since 1986, is not funded by tax dollars, but through a cable franchise agreement the city has with Comcast and Verizon, and through grants and donations to the nonprofit. “Pittsburgh is fortunate to have PCTV. The larger cities in the nation have community television, but some smaller ones, like Cincinnati, have lost theirs because local governments have the power to decide if they want to have them or not.” Patterson said. “There has been a real erosion over the past five years because many cable companies have statewide franchise agreements that do not provide for local cable stations,” Patterson said. Non-city residents can volunteer at the studios or take classes, but it costs them a bit more.

In addition, to having a newly remodeled facility, the professional staff at PCTV has a wealth of broadcast knowledge and is eager to share it with anyone wanting to learn. “We have about 80 producers who come in on a regular basis, but we encourage more people to learn how to use the media to address issues in the community and to express themselves,” Patterson said.

PCTV also offers a series of classes and monthly workshops that will set students on the path to producing and programming. The Electronic Field Production course certifies a student to check out PCTV’s Panasonic HMC80 SD/HD field production equipment including cameras, tripods, and microphones, and head out into the field to create programs. The Introduction to Final Cut X class teaches the basics of editing. The costs for the classes are quite affordable. And even if you don’t see yourself as a program producer, taking classes at PCTV is a great way to learn tips and tricks of the industry for use personally or as a springboard to a career.

PCTV also offers internships and summer camps for students ages 13-17. “It’s phenomenal to see the kids we get in here. They are what are known as ‘digital natives,’ which means they have grown up and spent their entire lives in a digital world. Today, everyone is creating programming with their cell phone’s video capability. We can help them to refine their work,” Patterson said.

In addition, the channel offers affordable production services and facilities to for-profit businesses, filmmakers, or anyone else who needs to complete a video project. The fees charged for these services go directly to supporting PCTV’s nonprofit mission. You can also support PCTV by becoming an underwriter. 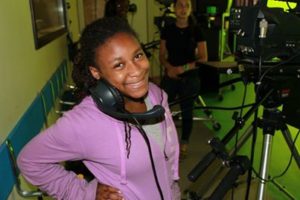 Some of the pressing community issues that have been addressed with programming have been poverty and violence, but not all the programming is so serious. “With PCTV you are going to see a variety of shows,” said Patterson, and the quality of some of the programming has at times even astonished Patterson.  “We used to have a producer here named Billy Heh who produced a show called The Magic of Billy Heh. The premise of the show was to show magic tricks and then reveal how they were done. Billy poured his heart and soul into every show in order to make it the best it could be. He paid attention to everything, including lighting and makeup. In terms of production values, it was a cut above. He no longer produces his show here, but he’s still out there doing magic.”

While what PCTV and its producers do may seem like magic to viewers of the channel, Patterson and his staff are all about demystifying the production process and providing Pittsburgh residents with the opportunity to learn about the city’s high-tech soapbox while getting their message out. Exercising free speech, now that’s real magic.

To learn more about PCTV, watch programs, or find out about how you can become a producer or supporter of PCTV, visit their website at: ww.pctv21.org.