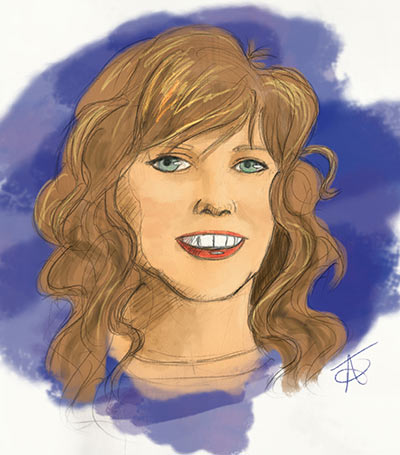 Runners know all about pushing through the pain to achieve their dreams, but the true measure of champions is how they react when their dream is stripped from them. Such was the case with Patrice Matamoros. She was from Montana and a champion runner in high school. She had hopes of competing in the Olympics. Sadly, a devastating injury in college ended her running career. She could have spiraled into self-pity, but instead she channeled the winning ways into completing her education and excelling at her career. When she married and began to raise her three children, once again, she gave that her all. She also brought that same work ethic and dedication when she began to volunteer.

A graduate of Old Dominion University, Patrice worked for Ford Motor Company. “I had a sales background, and I was able to use my skills to help many nonprofit organizations, mostly ones that aided women and children. The plan was to do galas, publish cookbooks, and acquire sponsorships. I volunteered for 10 years in three different cities: Annapolis, Philadelphia, and then when I came to Pittsburgh,” said Patrice.

For 19 years Pittsburgh hosted a marathon. After the 2003 race, the event fell apart when it lost its sponsorship. In 2008, Patrice and a friend took on the challenge of resurrecting the Pittsburgh Marathon. She wound up founding and becoming the CEO/Race Director of the nonprofit Pittsburgh Three Rivers Marathon, Inc., (P3R). It is one of the nation’s most well-respected health and fitness brands.

Using her own credit card and occupying a donated cubicle from the Allegheny Conference on Community Development, Patrice began seeking sponsorships and learning how to stage a world-class marathon. “A lot of what we did was serendipitous. I felt like Dorothy on the Yellow Brick Road to Oz; along the way friends appeared who helped me get the marathon up and running again.”

First, Patrice and her team had to recreate everything as previous marathon records were lost in a flood. She and other volunteers attended and worked at major marathons to study how they were run. Although the city was supportive, the number of permits and logistical considerations that had to be worked through were daunting. “It had been five years since the last marathon,” said Patrice, “and while the civic officials were behind us, many people were not happy to have the inconvenience of the marathon back. The route affects 60 churches and 70 bus routes, not to mention countless businesses.”

To the runners and spectators, the 2009 marathon came off flawlessly. However, Patrice knew there were some glitches, but the reviews that came in after the race were overwhelmingly positive. “Everybody seemed happy that the marathon was back,” Patrice said.

There have been obstacles along the way. In 2010, an abandoned microwave oven left near the finish line necessitated the calling in of the bomb squad. It proved to be harmless, but Patrice realized that they needed to be prepared for any eventuality, especially the threat of terrorism.

“Our marathon was 19 days after the Boston Marathon bombings in 2013, and we went into action consulting with anti-terrorism experts, the FBI, and local safety authorities,” Patrice said. “I felt comfortable going into the race because we planned well, though nothing is fool-proof. When reporters asked me if the race was safe, I pointed to my daughter at my side. I wouldn’t have taken her there if I wasn’t confident.”

Patrice and her staff have, once again, established Pittsburgh as a “running city.” For the city’s 200th Anniversary in 2016, P3R invited a runner from every single state in the country to serve as an ambassador. This provided an opportunity to showcase the city as a great destination for spectators as well as runners.

Not only does P3R’s highlight what Pittsburgh has to offer, but it has also helped the area in other ways. Its Run for a Reason charity program raised nearly $1.7 million for charities last year. Patrice estimates that Run for a Reason has raised more than $9 million since its inception in 2009.

In addition to the Pittsburgh Marathon, P3R oversees more than 200 other running events in Allegheny County. It has established itself as more than just the authority on running event planning. P3R promotes running by providing training programs and nutrition seminars. It also oversees the 1,500-member Steel City Road Runners running club, and Kids of STEEL, an exercise and nutrition program found in 140 locations in Southwestern Pennsylvania. It has involved nearly 16,000 children since its inception.

P3R was also the sponsor for the 2016 Women’s Health Conversations, the first consumer conference created to educate, empower, and entertain the women who influence the health of others. The three-day conference brought together doctors and lifestyle experts in Pittsburgh and featured U.S. Surgeon General Dr. Richard Carmona. More than 1,000 people attended.
Patrice and P3R’s efforts have not gone unnoticed. In 2013, she was named Sportswoman of the Year by Dapper Dan Charities, but Patrice credits the hard work of P3R’s staff and their army of volunteers who help runners to achieve their dreams. “P3R is all about being an organization that says, ‘ Look at us-we’re a race with a soul, and we give back to the city.’ “