My First Visit to Calvary Cemetery

The History Behind the Holiday: Rosh Hashanah

I was six years old the first time I went to a cemetery. It’s a day I remember clearly, even some 70 years later. I grew up in a family where there were a number of elderly relatives. For the first half dozen years of my life I was chiefly unaware of the deaths in my family. Then, with the passing of some distant aunt, I became acquainted with funerals. 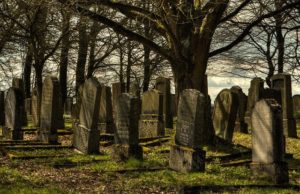 I distinctly remember walking up the unkempt path in Calvary Cemetery with my entire family,  complete with parents, a brother, aunts, uncles and cousins. The mood was somber and the faces were solemn. We made our way to the grave site where some great, great whoever bought a number of plots decades ago. As we walked, my older brother, Jack, was abnormally nice to me. He read the names off of the stones to me as we walked. Being four years older, he had made this journey often enough to recognize many of the names.

Jack pointed to the stones as he rattled off the names of the people underneath and talked about ghosts. He told me that most people don’t believe in ghosts, but if they were real, they would definitely be here in the cemetery. He said that if there were spirits in the area, chances are that they couldn’t really hurt me. But, he continued, if I did see a ghost, I should remember that even if they could hurt me, it probably wouldn’t hurt that much… Jack might claim that I was scared, but I will always assert that I wasn’t scared, I was just on edge.

The Tallest in the Cemetery

The grave markers to the right were small. Many of the names were worn by years of exposure, making them hard to read. All of the graves faced the same direction, so we couldn’t see names on the larger, more recent headstones to the left. Jack didn’t seem to be as interested in the monuments, until we passed what must have been the tallest in the cemetery. He gave a quiet, “wow,” and pondered out loud who was buried there. But, we had a casket to pray over as it was lowered into the ground, so we proceeded up the sidewalk without stopping to see.

After the ceremony was over, we made our way back down the long path. When we came upon the tall monument, Jack repeated his thoughts: I wonder who’s buried there. I wanted to know too, so I took off down the low slope to read the name on the front of the shrine. Plus, Jack was being so nice to me; it was the least I could do. I looked up the hillside at everyone as I walked up to the huge stone. My entire family, complete with parents, a brother, aunts, uncles and cousins, were all staring at me. I went around to the front of the monument to read the name. The laughter from my loving family was nearly simultaneous with my cries of terror. It was my name on the side of the tombstone.