The Times They Are-A-Changing for Pittsburgh 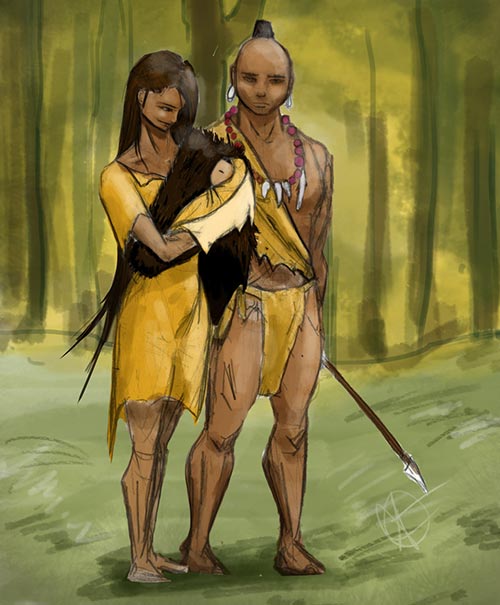 The story of how Meadowcroft was discovered is the stuff that makes for good folktales. On November 12, 1955, Albert Miller, a farmer and history buff, was out hiking through his land. It included a high cliffside alcove shielded by a rock overhang, somewhat like a stone awning. There he saw a groundhog dip into a hole. Curiosity led Miller to examine the hole closer, and he found bones near the entrance. Assuming that the groundhog had dug up the bones, Miller wondered what lay beneath the soil. His study of history had already made him familiar with the historic popularity of rock shelters in the area. He anticipated unearthing Indian artifacts. Miller later wrote that “about 12 inches down, I realized I was coming up with burnt bone and flint, which I knew was Indian. At about 30 inches, I found a complete Indian-made flint knife.”

He knew this was beyond his experience and feared others would exploit and loot the site. Therefore he covered the spot and never told anyone about his find. He decided he would reveal his discovery only when he felt that he’d come across the right archeologist whom he could trust with this treasure. Miller was a patient man. For nearly 20 years, he scouted out archeologists, taking some into his confidence. He never quite connected with anyone until he was referred to James Adovasio, Ph.D.

In the early 1970s, Adovasio, a young archeologist, took a position at the University of Pittsburgh and made it known that he was interested in exploring archeological sites near Western Pennsylvania. Soon Adovasio was put in touch with Miller, and when the two hit it off, Miller realized that he’d found his archeologist.

During those intervening years between Miller’s discovery and connecting with Adovasio, Miller and his brother Delvin Miller, a titan in harness racing, founded the Meadowcroft Museum of Rural Life, restoring old cabins, a schoolhouse, a barbershop, a church, and a covered bridge. The museum was overseen by a board, and they were able to purchase the land where the rock shelter was situated.

What is unusual about the Meadowcroft Rock Shelter is that it wasn’t a permanent settlement, but as some have described it, “a Paleo Holiday Inn.” The site is situated high above the banks of Cross Creek, a tributary of the Ohio River, which lies seven miles downstream. The overhanging sandstone ledges provided a shelter for roving bands of our early ancestors. It is believed that the early groups of travelers only stayed there for a few days at a time before moving on. They believe the shelter’s location was passed along by word of mouth. Eventually groups began to stay there for longer periods.

With the permission of the museum’s board, Adovasio and his archeology students began work at the site. When the team commenced excavating, they expected to dig only a few feet before hitting bedrock. They uncovered beer cans, then glass bottles, then colonial-era glass. But most importantly, they did not hit bedrock, which would have ended their excavation. What they uncovered next was initially disappointing, as they had uncovered rock. Adovasio and his group of students wisely realized that this was some rubble from the rock shelter’s roof that had fallen thousands of years ago. They suspected even more remnants from past civilizations may still be waiting to be uncovered.

What they found would shock the archeological world. It had been theorized that the first inhabitants came to North America’s great plains about 13,000 to 13,500 years ago. They would have traveled over a, now gone, land bridge from Asia. These people were known as the Clovis people. Evidence of these people had been found in New Mexico in the early 1900s. However, the team of scientists at Meadowcroft were unearthing implements and artifacts that were at least 19,000 years old. When they dug deeper, they began to uncover points, or sharpened stones used as tools. They were unlike any seen before in North America.

These points, called the Miller Lanceolate Projectile Points in honor of Albert Miller, gave evidence that there were advanced toolmakers living in the area before the Clovis peoples. This called into question the theory of how humans came to North America. Digging beyond where the Miller Point was found, Adovasio and his team found a tool named the Mungai knife. It is the oldest artifact found there so far. The Smithsonian Institution conducted radiocarbon dating on it, which confirmed the team’s findings. It dates back roughly 16,000 years.

When conventional wisdom is challenged, people are often reluctant to give up their long-held beliefs. Adovasio has had to defend his findings against other professionals who still believed that the Clovis people were the first to inhabit the area. With a third of the shelter still to be excavated, perhaps more evidence will be unearthed to satisfy Adovasio’s skeptics.

According to an article in Humanities magazine, to date, an astonishing 10,000 artifacts have been recovered from the Meadowcroft Rockshelter dig. As well as more than 950,000 animal bones and more than 1.4 million plant remains.

You can visit this incredible excavation site now known as Meadowcroft Rockshelter and Historic Village. It is part of the Senator John Heinz History Center museum system and as such is affiliated with the Smithsonian Institution. During the 1990s, Meadowcroft was opened to the public. In 2005, the site was designated a National Historic Landmark by the U.S. Secretary of the Interior. An enclosed visitor observation area makes this remote site accessible and helps to preserve this treasure.