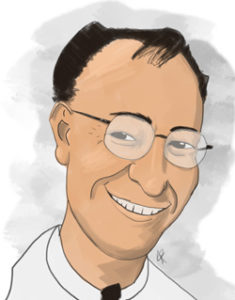 Humanity is truly fortunate that Jonas Salk choose medicine over his original goal of becoming an attorney.  Or perhaps we should thank his mother, who never thought he would be a good lawyer!  Whatever the motivation—love of medicine or a mother’s desire—Jonas Salk started down a path that would save many people from the devastating disease of Polio.

Jonas Salk’s story started in New York City in the year 1914.  As the children of Russian-Jewish immigrants he and his younger siblings (two brothers and one sister) were encouraged to take their studies seriously. After completing high school, the young Salk entered City College of New York, before attending NYU School of Medicine. He was a first-generation collage graduate.

While in medical school, Salk listened to two lectures which contradicted one another.  That got him thinking about whether you could immunize someone by using a live virus without infecting the patient with the disease. An opportunity to get an answer to that question came in his final year of medical school while he studied the Influenza virus in a research laboratory. A few years later, Salk, along with Thomas Francis, developed the modern flu vaccine. This set the groundwork for his work on polio. 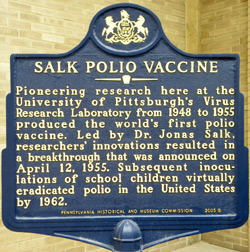 In 1947 Jonas Salk took the job as Head of the Virus Research Laboratory at the University of Pittsburgh School of Medicine. Here, he continued his work on influenza while also beginning his study of the polio (paralytic poliomyelitis) viruses. The National Foundation for Infantile Paralysis funded his research.

At the time, the polio virus affected approximately 25,000 people annually.  It was highly contagious and caused paralysis by getting into the spinal cord of the infected person. No one knew who or where it was going to strike. People often moved their families, sometimes to other countries, in the hope of escaping the virus. But there was no safe place.

Though it took eight years of hard work and the assistance of many colleagues, Jonas Salk finally announced the creation of a vaccine made from a dead virus. This technique was contrary to the era’s scientific opinion of using a weakened form of the disease. To Jonas, it only made sense to eliminate the risk of infection by using a dead virus. Since the development of the vaccine, polio has been virtually eradicated in the countries where it has been in use.

The Salk Institute for Biological Studies was founded in La Jolla, California in 1963 by Salk, himself. His years after he left Pittsburgh were spent writing books about the nature of evolution and human life, conducting research, and searching for a vaccine for AIDS. Jonas Salk lived until the age of 80 and died on June 23, 1995, of congestive heart failure.

His three sons have followed their father into the practice of medicine despite his initial attempts to discourage them from going into this field.  The youngest son is a psychiatrist while the two older sons are more involved in research.  Salk’s wife, Francoise, was an artist. Salk often thought of his work as a scientist was much like the work of an artist; both require creativity and are more of a “calling” than a job.

Salk felt that it was necessary to have a purpose in life. His work saved many from the devastating effects of polio.  He truly left this world better than he found it.