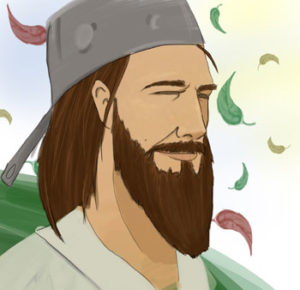 There have been many occasions where someone’s life is so unusual that it will inspire a legend. This is the case with John Chapman. It is fabled that he ventured across the frontier planting apple trees. This would lead him to be known as Johnny Appleseed. Most have heard of his adventures through the many books, films, cartoons, and works of art about his life.

John Chapman was born on September 26, 1774 in Leominster, Massachusetts. His father, Nathaniel Chapman, fought in the Revolutionary War just a few years later. He was at the Battle of Concord as a minuteman and later served in the Continental Army under General George Washington. While their father was away John’s mother died in July of 1776 during childbirth. This left John and his older sister, Elizabeth alone with a newborn. The baby would sadly pass away two weeks later. It is believed that relatives took in John and Elizabeth. Very little is known of Chapman’s childhood. It is known that his father remarried in 1780 to Lucy Cooley. Together they had 10 more children. It is reported that in his adolescence he apprenticed at a neighbor’s apple orchard. This is when he learned the apple business.

It is rumored that in 1792 at the age of 18 John went west.  His half-brother Nathaniel would have been 11 at the time and is believed to have traveled with him. The two would live a nomadic life until 1805. John and Nathaniel would then join the rest of their family who moved to Ohio. John was already known to travel and produce plant nurseries in the mid-West. By the 1820s John had acquired the nickname “John Appleseed” in Ohio.

Most stories depict him as scattering apple seeds across clearings in the wild frontier. In reality he would visit cider mills to pick out apple seeds from the residue left after making cider. He would establish nurseries by first clearing the area. Then he would build a fence with brush to protect the young trees from wildlife. He would camp nearby to tend and protect the nursery. Once the nursery was well established he would sell, trade of gift it t a local frontier family.

While some depict him as giving away apples, Chapman was essentially a businessman. He leased or bought property for his nurseries, usually locating them along sources of water. Nurseries seemed to be established just ahead of the next wave of immigrants. He was also a very generous man, almost a missionary.

He was an adherent of Emanuel Swedenborg, a Swedish scientist who founded a sect of Christianity called the New Church. Urbana University in Urbana, Ohio, which was founded by the Swedenborgian Church, believes that it was while Chapman was living in Western Pennsylvania that he became a member of the church.

While many accounts of Chapman’s life gloss over the years he spent in our area, they were very crucial in forming the man who became Johnny Appleseed. A book published in 1930 by Henry Chapin titled The Adventures of Johnny Appleseed illuminates the impact Pittsburgh had on him.

He is believed to have been living in the area during the Whiskey Rebellion. However, its unknown if he was a part of it. Whether he was a part of it or not he certainly would have had an interest in its outcome. Despite popular belief, his sole purpose in planting apple trees was not for the purpose of supplying them to settlers. Most of the apples he planted were used in the making of cider, distilled apple brandy and applejack. Apples grown from seeds are usually too sour for eating out of hand and therefore mainly used for this purpose.

There is a historical marker near Franklin on French Creek  in Venango County, Pennsylvania. It states that Johnny Appleseed lived there from 1797 to 1804. It also states that he had a nursery there as well as one near Warren, Pennsylvania. To this day Franklin hosts its Applefest Festival every October. Other local accounts declare that in 1801 he shipped 16 bushels of apple seeds from western Pennsylvania down the Ohio River. This was most likely in preparation of his families relocation there a few years later.

He spread more than just apple trees across the frontier. Like John the Baptist he spread God’s Word. it is said he, “traveled hundreds of miles on foot wearing a coffee sack with holes cut out for arms and carrying a cooking pot, which he is said to have worn like a cap over his flowing hair.” His outfit must have been strange but his reputation was admirable. He was able to get along well with both the Settlers and Indians in the mid-West.

It is believed he traversed thousands of miles west into Indiana from Ohio. He died there in Fort Wayne March 12th 1845 and was laid to rest. He may not have been in Pennsylvania most of his life but he made a huge impact on its development.